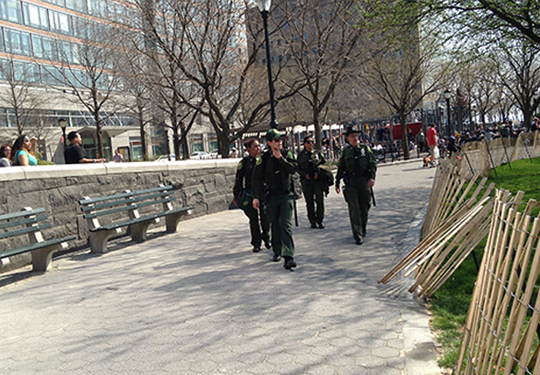 Dozens of people drawn to Battery Park City’s Rockefeller Park for the first beautiful day of spring after a particularly brutal winter had their happy day rained on by several park police officers who aggressively drove them out of the outdoor oasis.

Despite the presence of multiple signs clearly stating the park to be opened in Mid-April…and the 70-degree temperatures, the uniformed officers were adamant in their demands that the open grass lawn facing the Hudson River be immediately evacuated.

“They were aggressive,” says outraged Murray Street resident Brandon Hubbard. “It’s crazy to kick out children and families when it’s 75 degrees out here and it’s the middle of April. The signs say the park should be open. What’s the justification for this?”

The evacuation of the facility occurred at approximately 3 p.m. after the park goers had been enjoying the lawn for quite some time. The lawn was surrounded with temporary fencing with openings that people could freely pass through.

Several park-goers expressed exasperation that the officers would put so much time and focus into expelling families and children from the lawns when skateboarders could be clearly seen breaking park rules by riding on benches and sculptures and pedestrians clearly continue to violate the bike lanes, greatly increasing the chances for serious accidents.

People gather in Rockefeller Park to enjoy one of the first sunny days of spring following the brutal winter.

“It’s a bit annoying,” says Clem Lee of Chinatown. “This park is supposed to provide people who live down here and pay their taxes a relief from winter. We didn’t tear open the fences. It was open.  I could understand if there were no park rangers around to protect people, but there are plenty. They should be using their energies to ensure that people are having a good time, not to throw them out.”

The fence openings at Rockefeller Park where people were free to wander onto the lawn.

For their part, the uniformed officers stated they were simply carrying out orders. “This lawn is out of our jurisdiction,” said an Officer Perez when questioned about confrontation with park goers. “All we are doing it enforcing the rules of the Battery Park Conservancy.”

The officers told the park goers that the park would officially open on Monday, April 14, which puzzled many and disturbed the kids who would be in school. When one of the children said that it was supposed to rain on Monday, one of the officers dismissively commented, “Enjoy the rain.”

“They were rude,” says SoHo resident Wendy Lester. “They told us we were trespassing and this is a public park.”

Park fences being removed on Monday, officially opening the lawns to the public.

“I saw one cop yell at a little girl,” said Oberon Sinclair. “The woman was like a prison guard. My business is down here. I’ve been here through 9/11 and Sandy and we pay our taxes. We don’t deserve to be treated this way.”

The disappointed kids were forced to leave the location and later chased off the lawn at neighboring Teardrop park by the same officers. Park-goers visiting from other states, were appalled at their behavior.

“They weren’t polite at all,” says Connecticut’s Catherine Mullin. “Their comments were inappropriate and set a bad example for the kids who had to hear them.”