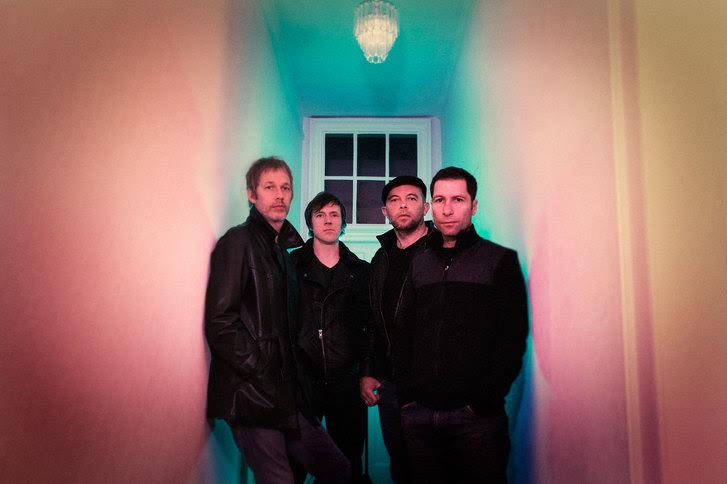 Imagine co-founding one of the most influential British bands of the 1990s, going on to inspire bands like Coldplay, Ash and Death Cab For Cutie. Then for your next band, you pump out a few more hit singles. Then you join Oasis, arguably the most successful English band of the past two decades, for 10 years. Then once Oasis disbands, its lead singer requests that you join his next band. Then shortly after Beady Eye fizzles out, your original influential band reunited. Well, such has been life for Ride frontman Andy Bell.

While Ride did experience international chart success with 1990’s Nowhere, most of their acclaim in the U.S. came from critics. But time has been very kind to Ride’s legacy since their 1996 breakup, with Nowhere finding its way onto a myriad of lists including Pitchfork’s “Top 100 Albums Of The Nineties” and Spin’s “The 300 Best Albums On The Past 30 Years.” In turn, it may have surprised many that Ride easily sold out New York City’s Terminal 5 – with a reported capacity of 3,000 – and Music Hall Of Williamsburg back in June.

Alas, Ride are back in New York by popular demand with a pair of September 2015 gigs. On September 21st and 22nd, they will be playing at Irving Plaza, as presented by Live Nation and Noisey. The billing for the show on the 22nd will come from Montreal quartet The Besnard Lakes, two-time Polaris Music Prize nominees.

In support of these Irving Plaza gigs, Andy Bell kindly entertained some questions from me for Downtown. While Ride is likely to be continuing past this tour, per Andy’s answers, plenty of other Andy-related music is the pipeline. He recently scored the forthcoming Steve Marriott biopic titled The Midnight Of My Life, produced the fifth album by Sweden’s Weeping Willows, and has worked on remixes for the likes JMRS and Penguins Rising.

However, none of this is meant to take anything away from the other three-fourths of Ride. Guitarist and co-songwriter Mark Gardener has been releasing solo albums – including a 2003 live album that was recorded at Manhattan’s Knitting Factory – beyond writing and producing for other artists. Drummer Lawrence “Loz” Colbert, sometimes referred to as “the shoegaze Keith Moon,” plays with Supergrass frontman Gaz Coombes. Bassist Steve Queralt walked away from life as a professional musician after Ride’s initial disbanding in 1996, but has been back in the fold since the 2014 reunion. Alas, you have a classic lineup set to sell out Irving Plaza twice.

You’ve always managed to work, as you jumped from Ride to Hurricane #1, then had Oasis and Beady Eye tenures with some short Ride reunions and Grapefruit solo work added in. Is this the product of luck?

Andy Bell: After Ride, I was initially going to do a solo album, but [Creation Records founder] Alan McGee persuaded me to put a band together. That was Hurricane #1. When that finished, I was taking some time out and during that time I was contacted by Oasis, which eventually led into Beady Eye. It’s all kind of flowed into the next thing. I never considered stopping. I will always make music and I have a strong work ethic.

Have you ever had interest in revisiting the Hurricane #1 period of your career?

A: I’m proud of what we did as a band, but I don’t have any plans to revisit that era. The band have recently reformed and started doing shows and I think an album is on the way.

There’s a rumor that in your early tenure with Oasis, that you were paid £85 a night. Is that true?

Per your upcoming tour dates, is Ride back for good? Or is the band taking it one tour at a time?

A: We are blown away by the reaction we’ve received. From an initial announcement of three weeks of gigs, it has become an eight-month world tour. Our plan is to take this all around the world and then see how we feel about stuff then.

Matthew Caws from Nada Surf once told me that Ride was the loudest band he ever saw live. For those likely to attend one of your Irving Plaza shows, should the same loudness be expected?

A: We do like volume. Usually we are about as loud as the venue will take. Some places have sound restrictions — hopefully that doesn’t apply to the Irving Plaza. But don’t worry, it’s not a sound that hurts…much.

What do you remember about your first-ever gig in New York City?

A: New York was different place in 1990 than it is now. Edgier, felt a lot more dangerous to be out and about. The gig I don’t remember much about, but I definitely remember New York for the first time. I felt like Jon Voight when he arrives in New York in Midnight Cowboy.

People tend to know your discography, but little about Andy Bell the person. Is there something you wish more people knew about you?

A: I let the music do the talking, there’s not much more to me anyway!

What’s ahead for you once those Ride tour has wrapped? Any production gigs?

A: When I’m not doing Ride, I continue to work on other stuff, such as scoring for film and TV, writing collaborations, the occasional remix, very occasional DJ gigs. I still would like to put out my own record some day.

Who is the best band in the world that our readers may not currently know about?

A: Planet, from Sydney, Australia.

Finally, Andy, any last words for the kids?