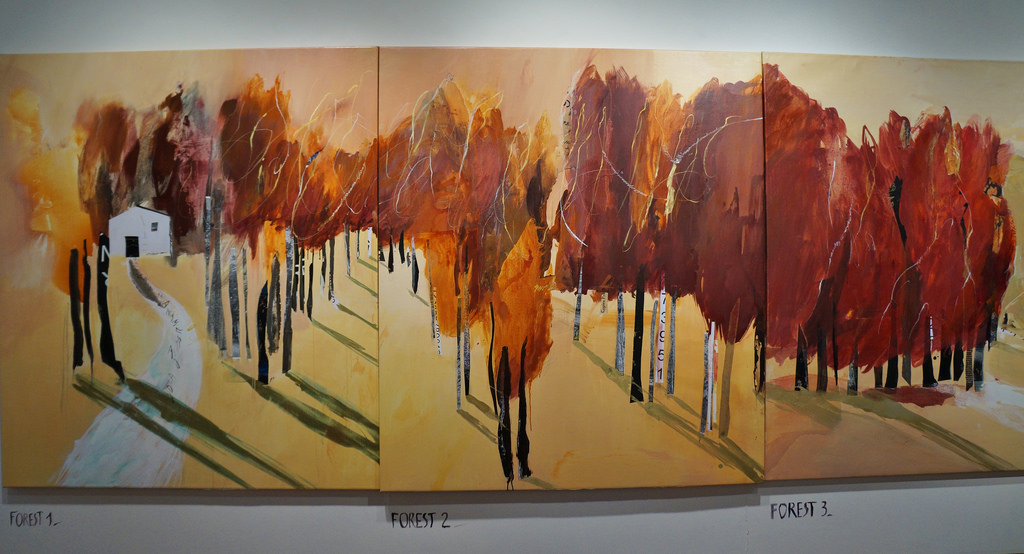 Inside Soho’ s Campton Gallery there is a little piece of Spain, just waiting to be seen.

Renowned Spanish artist, Regina Saura, is featuring an exhibition  Through the Forest featuring  two years of her creative works from her studio in Emporda, a beautiful village in the breathtaking Catalonia region of Spain. It was there that Regina spent her time reflecting on the many facets and complexities on life, nature, and the human condition.

Upon entering the studio, there is a wall with an amalgamation of 15 paintings angled one in front of the other to form an 85-foot canvas mural. The space, designed specifically for the exhibit, instantly envelops the viewer in panels upon panels of autumn trees mingled with various mixed media comprising oil paint, silkscreen, collage, lithography, and scraping.

Complementing the main piece are paintings evoking the change of  seasons in her native Spanish village. “I love to be in this sensibility; it is very close to me, like a friend,” Saura said of the forest. “Many changes happen – fire; snow; wind. This painting is very special because it’s one big photo.”

She explains that this subtle effect begins with color: “I like to work with acrylics, not oil,” she says, explaining that the former allows for more nuance. She is surrounded by  slivers of newspaper and magazine clippings, some with seemingly random words like, “weaken,” “decay,” and “collapse.”  She explains by saying “I would be alone in the studio, and sometimes I like to talk to myself. These are poems I’d write to express how I feel.”

Being familiar with Catalonia or Spain is not needed to appreciate this exhibit. All you do need is an open mind and an appreciation of the aesthetics of nature.  The triumph of Through the Forest lies in its universally emotional and aesthetic appeal. “I want to play with more mixed media to incorporate into her clothing designs,” remarked patron Danielle Malin, an artist in the fashion industry, observing, “I love the use of color and how evenly they flow. Each piece is just as stimulating as the next, with the mix match of material. It’s beautiful.”

Saura has been sharing her work internationally since 1984 with exhibitions throughout Europe, Japan, and the US. She is well-known for her mural, L’Illa Diagonal in Barcelona.

Through the Forest will be on display at Campton Gallery through March 31. For more information, visit www.camptongallery.com.