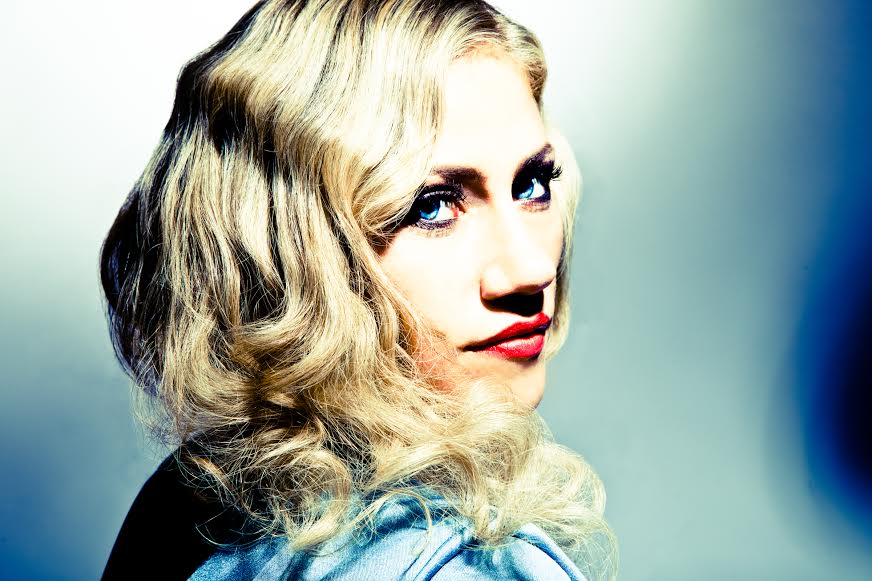 Lucy Woodward is one of those artists that five people may recognize from five different projects. A lot of people would know her for her major label career, having released albums on Atlantic and Verve, which led to appearances on TV shows and concerts stages around the world; one of her singles on Atlantic became a major global hit for Stacie Orrico. Many people are familiar for her work supporting other artists, touring as a vocalist with artists as diverse as Pink Martini, Snarky Puppy and Rod Stewart. Some people would know her as a top jingle singer. However they know Lucy Woodward, that singing voice is powerful and distinct.

While Lucy is based in Los Angeles, she is a native New Yorker with a number of New York-based projects going on at the moment. Currently on tour with Rod Stewart, she is in the midst of finishing her follow-up album to 2010’s Hooked!. Lucy went into more depth about some of these projects within our conversation, also describing how she manages to stay productive amongst the busyness.

When was it that you knew that you were going to be a lifer as a musician?

Lucy Woodward: My parents were both musicians, so all of my childhood I was music-making and creating. Ballet, drawing, playing instruments, harmonizing in the house all the time. When I was eight years old, I wrote stories obsessively. My grandmother noticed the the “writer’s bump” on my third finger, and while I was embarrassed about it, she was proud. I knew I was a lifer at “creating” things very young. My first concert was Debbie Gibson at Radio City [Music Hall]. I cried all the way home because I so deeply wanted to sing with a band. Saw Madonna’s Blonde Ambition tour that same year and also sobbed all the way home. I felt spiritually connected — not only to Madonna but just to “it.”

When someone finds out that you’re a musician and asks you if they’ve heard anything that you’ve worked on, do you have a stock response? Or credits you’re more likely to tell them?

L: Oh, the secrets! I’d rather talk about them! I guess it depends how on deeply they want to go into the conversation. You can usually tell very early on what they really are interested in. Sometimes they just want to know what famous people you’ve sung with. Sometimes they want to talk about the music business, or what inspires writing a song and I’m all about that. If I don’t feel like being chatty — plane rides — I say I sing jingles because it’s a very finite conversation!

Although you’d identify as a musician, you do a lot of different things between jingles and session work, recording and touring as a singer/songwriter, performing as a sideman — for a lack of a better term — with Rod Stewart and Snarky Puppy, and doing side projects like The Goods and The Joshua Shneider Love Speaks Orchestra. Did I miss any titles or roles there?

L: For as long as I can remember, I have always had different projects happening simultaneously to get all the creative kinks out. I need that fuel to feed that fire! Some projects pay the rent, but some don’t and that’s totally cool. A few years ago, I toured on and off with Pink Martini and had to learn a whole bunch of languages in a five days because I was filling in for China Forbes, their singer who had to go on immediate vocal rest. Most challenging gig I have ever had — fun. I have a little bluegrass band with friends in NYC I jam with when we can all get together. I’m also developing a show with some other friends in NYC about girl groups in the ’60s and I’m tinkling with a Peggy Lee covers record and an ’80s EP. I also sing with The David Ricard Big Band in L.A. and we’ve been recording all year. I love the energy of working with loads of different people. That in of itself, inspires the hell out of me.

How is it that you’re able to juggle so many projects at once? Is there a specific app or tool you use? Do you live in iCal or Google Calendar?

L: When I get the stomach virus, I know I’ve taken on too much! I live in iCal. I stare at it throughout the day, and look at those little rectangle events like it’s a goddamn game of Tetris. It’s horrible. I wish I was kidding.

How does life compare for you on-stage and in the studio versus off-stage and just being a regular person?

L: An ex-boyfriend told me once that he wished I was a normal girlfriend. I cried, of course, and we broke up.  I “normalize” myself when I get off the road by baking — I’m not that great. I get super-domesticated. On the road, everything is in Ziploc bags, so it’s fun for me to take a tea bag out of an actual box of tea from a cupboard. I appreciate those cupboards very, very much.

What’s looking ahead for you at the moment in your solo career?

L: I have just spent the last year and a half jumping on and off the road to work on my next — and fourth! — record with Henry Hey and Michael League in NYC. We have done a lot of playing together over many years, and it was really exciting to make something together simply because we trust and like each other so much. It’s made up of heavy masculine horn arrangements and feminine vocals, and I think that dichotomy really embodies who I am as a singer. Nic Hard mixed it and added some amazing “left” vibes to it. It was a real love project and I can’t wait to perform it. We are mastering it now and I’ll be putting it out in early 2016. In the meantime, I’m going to sign to GroundUp Music, Michael League’s label, and work on some mini-releases for the rest of this year. I am really pumped about it all…

You’ve played the major label game for a good chunk of your career. Looking back, are you nostalgic for that in any way? Or is it more preferable to be able to pick and choose what you work on?

L: I have always been able to pick and choose what I want to work on, but of course on a label, something always has to get approved by someone, and it’s a boring wait of a game. I won’t lie, I do get nostalgic for the old school budgets that were put into making records — but who doesn’t? I still get statements from my first record deal saying I now only owe -$1,000,000 something dollars. I laugh and want to post the statement every time! It’s a total joke how much money people used to put into breaking a new artist because they’d spend it on the wrong thing, like dinners, not artist development. It’s been an amazing experience working on this last record because Henry Hey, Mike League and I are all super close, and daily it would go something like: “That feel good to you? Yeah? Me too. Let’s move on…” We wanted each other’s approval and didn’t have to wait for anyone else’s.

If all went as planned for you, how would you be spending most of your time? Would you be touring? Doing more recording than touring? Focusing on writing?

L: I feel I never have enough time to write when I’m on the road. It’s just a different brain. But lately, I find myself committing to finishing lyrics on short plane rides because I know we have to land at some point and it’s a good, short concentrated “push” for myself; I totally sound like my mother right now. I love, love, love touring, though, when the project/people are awesome. Rod’s band is super family [oriented] and so is Snarky Puppy. Whether it’s a stinky tour van or a private jet, it’s all in the hang. I love the studio because it’s a laboratory and everyone is just a bunch of chemists making cool, new shit. I fall into a deep, happy groove with both the studio and touring.

What was the “big break” that led you getting your first record deal?

L: I was rejected all the time for a long while playing Bleecker Street [venues] and singing for executives in their offices. I really don’t know how I stayed so positive hearing “she’s not ready yet” all the time. But it was true. I wasn’t ready. My songs weren’t that strong yet and I had to work on my stage presence. I just needed to sing more. So I did all that: wrote more, collaborated more, gigged more. Judy Stakee at Warner/Chappell signed me and she took me under her wing and developed the heck out of me — hooking me up with other writers like Jamie Houston, Kevin Kadish and John Shanks. Vini Poncia, my manager at the time, started this idea called “Dumb Girls” and Kevin Kadish and I finished it, and Kevin did an amazing track. Ron Shapiro, who was president of Atlantic [Records] in 2002, fell in love with the song when I sang it live in his office one night. He took me up to Ahmet Ertegun’s office and said “listen to this voice.” Ahmet kissed me on my cheek and gave me his blessing. All that happened very, very fast. Made the record, video, radio tour, Jay Leno, Japan and.scene! It was over! But that was basically the journey leading up to my first release. Tommy Mottola signed me to Epic [Records] a couple of years before that but that record never happened — thank god!. I wouldn’t change any of this “up and down” record label heartache for a second, though.

Given your more DIY-oriented career path coming out of years of playing the game, what advice would you have for an artist that’s just starting out now?

Do you still get star-struck? Are there any artists you’re still hoping to collaborate with “one day?”

L: I’d love to do a duet with Tony Bennett or Trent Reznor or Brittany Howard from Alabama Shakes. I’d sing backup for Bjork for free. In fact, I’d pay her to have me sing backup for her! I can’t remember the last time I got star-struck. Sometimes I just worship my friends if they’ve just shared a new film or song with me that they’ve just completed.

Finally, Lucy, any last words for the kids?

L: Get off Facebook and start engaging in the world a bit more! I love me some Facebook but when I realize I have been only reading the news on Facebook, I think, “go outside and play, Lucy.”