Profile of a Collector: Alan L. Paris and a Century of News Photos 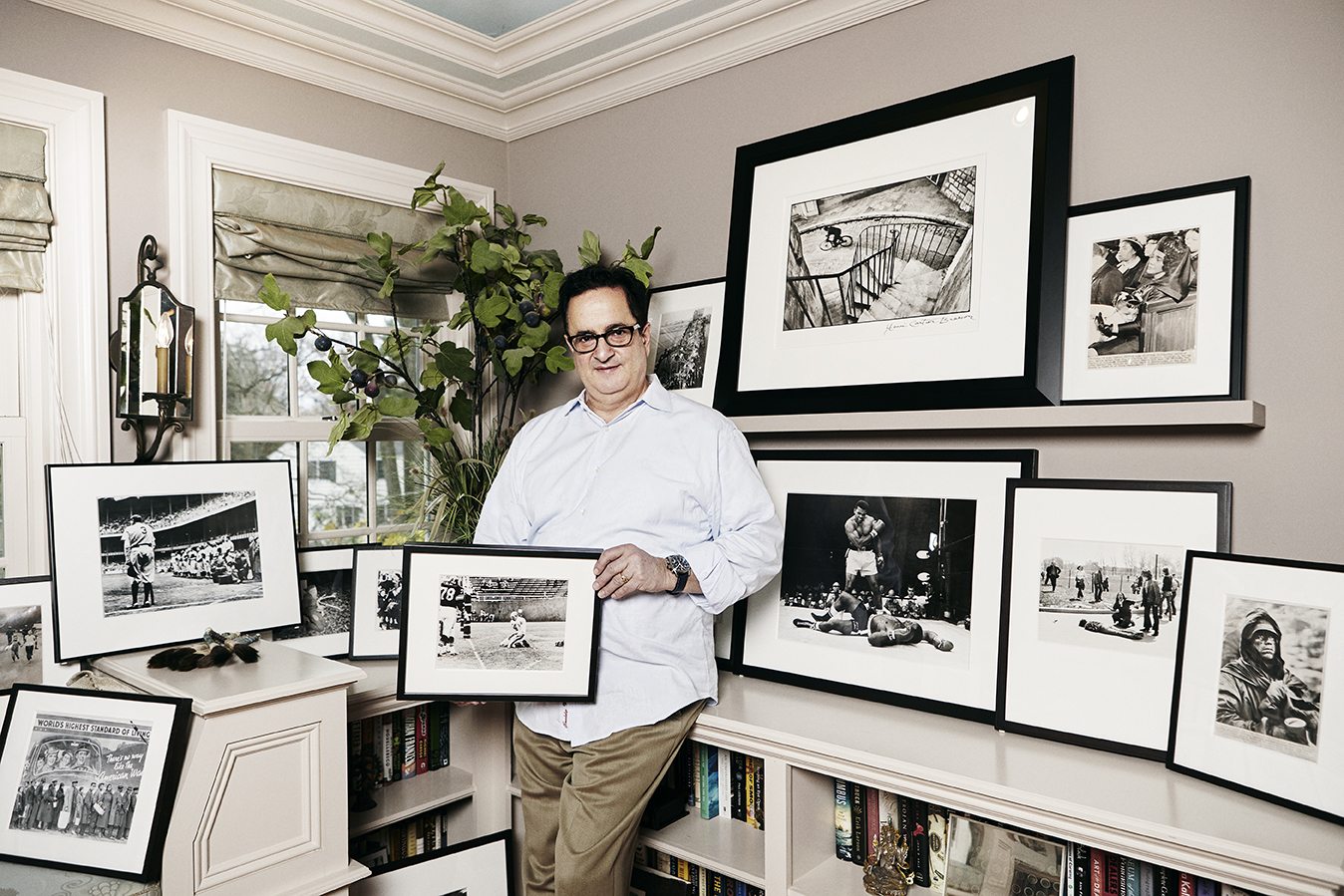 The grainy photo of the masked terrorist at the 1972 Munich Olympics—which was one of the first images of terrorism ever recorded and broadcast across the world—. And Coretta Scott King, the wife of Martin Luther King, as she appeared at his funeral in 1968.

These images are part of our country’s collective national consciousness. As iconic as they are, there is something truly arresting about seeing the photographs in person. Holding an original vintage news photo in your hands has the power to drive the truth home. There’s an aura. It makes history real.

For Alan L. Paris, who recently placed a vast and diverse collection of 20th-century news photographs at the Briscoe Center for American History in Austin, Texas, the interest in collecting these documents and images is rooted in part in that fact that his father was a battlefield photographer during WWII.

Today, Paris (56) works as a financial consultant in midtown Manhattan, but as a kid, he spent his after-school hours sweeping and mopping the dark room of his father’s New Jersey photography studio. And for the past twenty years, Paris has been slowly amassing one of the most compelling archives of 20th-century photojournalism and war photography to ever be brought together in the same collection.

The Briscoe Center for American History, which recently acquired the collection, is an archival institution at the University of Texas at Austin dedicated to preserving our nation’s history. The museum will make the images available to scholars, students, researchers and the public.

The photographs are definitely worth admiring. To do so is to take a powerfully visceral lesson in American history.

Photo: courtesy of the Briscoe Center

What started the collection was a rare picture of the Kennedy family, which Paris chanced upon at an East Village flea market in 1987 or 1988. The photo had been taken right after JFK’s election and shows the whole family together.

“That was probably the first photograph that was non-ephemera,” said Paris. “It wasn’t just paper-based stuff.” The picture became the first in his collection of presidential images.

Over the years, Paris built relationships with dealers who weren’t part of the ordinary fine art world. He met a militaria dealer who bought and traded in items like badges and insignia. This dealer complained to Paris that he had several boxes of war photography that he couldn’t sell. Paris bought all of them—about 3,000 photographs.

“You go through a thousand pictures and you find a handful of gems that make the whole thing worthwhile,” said Paris. “You have to know what you’re looking for, and you have to persevere.”

In his early days of collecting, Paris preferred to buy in bulk. He met another collector who frequented estate sales throughout Connecticut and New England. This man had filled up his house, garage and barn with items acquired at various buys and sales. He had boxes of old news photographs that he wanted to get rid of, so Paris bought him out.

“We had to meet face to face, of course, and he wanted a cash payment. So we agreed that we would meet off of I-95. We met in what was at the time the parking lot of a defunct restaurant,” Paris laughed at the memory. “The guy opened his trunk, and picked up these boxes and put them in my car. It felt like a drug deal. I thought, ‘What are we going to say if the cops show up?!'”

On Ebay, Paris found Robert Capa’s photo of the American landing on Omaha Beach during D-Day. This is the famous image of the soldier wading ashore in the surf—the picture is blurry because shells were pounding the beach.

“It was listed as a ‘buy it now’ for $69. So I bought it, and I held my breath until it came in the mail,” said Paris. “I couldn’t believe my luck. It was a vintage print that came out two or three days after the invasion. I was later told by some dealers that print is worth between 18 and 22 thousand dollars.”

Eventually, Paris was storing over 10,000 photographs in folders and boxes at his house. He devised a filing system and organized the entire collection with his wife and son. They inventoried the photographs alphabetically by country, and chronologically by particular battles, or “theater of war.” The collection that went to the Briscoe Center included images from World War I and II, the Great Depression, the Vietnam War, the fall of the Berlin Wall and the collapse of Yugoslavia.

Paris realized he couldn’t appreciate all of the photographs at once, so he began contacting museum curators and photography institutions. Curators and art handlers started to visit his home in Westchester to appraise the collection and request loans.

“My wife didn’t think I was completely crazy anymore. Lending photos to museums, it had the effect of legitimizing my interest in this stuff,” Paris explained. “I’d done something kind of good here, by pulling this collection together.”

The curator from the Getty Museum visited Paris’s home, as well as the curator from the San Francisco Museum of Modern Art. He lent parts of his collection to their exhibit, Exposed: Voyeurism, Surveillance and the Camera Since 1870; as well as to a show at the MET about photo alteration before Photoshop; the Morgan Library and the Museum of Fine Arts Houston. The Museum of Fine Arts Houston has only accepted a loan with more photos once before—from the Imperial War Museum in London.

Many of those loans eventually became gifts, so they’re now part of the permanent collections of their respective new homes.

In early 2011, Paris began researching institutions with the capacity and resources to acquire his entire collection, but it wasn’t until 2015 that an art dealer introduced him to the Briscoe Center, at the University of Texas. It was a match forged for the history books.

The Briscoe Center specializes in preserving documentary material of key moments in U.S. history. It’s an ideal home for Paris’s well-curated collection, which groups rare presidential snapshots and historic moments in sports history—alongside images of of 20th-century warfare—in a way that inspires awe, patriotism, and sometimes grief and horror. All together, the collection glitters with an aura of American authenticity that is difficult to replicate in words.

“Of particular historical value are 156 images by photojournalist Jacques Lowe, whose archives were destroyed in the terrorist attacks on September 11, 2001,” said Don Carleton, executive director at the Briscoe Center. “Lowe was President John F. Kennedy’s official photographer, and for the center to now have copies of his images that can be utilized for research is something special indeed.”

The Alan L. Paris collection will soon be made public at the museum, appearing alongside the Walter Cronkite papers an other notable archives.

Most specifically, the collection defines 20th-century history from a photo-journalistic perspective. It covers everything from the Spanish-American war of the early 1900s to the fall of the Berlin Wall in the 1990s. It basically covers the time that gelatin silver prints (or black and white prints) were made and distributed by news agencies.

Many of the photos in the collection were wired to American newspaper offices from overseas. You can see the streaks in some images from the way they were transmitted. Fax technology at the time printed images out backwards, so the photos actually had to be reversed again to appear the right way in newspapers.

Digital photography has changed all that. Gelatin silver print retouching and other early forms of photo-editing techniques are a dying art.

Newspaper offices used to keep their own image galleries, sometimes in massive warehouses. But today that’s disappearing. A lot of images are getting digitized, but a lot are getting thrown out. This is truly the end of an era.

Journalism is moving into the 21st century. If it weren’t for the diligent interest of historians, dealers, and avid collectors like Paris, many artifacts of the last century would get left behind.

“When you’re a collector, it’s really important to have a good relationship with dealers who know their stuff and keep you in mind when they discover new finds,” explained Paris. “Ultimately it’s a really small world. There’s only a handful of dealers who handle this material.”

In addition to news photos, Paris collects fine art photography, and he enjoys traveling with his family and maintaining his home in Westchester. He continues to collect in the field of photojournalism, but he’s more specific about what he’s looking for. For example, today he’s less likely to buy in bulk, and he pays careful attention to the condition of the photos and documents.

“I’m always looking for the best examples of iconic news photos. They’re still out there and they’re still available, and I love this stuff.”

The next time you find yourself in Austin, Texas, pay a visit to the Briscoe Center. It will surely give you a new appreciation for American history.