Olivia Palermo Is a Chic Bride in Shorts 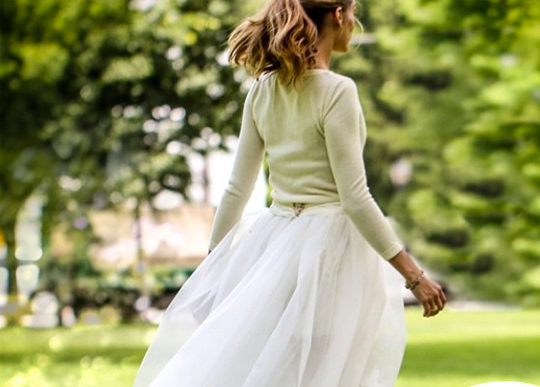 Socialite and former reality star Olivia Palermo turned the tables (and heads) of the style community, when she married her longtime boyfriend Johannes Huebl in Bedford, New York, this weekend. The three-piece outfit was designed by Carolina Herrera. Palermo wore the ensemble for the cover of the June/July issue of Brides magazine which was a departure from the expected traditional wedding gown. Yet, she managed to look stunning and effortless.

Palermo was a vision in a cream cashmere sweater nestled in a flowing tulle skirt and pair of white shorts. To complement her understated elegance with “something blue”, she opted for the embellished cobalt blue Manolo Blahniks that Carrie Bradshaw wore when she married Mr. Big in the Sex and the City movie. She kept her appearance simple with flowing ponytail and natural makeup that completed her sophisticated demeanor.

The couple exchanged vows in a park tucked away in the romantic countryside setting on Sunday afternoon, surrounded by a few family members and close friends. As discreet as the wedding was, it is no question that Palermo, whose style has been praised internationally, made a sartorial choice worthy of making headlines.