Oded Brenner Returns to Union Square with a Cacao Shop and, of course, Chocolate 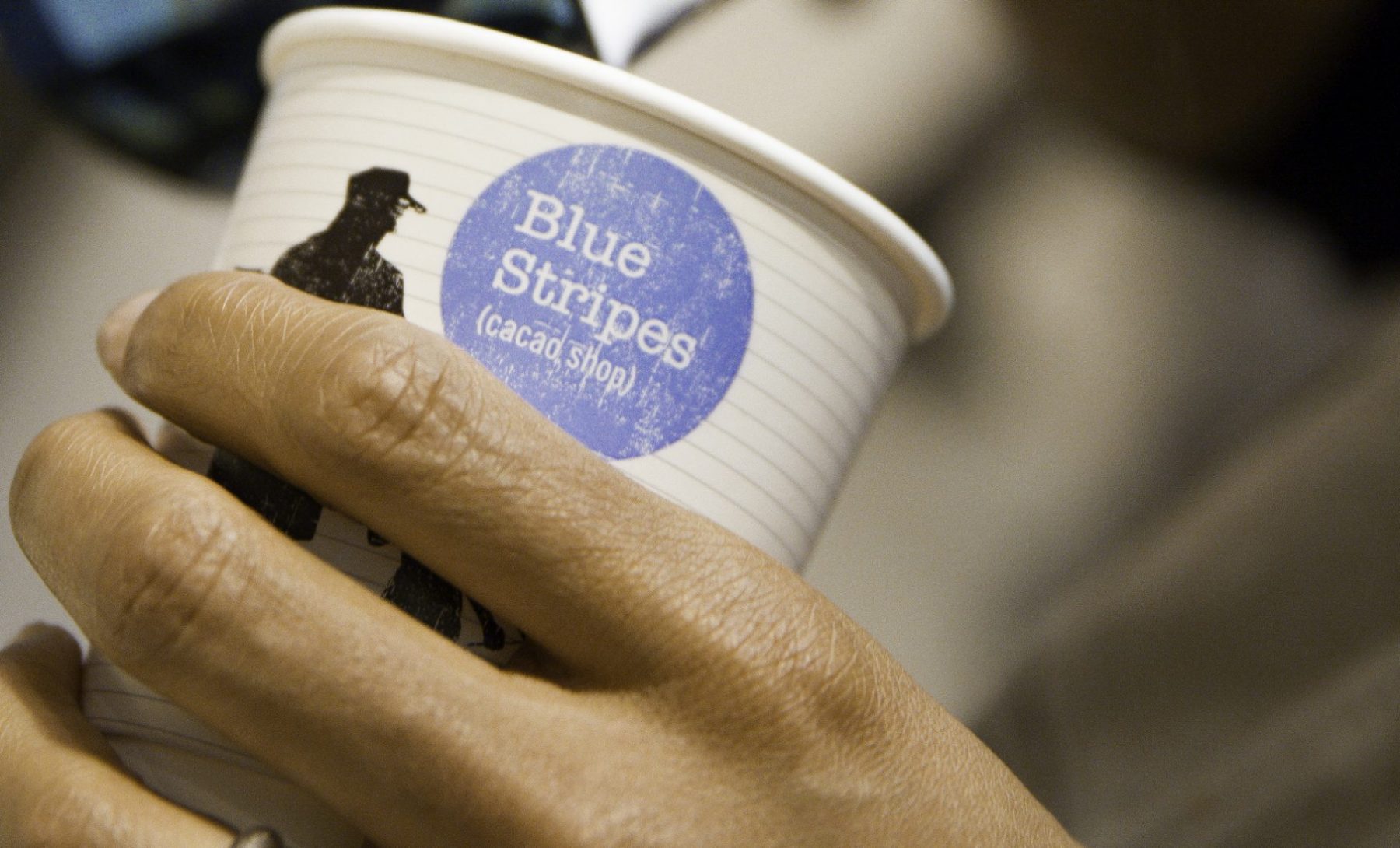 If you’ve ever visited an outpost of the chocolate wonderland that is Max Brenner, you’ll recognize Oded. He leant part of his name and his image to the venture, which he started as a small chocolate shop in Israel and eventually sold to a company that turned it into a global chain. But Oded has been out of the game for a while, as contentions litigation with his former company required him to disassociate himself from chocolate for five years.

Brenner, who resides outside the city with his two young kids, continued to fuel his passion for chocolate in that time by writing, traveling, and researching. The result is Blue Stripes Cacao Shop, an inviting cafe on 13th Street, just off University Place, minutes away from the original US location of Max Brenner.

I sat down with Oded in his bustling shop filled with students and families to talk about how his new project came to be, his history in the field, and what he sees as the future for cacao, plus to taste some cacao and hot chocolate.

Downtown: How did you pick Union Square?

Oded Brenner: It’s not that I looked for a place necessarily near Max Brenner. There were a few things I wanted. I really wanted a place that looks like this, meaning that has the industrial look, the bricks the high ceilings, all this; however, I didn’t want to be in a very remote place like Red Hook or somewhere else that would be too quiet for what I’m doing. I wanted traffic. I also wanted a side street. I didn’t want to be like in the heart of Union Square, and this place was exactly everything. It is a side street, it has traffic, I wanted a side street in a very happening area. There’s a lot of traffic the students, etcetera, but with this location, to find this look here in the area, it’s close to impossible.

Downtown: So you did a lot of research in Jamaica?

OB: Not only in Jamaica, but what I did was, there was a guy that invited me actually to see coffee in the Blue Mountains, and then when I was with him for a few days, he told me that in the past they were growing cacao in the Blue Mountains but they were not really successful with it and that it was not an amazing crop for them. When I was there he started to show me a lot of local traditions. One is sold in the market, it’s basically beans that they grind by hand and then you take it and grate it and make the purest hot chocolate.

Downtown: Do you do that here?

OB: Yes of course, it’s what we call the wild chocolate. We do it in a more New York cafe style. We have this unique grinder that I did for this and you just grind the chocolate on the spot.

Downtown: Is that where you started working with the cacao pulp, too?

OB: We saw the plantations and fruits, and he opened a cacao pod, and I said, “wow, it tastes so good.” It was just an inspiration for a whole world which is the pod and the flower and what we do with them.

Downtown: What normally happens to the pulp?

OB: Normally, they use the pulp to ferment the beans, so they do nothing with it. They ferment it for somewhere between 24 and 72 hours so most of it dries and they just wash it off. We now take it instead of it being used for fermentation.

Downtown: Do you think this could exist outside of New York or back in Israel?

OB: Yeah, no doubt, because it’s not a niche, it’s a very real thing. When people start to discover the cacao from the pod to the way we grind it, they understand that it’s an amazing product, it’s delicious, it’s healthy.

Downtown: Do you think you’re going to start a trend?

OB: I would be very surprised if not. If you look at the hours of the day, we kind of open and show all kinds of ways you can use cacao. You come to a store like this, it’s not a chocolate store. You come in the morning, you can have cacao fruit bowls in different flavors, you can have energy shakes and all these things. Then you can come for lunch and in the afternoon it’s dessert, in the winter it’s hot chocolate, summer it can be indulgent drinks like the milkshake or this healthy stuff. It really kind of opens the essence or meaning of what a cacao shop is. I don’t think anyone tastes cacao and says, “no, I don’t like it.” So, when you see a product that has this health benefit but on the other hand tastes so good, I would be surprised if it didn’t turn into like a very important thing.

Downtown: Do you think that you’re making “Instagram dishes”?

OB: Not really. First, we were doing it before Instagram was known. I obviously see the trends, I recognize it in this, but I’m not thinking of dishes and thinking let’s do something that’s crazy. I also don’t believe in it, that it’s sustainable. I don’t believe that it will stay for long. We’re trying to create an everyday consumption. We’re trying to create something that people will love and want will.

Downtown: Is your goal to open more cacao shops?

OB: Yeah, of course the idea is to open more stores like this. I’m a businessman so I want to make more of those and turn it into a substantial business, but I also really, really believe that it’s a fantastic concept. It’s aligned with where the world is going today. I love the direction of people eating more healthy, vegan, less meat, and this story is exactly there and bringing something that is fun, innovative, and new, exploring the other layers of the cacao fruit and the tree, it’s fantastic, and I would be disappointed if people don’t like it.

Downtown: So you got into all of this through a government class after you finished your military service?

OB: I didn’t have this attraction to make pastries or become a chef in any way. In Israel, there is this program where you go, you take these courses. and you get kind of allowance or something from the government. I wanted to write stories, literature, so for me it was a good arrangement where I could go to the classes, be there for a few hours, get this allowance, and go home and write. You know, life has its own plans. I picked pastry. I looked at the other courses, and it seemed to me like the easiest. I did it, and you know life is taking you to a path, which was traveling in Europe. I did the course, and then I came to like this way of life, so I started to travel in Europe, in Paris, in Germany, in Austria, and I came back to Israel and started a little small chocolate store. As a storyteller, I didn’t write but chocolate was for me a tool to express myself and kind of tell my life story and I didn’t know how far it was going to go, meaning that in the beginning there was chapter one which was Max Brenner and then the litigation and now me writing the stories for my daughter and now this, so it became a real story.