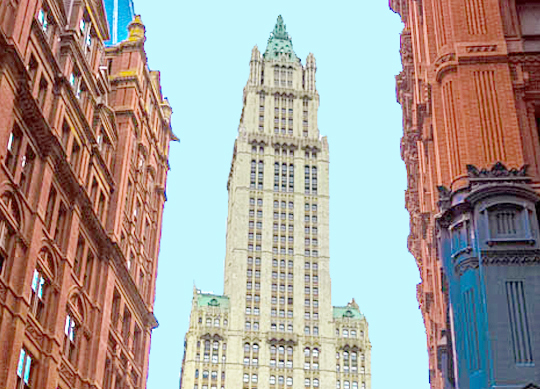 The Woolworth Building in Downtown Manhattan once held the record for the tallest building in the world, but today it is looking to break a new kind of record.

The downtown area is continuing to be the hottest spot to settle down in New York City, and the penthouse at the top of the Woolworth Building has been listed at a shattering price of $110 million. Homes in Manhattan have been listed above the $100 million dollar mark before, but have never been sold for the asking price. If it is listed for this price, it will be the highest-ever asking price for a condominium in Downtown Manhattan; and if it is sold for that price it will be the highest priced home in New York City.

The top floors of the building are being renovated into 34 luxury style apartments at a starting price of $3.5 million for a 1,209 square-foot apartment. Three other units in the building are listed at a price of more than $20 million.

What may be even more shocking than the price of the penthouse is that it will stretch across eight floors of the building. The penthouse living space will occupy the 50th and 51st floors with the penthouse continuing to the 58th floor. It will include luxuries such as a media room, wine cellar and a private observation deck.

The building was built in 1913 and was owned by the F.W. Woolworth Company, now known as the Venator Group, until it was sold to the Witkoff Group in 1998. The building is popular in pop culture and has been featured in films such as The Great Gatsby and Enchanted, making it an even more appealing place to have your home.

Alchemy Properties is developing the project and has described the home as a “castle in the sky.” Sales for the living spaces are expected to begin in the fall of this year, with moving scheduled for some time in 2016.