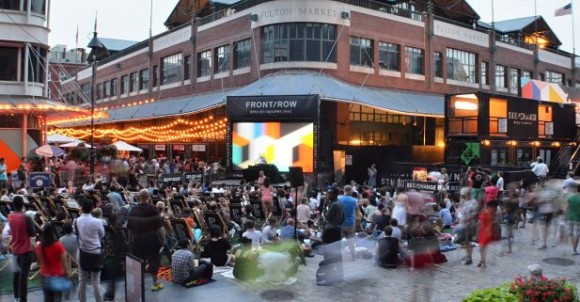 Starting in June, the South Street Seaport will be home to the Seaport Studios, a two-story pop-up designed to showcase emerging and local fashion designers, and also feature an art gallery and coffee bar.

The pop-up, a 5,000 square-foot space located at the corner of Fulton and Front streets, is a collaborative effort between the Seaport owners, the Howard Hughes Corporation, and fashion trade publication, Women’s Wear Daily. The idea behind the new Seaport Studios is to provide a unique, one-of-a-kind experience to transform and help foster the future of the fashion scene in lower Manhattan.

Designed by the Brooklyn-based company, Guild Group, the store’s interior draws inspiration from the Seaport’s maritime and trading history. The first level of the space will feature the independent brands and designers with a coffee bar that overlooks the iconic ships and stone streets of the seaport. The second level of the space will be home to the art gallery that will feature curated exhibits and ongoing programs and events that will create an inspiring place to gather, engage and relax.

The new concept store will give local designers an opportunity to showcase their distinct brand, and unite retail, New York and curated activities all under one roof. The store will feature up to five designers at one time, and will rotate its selection every couple of months.

The pop-up will run through 2015, and has the option of staying open longer. The addition of the store is yet another expansion in the downtown area, especially at the seaport, which has seen a plethora of permanent boutiques that have debuted over the past several months.