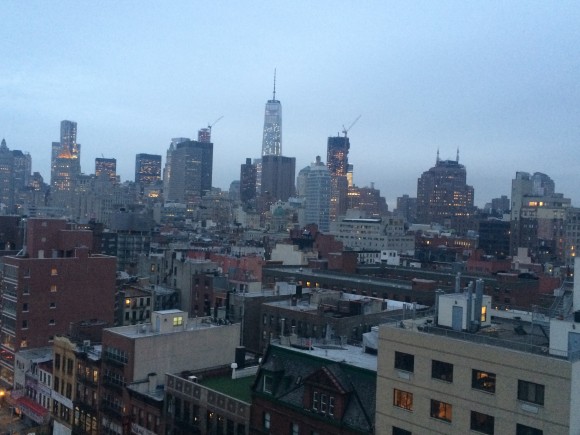 Us The Duo performing at the 2015 Triennial Members Party. Photo: Courtesy of Jackie Hart/Downtown Magazine

The 2015 Triennial: “Surround Audience” exhibit is a signature initiative of the New Museum as it is the only recurring international exhibit dedicated to early-career artists from all over the world. Over fifty-one artists’ work is currently being showcased at the museum, which runs until the end of May.

Downtown had the privilege of attending event and viewing the exhibit. The Sky Room, located on the top floor of the museum, allowed guests to take in a stunning view of lower Manhattan while enjoying signature cocktails and live music from Us The Duo. Stunning sensor-activated LED screens lined the walls, which tracked people’s movements as they moved and danced through the room.

The exhibit itself was fascinating, which explored the effects of a connected world through oneself and identity as well as on art’s form and larger social role. The artworks ranged from interactive pieces, to simple, but aesthetically pleasing paintings and sculptures.

About 800 guests were in attendance, including New Museum members and downtown tastemakers within the worlds of art, fashion, music, design, and technology.

It was an overall wonderful night filled with great music, cocktails and breathtaking art!