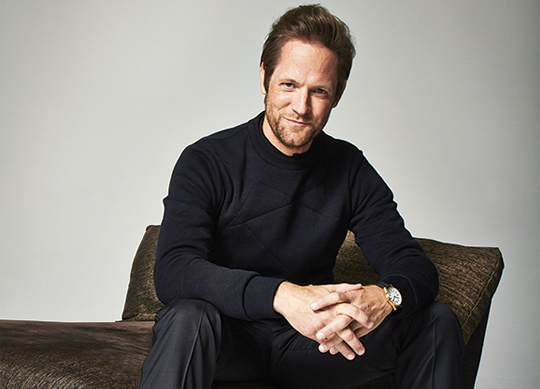 Matt Letscher of Scandal and The Carrie Diaries is a breakout star, and everybody’s favorite familiar face.

Matt Letscher is the ultimate actor. He’s the kind of guy everybody knows, but nobody seems to know his name. “I guess that means I’m doing my job,” laughs the affable actor, playwright and family man who has seen his tip-of-the-tongue status change to top-of-the-marquee since exploding onto America’s consciousness with two completely different, but equally high-profile parts, on the hit series, Scandal and the prequel to Sex and the City, The Carrie Diaries.

“The fact that they are so different made it a little easier for me to do one after the other,” says the 42-year-old father of two daughters who fell in love with the theater as a kid growing up in Grosse Pointe, Michigan.

In Scandal, he plays the scene-stealing and scheming Chief of Staff for the Vice President who would sink to any depth to rise to the top. On the opposite end of the spectrum, he stars as the awkward, but well-intentioned widowed dad of young Carrie Bradshaw, who never quite has a handle on things.

“I’ve always worked a lot, but I’ve never been a celebrity,” he laughs. “But now people approach and let me know they like my work, and it’s really not a bad feeling.”

Letscher is an actor’s actor, having racked up more than 15 film roles dating back to his 1993 debut in Ted Turner’s epic Gettysburg back in 1993. He’s also a theater mainstay, appearing in 18 plays and getting his start when Jeff Daniels, Evening News star and fellow Michigan native, discovered his talent as a playwright, encouraging him to write his own first work, Ship of Fools, which Daniels featured in his Purple Rose Theatre.

If you would like to continue reading the entire story written by Mike Hammer and see all the photographs of Matt Letscher by Halley Ballard, click here.