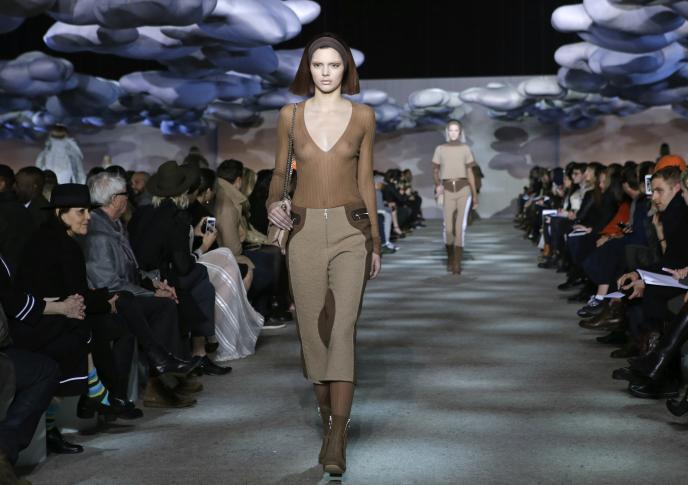 Four hundred soft clouds were hung from the rafters of the Lexington Armory in Gramercy to create the mood, while the voice of actress Jessica Lange was piped through the room repeating the lyrics to the song that marked the end of the dark days of the Depression, “Happy Days Are Here Again,” over and over again.

Jacobs told The Guardian he wanted the voice-over to sound “like a mantra – the kind of thing you might hear at a spa.” Members of the audience reported that it was strange, futuristic, and somehow soothing. Jacobs added that he selected the voice of the actress because he was inspired by women like her and Meryl Streep.

Last night’s show was highly anticipated since it was Jacobs’ first since he left his post at Louis Vuitton to focus on his own brand. Because the models walked a lengthy runway that wrapped around the room, everyone had a front-row seat.

Monochromatic looks and matching separates dominated in white, camel, and pastels, and were followed by evening looks in tiered organza and sequins. The models, including 18-year-old Kardashian, half-sibling Kendall Jenner (who controversially showed her breasts) in her first runway show, wore short wigs in shades of pink and sported bleached eyebrows.

Jacobs has made a few changes since leaving Louis Vuitton. He is preparing his company for an initial public offering (IPO), opening a new flagship store in New York, and finding a new name for the Marc by Marc Jacobs brand. In addition, Jacobs has signed on a new photographer, David Sims, after working 16-years years with Juergen Teller. Teller refused to shoot Miley Cyrus for his Spring 2014 ad campaign and the two parted ways. Jacobs told W,  “I guess a lot of people had problems with [Miley’s] behavior or something—because they’re all so pure and chaste, right?”

After last night’s show, we’re excited to see what Jacobs will do with his new found freedom.