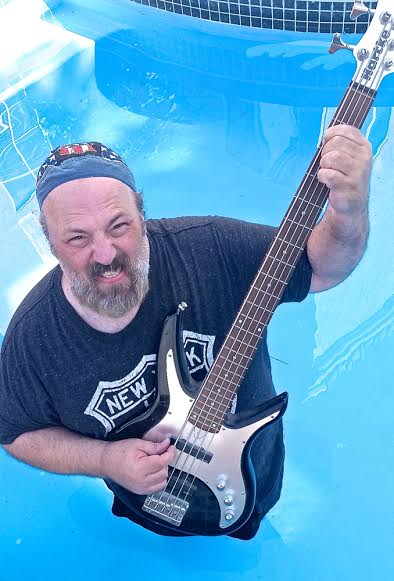 30 years since their formation – yes, 1985 was 30 years ago – Magellan is still making music. Although they could originally be pigeonholed as a “prog rock band,” Magellan has evolved in recent years. Magellan leader Trent Gardner, who Downtown owner and publisher Grace Capobianco introduced me to, shared with me the group’s powerful and controversial new music video, “War Drum (This Ain’t America).”

But there’s plenty more to Trent’s story than the fact that Magellan just put out a new single digitally. More interesting — to me, at least — is that he has evolved with the times and moved forward with exciting projects and new technologies. On the musical end, there was Explorers Club, a “supergroup” led by Trent and his brother Wayne, which also included members of Yes, Dream Theater, Mr. Big, Kansas and Testament on their two albums. There’s also been plenty of work related to the band Chicago.

Within our Q&A, my personal highlight was Trent’s response to my request for “last words for the kids.” The words clearly come from a person who’s seen a lot personally and professionally. Which is why his commentary from “War Drum (This Ain’t America)” should not be taken lightly by anyone, no matter their background or political ideology.

For someone who hasn’t heard Magellan before, how would you describe your band?

Trent Gardner: Magellan is an “open musical experiment.” Although we started out on a progressive rock label, many of our fans know that we’ve been trying to strike a balance between high-energy, complex compositions – that tend to narrow cast to a specific audience — and songs that are more easily digested. Fans of Yes, ELP, and Kansas sometimes come to mind, though many fans of the band know that our albums have been driven by “opportunity” as much as interest in the “prog” genre. Survival is a strong motivator, so if they would pay me to do jazz or classical, I could have gone there just as easily!

For me, starting with a bonafide label helped me create a platform to help produce other artists and learn from masters of the trade — artists such as Steve Walsh, Ian Anderson, and many others. I’ve been on both sides of mentoring too, as I believe it’s a powerful path for musical growth. In a nutshell, Magellan is an evolving rock band that is just now coming into its own with shorter, more crafted songs over the last couple of years.

A lot of people shy away from the “prog” term, feeling that it implies a lack of hooks and an emphasis on long-winded songs. How do you feel when people mention “prog” as they describe Magellan?

T: Normally I avoid the term as it’s automatically synonymous with GUARANTEED marketing failure, in most cases. Just hearing the term sort of sends a chill down my spine. I had to raise a family based upon that marketing vernacular – used by “prog” labels — and the income it generated for me back in the day. Those lessons opened my eyes to many realities, though I am forever grateful to the Japanese and European markets that embraced our first couple of albums. I’ve always thought the most accessible bits from some of the various bands in the genre could be edited down and promoted differently, allowing a wider audience a chance of discovery.

Your new video for “War Drum (This Ain’t America”)” emphasizes the need for certain U.S. Presidential candidates to step down, but more importantly that things in the U.S. need to change. Is there anything that you feel is going well in the U.S. politically or socially?

T: I would say that the general empowerment of women in business and in politics is very exciting, though the glass ceiling in many respects, is far from being gone. There are a ton of examples – amazing progress on this subject, but there is also plenty of lip service and “business as usual” that remains.

Fundamentally, we have a long way to go in terms of improving both fairness and respect across the board. I would love to see a woman elected President [of the United States]. I have no specific candidate in mind, it’s just the idea that we should try something new, with a fresh and obviously qualified approach — and that would certainly shake things up. I think it’s one of the best things that could happen to the country right now.

Is there a country that you feel the U.S. could learn more from in terms of how the government is run?

T: Without our current dysfunction, it’s hard to believe we could do anything but repeat more of the same. I believe we should consider looking at how other countries educate their youth, especially Finland. For example, the Finnish don’t outsource everything like we do here. “For-profit or not-for profit”…too complex in the USA. In Finland, they make teaching a very appealing career path and they promote from within. If the United States would dig deeper into revamping our eduction system after their model, we could see a quantum shift in the thinking and attitudes of next generation U.S. leaders. We need that desperately and that could make a real difference here.

No real segue here, but I figured I’d ask anyway: How did you first wind up working with Robert Lamm and Chicago?

T: As a teenager growing up, I was introduced to Chicago one summer after my father passed away. It was sort of my own Mr. Holland’s Opus-type story. This teacher named Rick Luther, in three months showed me HOW Chicago’s songs really worked. I learned trombone and how to play “Just You ‘N’ Me” from Chicago VI. I was hooked. Before the school year started, my mom bought me every score that broke down all the individual parts. Chicago WAS my music eduction. Anyway, much later, around 2006, I exchanged a few musical ideas via MySpace with Robert. We hit it off and I discovered that he was ALREADY aware of Magellan. Wow!

We became songwriting partners and my first gig with him was to collaborate on two songs from his solo album, Living Proof. The song “Out Of The Blue” is a tribute to the late great Terry Kath, Chicago’s original guitarist and life blood of their rock and roll roots. Things went so well, that Robert introduced me to the rest of Chicago and before I knew it, I was given the opportunity to arrange horns on four of the tracks from Chicago’s most recent album, XXXVI: Now. Talk about coming full circle. Of all my collaborations, this one meant the most to me as it was the fulfillment of a life-long dream to work with the band on some level.

Magellan has also collaborated over the years with Dream Theater’s John Petrucci and James LaBrie, Yes’ Steve Howe, Jethro Tull’s Ian Anderson and Missing Persons’ Terry Bozzio, to name a few key players. How do collaborations like these usually happen?

T: I began doing side projects because I was writing so much material that the label would say, “we can’t release another Magellan album now, it’s only been three weeks since the last one!” So I began doing side projects such as a rock opera called Leonardo The Absolute Man, based on the life of Leonardo DaVinci, and Explorers Club, which included a who’s who of progressive rock royalty. I had found my niche. I could write with and FOR other musicians. That was one great part about being on a label. They could reach out and introduce me to other artists in a way I could never do alone. I am truly grateful for that.

What’s ahead for Magellan in the near-future? A New York City gig, perhaps?

T: My most immediate concern is running with my renewed sense of energy for improving as a songwriter. I expect Magellan – with special guests — to eventually film a live performance in New York City. It is an alternative to regular touring, which without a hit is very hard to make happen. I would like to offer our live recording on Blu-Ray etc. I am sure it will be a small venue, but “Magellan LIVE in New York City” has a really nice ring to it.

When you’re not busy with Magellan, how do you like to spend your time?

T: I spend nearly all my time working with other music and technology clients in the music space. I have been very blessed that my clients actually ENCOURAGE me to stay active musically. I guess you could say I’m a one-trick pony and I am focused simply trying to improve my one trick with whatever free time I find.

Finally, Trent, any last words for the kids?

T: Absolutely, and this really isn’t related to music. It’s about life. Whoever you are or want to be, just be confident and ignore what anyone has to say about you, even when it hurts. Don’t compare yourself with anyone, just be a better version of yourself everyday. After that, all is possible. No age limit.