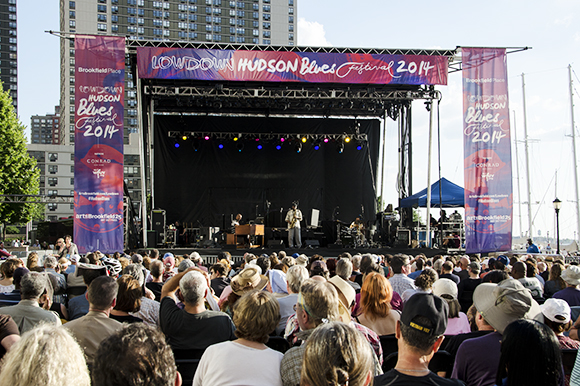 Festival attendees admire the waterfront views while listening to their favorite blues artists.

Downtown Manhattan’s got the blues…or at least it did last week during Arts Brookfield’s fourth annual Lower Manhattan Blues Festival. The two-night affair attracted blues fans from all over the Tri-state area, and featured bands and artists like Sharon Jones & The Dap-Kings, The Robert Cray Band, and John Hiatt. DOWNTOWN had the opportunity to attend the event held at Brookfield Place, a beautiful waterfront plaza peppered with restaurants, bars, and skyline views.

The setup of the festival was basic; rows of chairs sat at the edge of the plaza facing the stage, and guests had the opportunity to sit up close for the show, or enjoy the outdoor concert from afar. The stage was equipped with microphones, a blue drum set, and an arsenal of electric guitars. In between acts, guests could glance across the water for a distant view of the Statue of Liberty.

The Robert Cray Band was a crowd favorite.

A festival favorite was The Robert Cray Band, who took the stage at approximately 8 p.m. on the second night of the event. Cray’s soulful vocal performance was perfectly paired with the band’s classic, rhythmic bass progressions. The set list showcased some of the group’s best tunes blending originality with familiar blues melodies. Robert Cray contorted his face with emotion as he bellowed passionate lyrics telling stories of heartbreak and betrayal. “She’s gonna lose the man who really loves her,” he sang. “And it’s all because of me.” Donning denim and drinking from red plastic cups, it was clear that the band was performing purely for the music, rather than for recognition or stardom. The group finished their set just as the sun began to set, shining hints of orange and pink highlights on the sailboats floating behind the stage.

Overall, the event was a hit. It was clear the music was enjoyed, not only by the audience members, but also by the musicians. The Blues Festival is just another one of the countless cultural perks Downtown Manhattan has to offer. We’re counting down the days until the Blues Festival returns next year.

James Carter woos the crowd with his soulful saxophone solo