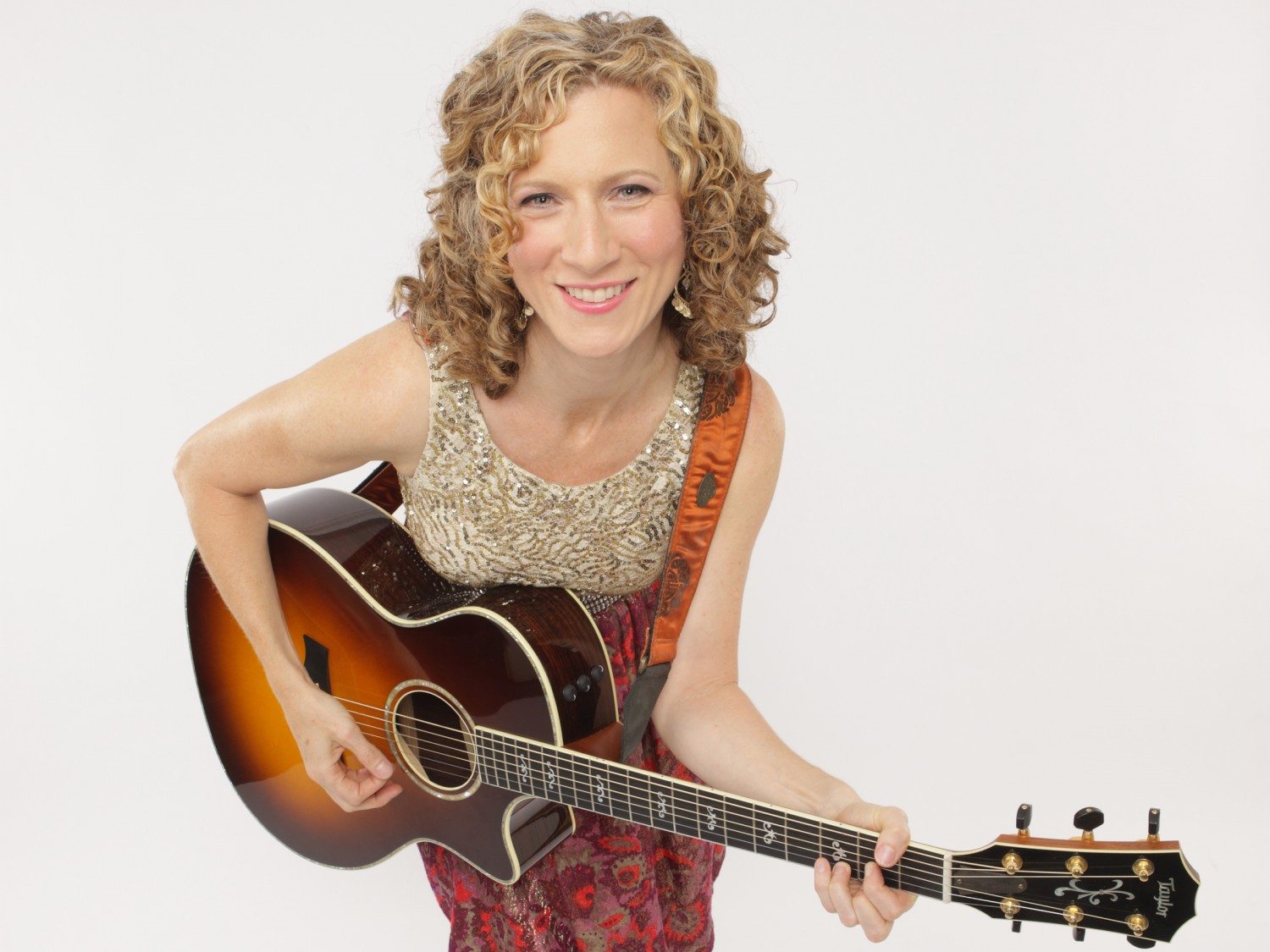 Kids (and parents), our favorite singer Laurie Berkner will be performing on the Circle Line sailing along the Hudson River and singing along to her greatest hit songs on Saturday, Jun. 25.

Laurie’s music evokes an authentic, fun but yet teaches responsibility in a soft way to a child’s life. A song like “My Family” explains how a household consists of anyone giving unconditional love to a child –- shepherding away from your “neutral” household of mother and father -– making a mixed household more accepted in our society. These are the lyrics children need to hear, which will in turn help build tolerance when a child only has a grandma or an aunt raising them.

As for teaching those kiddies responsibility, what better song does that then “One Seed?” “One seed, two hands, dig a hole, start to plant / Watch it grow, pass it down, one Earth spins around.” These are such simple lyrics about protecting and nurturing our beautiful planet, and children connect to this simplicity.

Below is a one-on-one interview with Laurie, which includes information on her new album for our kids to continue the love of music with. Join us June 25th on the Circle Line at 11:00 AM, as leaving from Pier 83; this is located at West 42nd Street and the Hudson River, adjacent to Pier 81, North River Landing. Tickets start at $39, with a limited number of $99 VIP tickets still available. I, for one, can’t wait to take my daughter Julia and for us to have a day filled with Laurie Berkner’s tunes with the Manhattan skyline as our backdrop.

Are the lyrics all your lyrics?

How do the words come to you when writing a song for children that vary in age from about two to seven years old?

LB: Often I think about what I would have wanted to sing about when I was that age, or I listen to what I hear kids saying and turn those words into song lyrics.

Nick Jr. and Jack’s Big Music Show gave you such a platform for all kids to fall in love with your music and you…how was it for you before this opportunity?

LB: It actually wasn’t so different in content, but the scale was very different. I had a small but fantastically-loyal and excited fan base before being on Nick Jr — some from being known locally and some from having performed on The Today Show — and then I had a large, but fantastically-loyal and excited fanbase afterwards. Before Nick Jr., I played smaller gigs and sold many fewer albums and got recognized on the street less often.

Will you be writing another picture book?

LB: I recently signed with Simon & Schuster to develop three picture books. The text is the lyrics to each of the songs we’ve chosen to base the books on. The first one is We Are the Dinosaurs, and it is coming out in March, 2017. I can’t wait!

Is it equally as enjoyable to write books as is to write music?

LB: It’s definitely enjoyable, but also very different for me. For the books I’m working on now, the words are my lyrics. That means that before we even start creating the book, the writing is done. Instead, I get to work on ways to add a story to those lyrics that will manifest itself in the illustrations. I also work with my editor on dialogue for the characters, the direction the illustrations will take, and what the look of the book will be overall. It’s extremely cool to watch the songs I write expand into a visual world that I couldn’t even imagine before.

The song “My Family” is one of my favorites, and my daughter’s favorite as well…When she was three years old, she was understanding the dynamics of her family being from a single family household, and the song “My Family” in her mind meant it doesn’t matter if her family is just her mom. The words transcend to a family just consisting of child and grandma, child and aunt, etc. It makes it okay in their life for it not to be the traditional neutral household of mother and father. Is this where you were achieving in the song?

LB: I was asked by Nick Jr. to write a song about family, and I decided the only way it feel good to sing it would be if it represented the reality of what I think family actually is. There are so many different kinds of people in our lives who nurture us, love us, raise us and give to us unconditionally. I wanted to write a song that celebrated and reflected that, especially because I personally have a strong feeling of family with many different kinds of people in my life, many of whom are not related to me by blood. I’m so glad to hear that it felt like it was representative of your family, too!

Your videos are so creative, colorful…Do you work with a set designer, stage designer that works through the concept or is this all you and your band?

LB: Thank you! The early videos were done by different production companies who came up with a lot of the ideas and then hired prop people and set designers to manifest them.

My more recent videos — that I have been filming at the YouTube Creator Space and posting on our LaurieBerknerBand channel — are all designed by the wonderful ladies who run my Two Tomatoes Records office in New York City, with some input from me.

How did the word Mahalo come to you?  It’s a very easy word to say for children and it flows so beautiful.

LB: It is, isn’t it? It was really my husband, Brian, who inspired me. We were in Hawaii on our honeymoon and had brought ukuleles. Every time I turned around he was strumming his and singing “Mahalo, mahalo, mahalo,” because everyone said it to us so often. At one point while we were there, I ended up in the emergency room after I stepped on a sea urchin. While I was there I had to wait two hours for someone to see me. I really wanted to find something positive in the experience so I would have good memories of my honeymoon — even in the hospital! — so I decided to write a whole song around the word “mahalo,” starting with being thankful that I had the time and inspiration to write a song.

You also have someone speaking in sign language in your video. Was this more of a request from parents of children who have a hearing disability?

LB: Not at all. It was just happenstance that one of the people in my office had a roommate who could sign, and offered to come in and do it for us. I thought it was an awesome idea, so we did it!

Your songs teach responsibility as well “seed” about keeping the ocean clean. It comes down to basics with kids and kids can naturally be nurturing. Do you find the kids connecting to this and acting upon it?

LB: I don’t really know. I hear a lot of stories of kids liking the song and wanting to sing it, and also about it being used in classrooms to teach that kind of responsibility and connection to our planet. I certainly hope they are connecting to it!

What is the most requested song from your fans? How about their parents?

LB: Some of the biggest kid favorites are “We Are The Dinosaurs,” “Victor Vito,” “Rocketship Run,” and “I’m Gonna Catch You.” Parents tend more toward songs like “Under A Shady Tree” and “My Family.”

You have a section on your website about sustainable food and you mention how much Monsanto controls the seed company.  Is Non-GMO something you practice in your household?

LB: Yes, definitely. I try to never buy foods that I think could have been genetically-modified and do most of my shopping either at places where I can buy organic, or at the local greenmarket where I can talk directly to the farmers about how they grow their food.

Do you read labels to everything you buy?

What makes the Circle Line different for a children’s performance?

LB: It will certainly be different for me. I don’t think I’ve ever performed on a moving boat before! I also hope it will be fun for the families who come to sing and dance to be able look out at the Hudson River, New York City and amazing landmarks like The Statue of Liberty.

What’s next for Laurie? You have a new album coming up? What will it highlight for children?

LB: I do! It’s called Superhero, and it’s 21 brand new songs about things from bubbles to fireworks to pajamas.