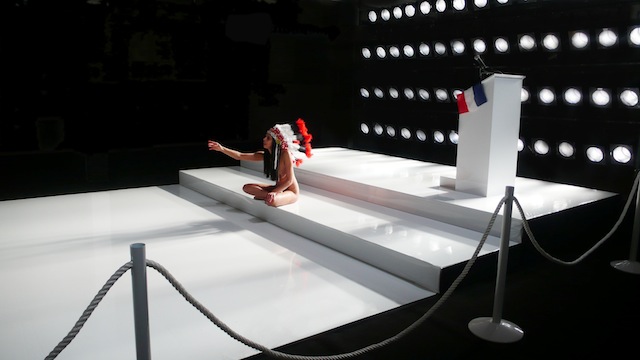 Internationally renowned dance artist Latifa Laâbissi dazzled a New York audience recently with aperformance of Self Portrait Camouflage held at Chez Bushwich and presented by the Cultural Services of the French Embassy in the United States.

Latifa Laâbissi’s astonishing performance offered a unique perspective on the issue of identity and cultural belonging. The artist is originally from North Africa, and her performance put a spotlight on several current controversial issues in France including immigration, integration, colonialism and the social integration of women.

“This solo was created prior to the French presidential election of 2007,” says Latifa Laâbissi. “It had a highly political tone, and its statement remains strong todays. It’s about how we see the “other,” the “stranger,” “the outsider,”and turn that into a political argument, subjecting minorities to their status of foreigners.”

Latifa Laâbissi studied at the famed Cunningham Studio in New York, but began her career as a dancer and choreographer in France. She collaborated with innovative dancers and choreographers including, Jean-Claude Gallotta, Thierry Baë, Georges Appaix, Loïc Touzé, Jennifer Lacey and Nadia Lauro, and Boris Charmatz.

For a schedule of upcoming events promoted by the French Embassy, please visit: frenchculture.org/front