Interview: Larry Silverstein, A Man With A View 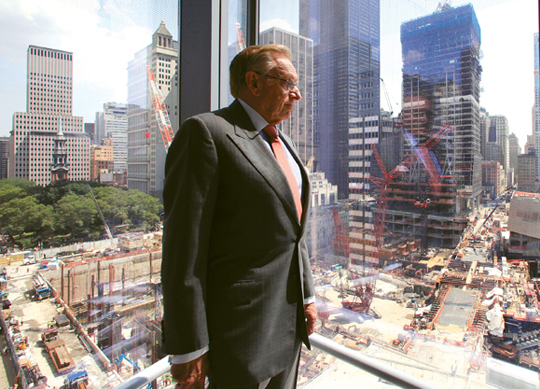 There he is, Larry Silverstein, the man famed for rebuilding the World Trade Center and one of the most powerful individuals in this city. He is crouched at his desk, pounding on a computer and im­peccably dressed in a multi-striped blue and red shirt and a perfectly matched tie.

He is Mr. Big Picture, thinking three projects down the road and answering questions I haven’t yet posed. The mercurial developer’s Silverstein Proper­ties is also driving construction of several new buildings on the site, including towers 2, 3 and 4 of the new Trade Center. The 72-floor 4 World Trade Center recently opened to critical acclaim, and the others are planned to be even bigger.

Silverstein believes that the mixed use of the properties on the World Trade Center site, along with its many amenities, including a transit hub connecting more than a dozen subway lines and trains from New Jersey, will make it more vibrant than it has ever been before.

We had the opportunity to sit down with this architectural icon to hear his thoughts about how he built his empire and to listen to him share his grand vision for the future, as he peered out at his great accomplishments from his office window overlooking Lower Manhattan.

What does the World Trade Center symbol­ize to you? The 16-acre site is the most major, and certainly complex, public-private partner­ship that could have been devised. It’s taken us 12 years to get to today, and we should be done by 2018. It’s been a long haul.

What goes through your mind when you over­look the Trade Center site? I think of the enor­mity of the travail, the challenges, the diversity of opinion, the joy of dealing with six governors of the states of New York and New Jersey. There has been one mayor, five or six chairmen of the Port Authority, five or six executive directors of the Port Authority involved in the process. It exacted a whole range of people saying ‘Stop, I want to look, I want to understand, I want to be sure we’re doing the right thing.’ It caused an enor­mous amount of delay.

Are you surprised by these delays? I expected it to go much faster. I was totally naïve.

If you would like to continue reading the entire interview with Larry Silverstein, you can find DOWNTOWN’s Spring 2014 issue on newsstands.