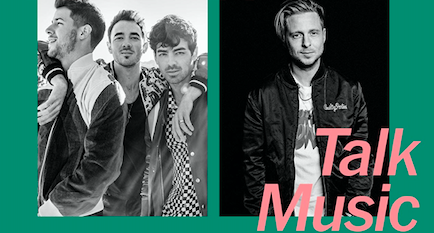 Excitement is in the air with the return of the hit pop group the Jonas Brothers alongside OneRepublic’s Ryan Tedder.

On June 13th, The New York Times live conversation and performance series will be hosting a conversation between multi-platinum selling band the Jonas Brothers and Ryan Tedder, the Grammy award-winning singer, producer and songwriter.

Tedder wrote the hit song “Sucker” with Nick, Joe, and Kevin Jonas. It was the group’s first song together as the Jonas Brothers in six years. Together the group will discuss their chance meeting, creative collaboration, and musical development over the last decade, in addition to the Jonas Brothers’ exciting reunion.

This TimesTalks event will take place on June 13th at BMCC Tribeca Performing Arts Center and will be live streamed on TimesTalks.com and the TimesTalks YouTube channel starting at 8PM EST. Select media passes are available. Tickets are available at this link. This is a conversation that you will not want to miss!