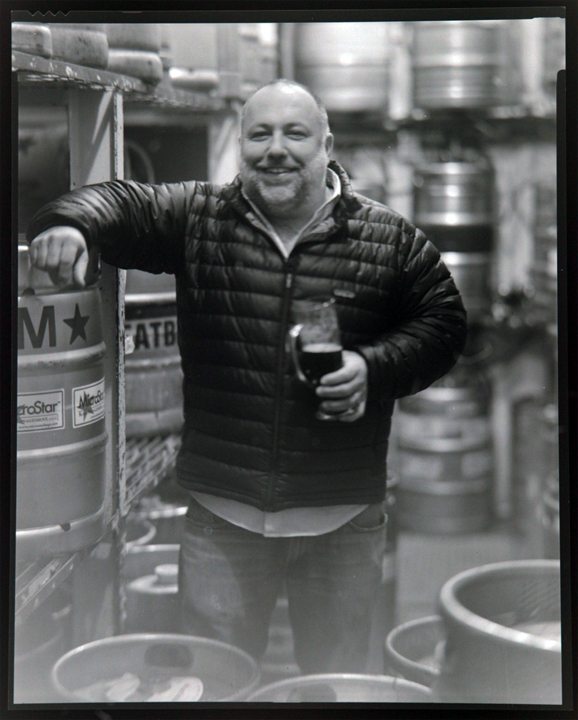 Jimmy Carbone is one of those people that makes you question what you are doing with your life. The number of projects and businesses he has going at any given time is astounding, and most of them revolve around things that the majority of people look to for fun. All while being a father.

Beyond owning Jimmy’s No. 43, an East Village bar and restaurant with a focus on unique beers and a greenmarket menu, he regularly puts on festivals around the New York area as founder of Food Karma Projects. In 2009, Jimmy helped launch The Good Beer Seal, which exists to identify bars offering an intriguing selection of craft beer in a unique atmosphere; this led to an official proclamation from the NYC Mayor’s office that named July as the “July Good Beer Month.” Additionally, Jimmy is the host of the popular podcast, Beer Sessions Radio on the Heritage Radio Network, which recently aired its 250th episode.

One of said festivals is the Craft Beer Jam, which launches tomorrow, Jul. 13. The theme of the first event, which starts at 7:00 PM, is New York Vs. New Jersey Brew Battle. The following Wednesday will be Brewing Like It’s 1776. The third and final event of the series, on Jul. 27, will be The ‘New Primitives’ Of The Hudson Valley. All events will take place at The Greene Space at WNYC and WQXR, as located at 44 Charlton Street. Tickets to each one is $25, as including tastings and snacks, while those looking to attendee all three Wednesdays can buy a discounted pass for $60.

For more information on the Craft Beer Jam, click on over to www.thegreenespace.org/series/craft-beer-jam-2016. Jimmy himself can be followed on Twitter via @JimmyPotsandPan.

Where did the idea for the Craft Beer Jam come from?

Jimmy Carbone: I had co-created Lopate and Locavores — another live panel/tasting event in The Greene Space at WNYC featuring Leonard Lopate — and had also been hosting Beer Sessions Radio, my own beer podcast on Heritage Radio Network since 2010. So I definitely felt the next step was a live beer and food tasting panel. Craft Beer Jam was an outgrowth of that.

To someone thinking of attending, how would you describe the event?

JC: Craft Beer Jam at The Greene Space celebrates top brewers. We’ll be talking with them about beer on-stage while the audience participates in tastings alongside them. Think of it as witty talk, lively conversation, and good beer.

How did you first get into craft beers?

JC: In 1992, I was interested in wine, took a sommelier course, and became a wine/beer buyer. I later met Brooklyn Brewery’s craft brewers guild reps who were selling craft beers from USA and Europe. My interest grew over the years and in 2005 I opened Jimmys No. 43, a craft beer focused restaurant/pub that got me more involved in the craft beer scene.

What does it take to get the Good Beer Seal?

JC: In 2009, several pioneer craft beer bar owners in New York City got together to recognize small, independently-owned craft beer bars. A writer’s committee meets each year to pick new awardees of the good beer seal. Currently beer bars in New York City, Long Island, and parts of New Jersey are eligible, but it may expand. Another outgrowth of the good beer seal was July Good Beer Month, which is a reason we host the Craft Beer Jam in July.

Do you have a favorite craft beer?

JC: It’s always changing because there are so many new good breweries. Classics include Saison Dupont from Belgium and Hitachino White Ale from Japan. For American craft beers, Barrier Money IPA from Long Island and Other Half IPA from Brooklyn.

Other than Jimmy’s No. 43, do you have a favorite bar in Manhattan?

JC: The Good Beer Seal recognizes many of my favorites. Spuyten Duyvil and Mugs Alehouse in Williamsburg, Brooklyn are a few, as well as ABC Beer Co. on Ave C in the East Village.

What else is coming up for you besides the Craft Beer Jam? More from Food Karma Projects?

JC: I’m lucky. My work is my free time and radio is my passion. Running a bar/restaurant/pub and hosting special events allows me to meet a lot of people, and learn about the latest trends in food, craft beer, etc. I like taking photos of events for my Facebook page, and some get published in local beer magazines. I’m also a dad and help organize school fundraisers. I also love reading and baseball.

Finally, Jimmy, any last words for the kids?

JC: Come out to Craft Beer Jam. Taste, talk, and drink with the brewers.