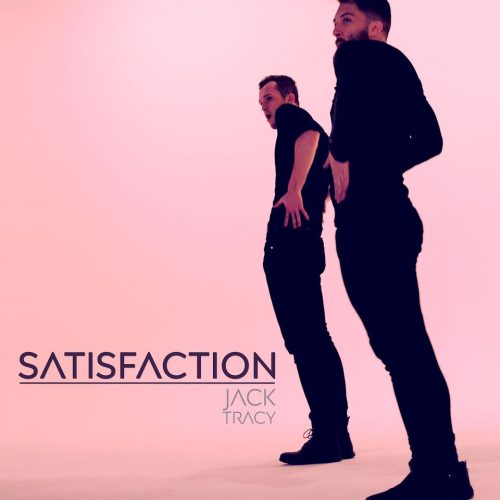 At 35 years old, Jack Tracy may be late to the superstar pop game, but in “Satisfaction,” the first single from his new album appropriately titled Older, he proves he can keep step with the ‘youngins’.  “I was a musical theater major in college because, of course I was,” he explains from his home in New York.  “I got spooked into thinking I wasn’t talented enough because I never quite fit in with the thespian crowd, so I made a course correction into a more academic field.”   He became a corporate lawyer in New York, working 80-hour weeks, making lots of money, living in a swank Upper West side Apartment with his partner, and for all intents and purposes, appearing to live the NYC dream.  But at 31, he realized he was not fulfilled and that he couldn’t live the rest of his life that way.  So he took everything he learned — business acumen, creative writing, ingenuity — and threw them all into his passion for film and music.

“So here I am;  better late than never,” he reflects, acknowledging it’s all worked out for the best.   “I wouldn’t be as focused and driven as I am now had I done this earlier in my life.  I probably would have listened to all the voices telling me ‘no, you can’t do this.’  Today, I’m grown up enough to say,  ‘I hear you, but I’m going to do it anyway.’ I get to be myself, say what I want to say and do what I want to do and see if anyone digs it.”

His debut album, Older, is 90s pop inspired, featuring heavy dance records, soulful ballads and quiet storm bedroom jams.  The through-line is bass… lots of bass. “The album is not focused on hits or singles, though I think each individual song stands on its own,” he says.  “Older is meant to be listened to from track 1 to track 13, in that sequence.  It’s an audio show and hopefully someday a stage show.”

“Satisfaction,” the first single from the album, is out now.  As he did with every song on the album, Jack wrote, produced and orchestrated the dance-centric, synth-heavy track with sassy-as-hell lyrics, all by himself.  “I made every musical element on this album,” Jack explains.  “Every drum line, clap, synth chord… I wrote every melody and harmony, choreographed every dance and edited every video.”

He confirms that “Satisfaction” was written with a particular person in mind, but believes its message is a universal one that applies to all “bottom feeders who siphon energy from others through continued conflict.  I fully subscribe to the adage of: ‘when people show you who they are, believe them.’  And if you show me you’re an asshole, I’m done listening to you,” he says.

Releasing with the single and the pre-sale launch for Older is a Janet Jackson-inspired music video.  Oh yes, Jack Tracy is #Jtribe forever; a proud member of the JanFam.  A true Janatic.

Growing up, he spent a large part of his life learning Janet Jackson dance routines, because of course he did.  He would record them from VH1 on a VHS tape, replay them in his parents’ bedroom where he could point the TV into a mirror (so the dancers were facing the right way) and learn every step.   “Miss Jackson is everything.  In fact, the entire Older album is constructed from her blueprint because no one can touch Control through All For You.  That’s my formula.  Madonna queens: fight me.”

Astute listeners will also catch Aaliyah, Timberland and classic Missy Elliot influences in Older, as well as some references to Prince.   All the while, Jack Tracy pays special attention to make sure the music is true to who he is.  There is no ambiguity in what gender he is speaking to in his love songs.  The album is foremost for the LGBT community, a “by us, for us” project.

In addition to his singing and law careers, Jack Tracy is the founder and owner of Necessary Outlet, a film production company that produces LGBT web series. These series include hits like “History,” — a show which stars Tracy as a 30-something gay lawyer, fresh out of a break up and looking to rebuild his life, and “Big Law,” a comedic “The Office” type of show which Tracy makes occasional cameos in.

“My goal with all of my projects is to present stories from an LGBT point of view.  I explore topics  the Hollywood machine would never let me touch:  things like the community’s capacity for acceptance as well as intolerance.  Our being bullied and being bullies.  Our sexuality, vanity, vulnerability and judgment.   I present everything, warts and all.  Mainstream won’t serve us that; if they’re going to do a gay project, we’ll always be the heroes.  Hollywood only serves us when it is profitable to serve us, and in a way that is first and foremost driven by what they think we will buy.  I have more interest in truth, the beautiful and ugly kinds.”

In Older, Jack Tracy tackles topics facing 30-something gay men:  from fighting in the Trump resistance to the community’s obsession with youth.  He sings about fetishes and hookups for validation, however avoids songs about late nights out at the club, money, or how tonight is the last night. Older is grown folks’ music.

“I want people to hear Older and think, ‘wow, this is saying some real stuff’.  I want listeners to connect with the point of view—to say ‘oh I’ve been there’ or ‘I’ve definitely felt that’—while dancing along with me.  Genuine connection through shared experiences, thoughts and values.  Because that connection is the best part of my refocused life—that’s the fulfillment I wasn’t getting before.  That’s what’s truly important to me now.”