In Honor Of World Wi-Fi Day, The Downtown Alliance Has Expanded Its Free Wi-Fi Network 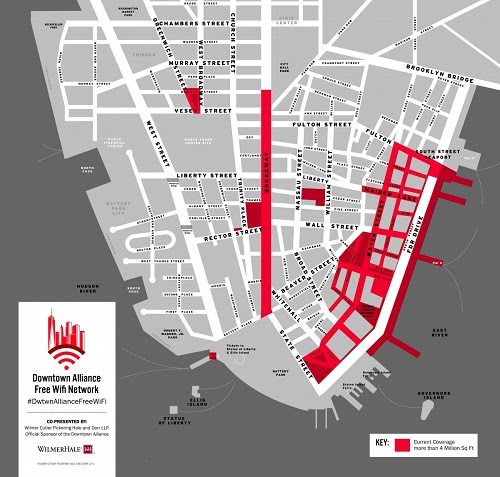 Today, June 20, marks World Wi-Fi Day, and in celebration of the occasion, the Downtown Alliance has unveiled the latest expansion of its free wi-fi network. This expansion completes coverage across the Broadway corridor, with a full coverage area now exceeding 4.5 million square feet. Free wi-fi access can be picked up via the network #DwtwnAllianceFreeWiFi.

“When we launched our free wi-fi network in 2003, it was the most extensive program of its kind,” said Jessica Lappin, President of the Downtown Alliance. “Today, our coverage has grown immensely and the program continues to illustrate what is possible in New York City and for other cities around the world. We feel that open access to the internet, and the information it unlocks, is paramount and we’re proud to be on the cutting edge to provide it across our neighborhood.”

Use of Lower Manhattan’s wi-fi service has grown steadily since it was first initiated in 2003. In 2010, 100,000 devices had connected to the network. This grew to 235,000 devices in 2012 and well over 500,000 devices last year. So far in 2016, usage of the network has grown 25 percent over the same time period last year, with the brand new Broadway Corridor already accounting for approximately 40 percent of all connections on the network.

This expansion was made possible in large part thanks to the Downtown Alliance’s partnership with Wilmer Cutler Pickering Hale and Dorr LLP (WilmerHale), a leading international law firm with a New York office in Lower Manhattan. In 2012, WilmerHale became an official sponsor of the Downtown Alliance and a co-presenting sponsor of the Alliance’s free wi-fi network. It was the first major law firm to move from Midtown to Lower Manhattan following 9/11.

“We are proud to be a continued sponsor and supporter of the Downtown Alliance’s free wi-fi network,” said Charles Platt, partner-in-charge of WilmerHale’s New York office. “Free internet access is just one of the many forward thinking programs found in our neighborhood that are enticing companies, residents and visitors to come to Lower Manhattan every year.”

More information on this program and the wi-fi itself can be found at: http://www.downtownny.com/programs/free-public-wifi.