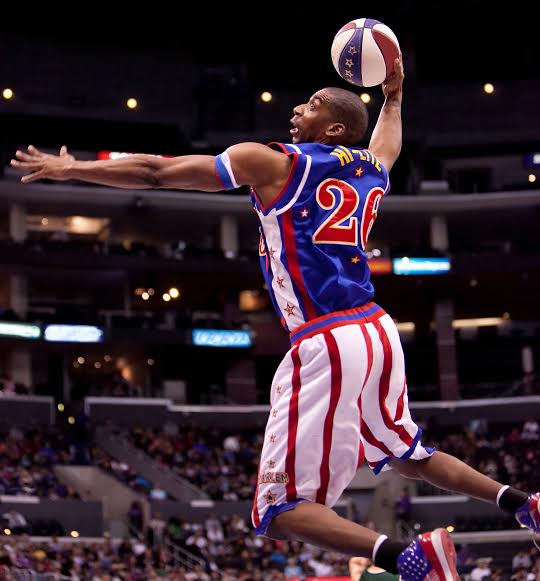 89 years after their 1926 founding, The Harlem Globetrotters are still touring the world as much as ever. With over 20,000 exhibition games played in well over 100 countries, the Globetrotters predate the NBA by over two decades. The legendary basketball team’s never-ending tour comes to the New York City area with shows at Madison Square Garden on December 27th and 28th, Long Island’s Mack Sports Complex on December 30th, Newark’s Prudential Center on January 1st, and Brooklyn’s Barclays Center on January 2nd.

Before joining the world-famous Harlem Globetrotters, Kris “Hi-Lite” Bruton had a storied college basketball career. Hi-Lite won NAIA First Team All-America honors, and in his senior year he won the Slam Dunk Contest during the 1994 NCAA Final Four weekend. Shortly after that, he was drafted by the Chicago Bulls in the 1994 NBA Draft’s second round. Injuries cut Hi-Lite’s NBA career short, but his professional career continued with stints in France, Cyprus, Japan, the CBA and the NBA’s D-League.

Fast-forwarding a few years, Hi-Lite joined the Harlem Globetrotters in 2001, having been referred by former coach Milton Barnes. Within his Globetrotters tenure, he has been part of plenty noteworthy events. Hi-Lite played in the first-ever basketball game on ice – which Central Park hosted in 2010 – beyond appearing on The Wendy Williams Show, sharing the stage at Nashville’s Grand Ole Opry with Charlie Daniels, and meeting Pope Francis. Hi-Lite was indeed there for the recent appearance on Good Morning America in which Robin Roberts was made an honorary Globetrotter, the 10th honorary Globetrotter in all.

Amazingly, the Harlem Globetrotters remain a family-friendly attraction all these years later, and Hi-Lite tackled some Q&A from Downtown to talk about life as a Globetrotter and dunking expert. Within such, I learned more about Great Assist, an incredible new charitable initiative that goes beyond the basketball court.

What is the best part of being a Harlem Globetrotter?

Hi-Lite: The best part of being a Harlem Globetrotter is being able to impact families in a positive way, putting smiles on the faces of so many people, and seeing the world through the eyes of others.

Is there something you wish more people knew about the team?

H: The Harlem Globetrotters represent goodwill, sportsmanship, fun, and family entertainment. We are also reaching out to our fans that need us on a special level. To learn more about how we can help you or other fans in your community that may be in need of a special touch, you go to www.greatassist.com for more information.

When did you first learn about the Globetrotters? Was it through one of their TV appearances like Gilligan’s Island or Scooby Doo?

H: I first saw the Harlem Globetrotters on a TV special. I remember the smile that Meadowlark Lemon and Curly Neal showed throughout the TV show. The way they played the game and entertained the fans was so spectacular. I will always remember that.

I believe a dozen or so people have been made honorary Globetrotters over the years. Have you ever encountered any of these folks?

H: I have had the privilege of meeting Pope Francis and Robin Roberts, and they both are well-deserving of the honor of being honorary Globetrotters.

How did the opportunity to become a Globetrotter come to you?

H: I was actually scouted by someone in the Globetrotter organization. I have been fortunate and blessed to have been able to play for such an iconic team that has amazed generations of fans for 90 spectacular years.

Having been a stand-out player in college, been part of NBA and CBA teams, and played professionally in Japan, were you ever worried of what some of your basketball peers would think of you pursuing the Globetrotters?

H: Oh no, not at all. My friends respect the Harlem Globetrotters and what they have accomplished since their formation. The Globetrotters have broken down barriers and they have been the first in many categories, and all are positive and groundbreaking. They also respect me and what I stand for and believe in. I’m a Christian and I believe in Jesus, but it’s not always easy to do what’s right – but my choice of joining the world-famous Globetrotters was not only the right choice, but a no-brainer.

You played basketball on ice in Central Park in 2010. Is that an experience you would consider doing again?

H: I would definitely love to play in Central Park again, but this time on more solid ground. (laughs)

What do you remember about your first-ever trip to New York City?

H: The thing that stands out more than any other in my mind was the tall, tall buildings. New York is fascinating.

Did you ever play on the famed West 4th Street courts?

H: No, unfortunately I haven’t, but I would love to play there one day.

Is there a city or country you haven’t yet played basketball in that you one day hope to visit?

H: I’ve played in a lot of places, but I’m always looking forward to new and exciting places to showcase my talents as a Harlem Globetrotter.

Do you have any plans to try and break any records in the Guinness Book Of World Records?

H: I would love to try and break the record for the highest dunk. That’s a dream of mine.

When you’re not on the court or on the road with the Globetrotters, how do you like to spend your time?

H: When I’m not playing basketball with the Globetrotters, I like to spend all of my time with my family. We enjoy fishing and hiking a lot.

Finally, Hi-Lite, any last words for the kids?

H: I would like to say to the kids out there to always try your best, work very hard, and most importantly, believe in yourself. And Hi-Lite wishes you all the very best!