Henry Rollins is ready for his Oct. 25 gig at the Gramercy Theatre, talks New York and more 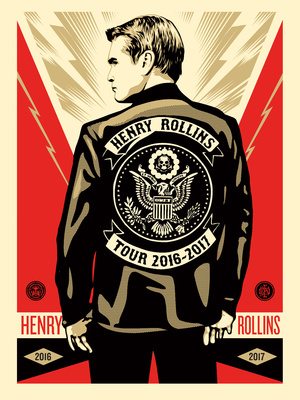 A true modern day Renaissance man, Henry Rollins has thrived as a musician, actor, television host, radio personality, record label owner, columnist, and comedic live performer. While having been the singer of Black Flag would have been good enough for many people, it was only the starting point for Henry, whose music achieved mainstream success with the 1994 Rollins Band release Weight. The last Rollins Band recordings came out in 2002, however, so Henry Rollins has been relying on artistic pursuits to pay the bills for nearly 15 years; he is currently the host of H2’s 10 Things You Don’t Know About after 41 episodes as host of IFC’s The Henry Rollins Show.

Henry returns to New York on Oct. 25 with a spoken word performance at the Gramercy Theatre. One night later on Oct. 26, he will appear at The Space At Westbury on Long Island. In support of these gigs, Henry spoke to Downtown about what keeps him going as a multi-faceted performer all these years later. He can be visited online at www.henryrollins.com.

When I interviewed you a little over 15 years ago, you’d said that your proudest accomplishment is that you’re still doing it. Is that how you still feel?

Henry Rollins: Yes and no. I am grateful to still be able to get a show. There are many in my age group who do not have the same good news. I do my best to reject pride. I think it clouds the perception. At this point, my gratitude is at the front of everything I do. It makes me want to deliver as best I can. I am amazed I am still in the mix.

A lot of people first discovered you as a vocalist. Along the way, you’ve also had success as an actor, a host, a writer, a label owner, and a stage performer. When forced into small talk with a stranger and they ask what you do for a living, how do you describe yourself?

HR: Usually, I am recognized before I am asked that, but it happens. I try to minimize the answer. I will say something true, like I have a radio show on a station on a university campus. I try to focus on something like that and then quickly ask what they do. Otherwise, to fully answer the question can make one think you are quite taken with yourself.

When was it that you realized the need to be diversified, professionally speaking? Or did you wind up with so many projects by accident?

HR: In the summer of 1984, I looked around and saw all the talented people I was surrounded by. Minutemen, Husker Du, Meat Puppets, etc. Between tours, they were working small jobs to get by. I knew I had not a fraction of their talent. In order to survive USA, I would need plans b, c, d, etc. I started working harder on the writing, the talking shows. I knew that music wouldn’t sustain me. The music actually did turn into something that sustained me, but while I was doing that, I was working on other skills and saying yes to work. I kept at all of it. I have basically been knocking myself out for 30+ years on all this stuff and at this point, don’t know any other way to go about it. It keeps things interesting, that’s for sure.

For someone who hasn’t seen you live before, how do you describe one of your spoken word shows? Is there a theme to this upcoming tour?

HR: I will be on-stage talking at a high rate of speed for an hour and some. There is no theme, although travel stories usually play a part. I travel all over and bring stories back to the stage. There is a lot of inherent humor in a lot of the stories.

What do you remember about the first time you ever performed in New York City? Where was it?

HR: I think it was with Black Flag in December of 1981 at the Peppermint Lounge, where I had seen them play months before. It was crazy to have gone from the floor to the stage. I don’t remember anything about the show.

HR: I listen to as much music as I can. I read.

Finally, Henry, any last words for the kids?

HR: Science is your friend. Start voting as soon as you are able.