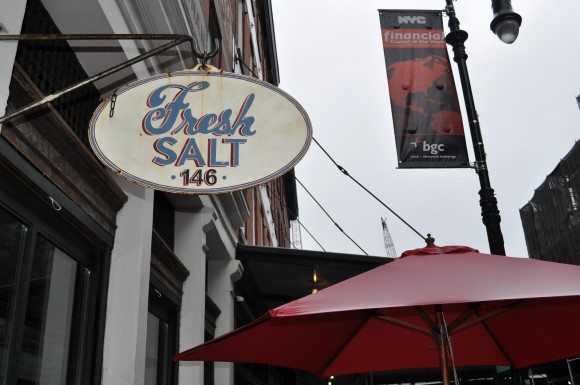 Lower Manhattan is home to many lovely restaurants that have amazing dishes and cocktail drinks. But finding a relaxing restaurant and bar is hard to come across. Luckily, there is one just a few steps from The South Street Seaport with the name of Fresh Salt. DOWNTOWN Magazine was able to have a small chat with the owner of Fresh Salt, Sarah Williams, and without a doubt, will the restaurant (and iy already has) become a favorite to many.

Fresh Salt opened in September of 2004 back when “the Fulton Fish Market was still operational,” says Williams. She continues to further detail the fish market when it was still operational by saying, “the market use to be all in the seaport. It used to be the second largest outdoor fish market in the world, but now it [has moved] to the Bronx. It had been here for over a 100 years.”

Fresh Salt, before turning into a restaurant, used to be one of the few remaining fish markets in the area.  “It would originally open at 8 a.m. for bagels and coffee [because the workers would] actually get out of work at 7:30 a.m., [or even] 8 a.m.,” says Williams. “[But] when people came in here at 7:30, 8 a.m. and realize that I was standing in front of a wall of alcohol, you know, they are getting out of work and they want a drink like everyone else. So I started to have happy hour from 8 a.m. to 10 a.m. everyday.”

Eventually, when the fish market had moved to the Bronx, along with its workers, the time of operations for Fresh Salt had changed.

But what makes this place so unique is its location. Williams chose the location of the restaurant because of its “off the beaten path [in the year of 2004] and people tell me that it still feels like you are not in the city when you are near this historic [area]. It just feels calmer and I think that is really appealing.” And to go with the flow of the calm feeling in the area, Fresh Salt has a lovely rustic feeling with metallic flooring, hardwood tables, light and dark but neutral colors, and soft lighting.

Happy hour is now everyday from 4 p.m. to 8 p.m. with specials including $4 draft beers and well drinks.

Fresh Salt is not only known for their $4 drinks during happy hour, but also their delicious food. Some of the popular dishes include their homemade mac and cheese  and “The Salt Sandwich, which is Spec [and has avocado and chipotle mayo] and everybody is kind of addicted to it,” says Williams. “For the cocktails, we have a salt gimlet that is basically a jalapeño flavored tequila. It is really good and it has a nice kick to it.”

However, if one is feeling especially hungry, Williams suggests trying a sandwich with a side. “If you are really hungry, I would suggest you to try one of our delicious sandwiches with mac [and cheese] on the side or the pork sandwich, which is really good too. Our cocktail menus are short and sweet, but it is definitely good.”

So instead of finding the ‘hot’ restaurant in Midtown, come over to lower Manhattan and try some of the amazing dishes and cocktails that Fresh Salt has. With The South Street Seaport just minutes away, exploring that area before or after lunch or brunch won’t be a hassle.