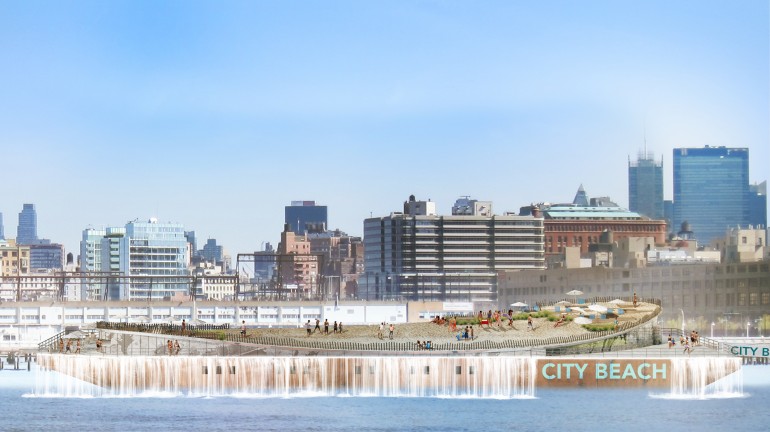 When it comes to vacation destinations, New York has it all: historic landmarks, savvy venues, a thriving nightlife, top-notch theatre, music, art…everything, that is, except for a beach. In fact, it’s common knowledge that many New Yorkers escape to the Hamptons every once in a while to get a taste of the one luxury that the city can’t provide. Popular opinion suggests urban concrete simply doesn’t pair well with the sand and sea. Designer Blayne Ross disagrees.

Earlier this month, Ross revealed his plans for City Beach New York – a floating barge filled with sand, waterfalls, and eventually, sunbathing beach-goers. Ideally, the beach would feature free-admission, bringing in revenue from purchases such as beach chairs and umbrellas. Ross also hopes to add retail shops and restaurants to the floating island, which will anchor at various NYC Hudson River ports.

Critics of City Beach worry about the harmful effects that the giant barge will have on the surrounding environment. But Ross promises to use sustainable materials whenever possible. He even plans on using a waterfall to oxygenate the surrounding river water.

Perhaps Ross’ most ambitious goal of the project is the marine science exhibit that he plans to include on the lower deck. Obviously, he’ll need major funding to make his dream a reality – specifically, $200,000. A City Beach New York IndieGoGo campaign is rumored to launch soon, which will contribute to their already established thunderclap campaign. Beach enthusiasts can also join the mailing list by visiting the project’s official website at citybeachnyc.com.