Bob Gruen is not only one of the most famous rock photographers, but one of its most prolific as well. If you’ve seen a photo of John Lennon wearing a “New York City” t-shirt, Bob took it. If you’ve seen a photo of Led Zeppelin standing in front of an airplane with their logo on it, Bob took that one, too. He has captured countless iconic images over the past five decades that we’ve grown accustomed to seeing on posters, shirts and the pages of books.

As a 50-year resident, Bob Gruen’s name is practically synonymous with downtown New York. Thanks to Carol Klenfner’s connection, I had the opportunity to conduct a Q&A with Gruen about his past, present and future, garnering a rare look at the man behind the lens. His work ethic is to be admired, and his “last words” are inspiring to all, not just to photographers. Much of Gruen’s classic work has recently been reissued, but there is a permanent display at Edition Hotel at 5 Madison Ave. [Editor Note: This article originally appeared in the Spring 2016 issue of Downtown Magazine.]

What was your first paying gig as a photographer?

Bob Gruen: I lived with a rock band [Glitterhouse] in the ’60s, and when they got a deal at Atlantic Records, they used my photos for their publicity. Atlantic then hired me to shoot Tommy James and the Shondells, when they were opening at a presidential rally for Hubert Humphrey.

What is it that you like most about living downtown?

BG: There is less traffic, and it’s quieter, because most of the streets are shorter and smaller than uptown, and the buildings are lower, so there’s more sky. But we’re close to everything going on in the city.

When did you first move downtown?

BG: I moved to Sullivan Street in June 1965, and I thought the Feast Of St. Anthony was a great welcome. I’ve lived in the West Village since 1970.

What is it that keeps you living in Manhattan, as opposed to moving to L.A.?

BG: I’m not moving to L.A., because I’d only last a few days there! The sun is nice, but it’s way too spread out, and there is so much traffic, it takes hours to get anywhere, and when you meet someone in L.A., they say, “How are you doing?” In New York they say, “What are you doing?” I like to be doing things.

Is your neighborhood on the verge of becoming another SoHo?

BG: I think the West Village is becoming another SoHo with high-priced shops and luxury condos, but I’m not ready to move.

Do you have a favorite venue in Manhattan for photo shoots? Or at least a favorite for concerts?

BG: I don’t really have favorite venues where I take photos, but I always like to see shows at the Beacon [Theatre], because it’s such a beautiful theater, and the sound is good. Past favorites were Max’s [Kansas City], The Bottom Line, CBGB’s and Don Hill’s, all now gone. But now, I think, for a club, I like Bowery Electric.

To you, is music good these days? Or are the best days of pop and rock behind us?

BG: I usually think the best day is today. You can’t go back, and I find good music all over town.

In October, your book on John Lennon was re-released. How does it compare to the original release?

BG: The new edition of John Lennon: The New York Years has a new cover and 16 new pages with 24 photos not published before.

Do you feel that there are any misconceptions about John? Or is there something you wish more people knew about him?

BG: John was very open about his life; I don’t think there are misconceptions. If people really want to know about John Lennon, they should read the last two interviews he gave — the BBC interview by Andy Peebles and the Playboy interview by David Sheff — both available as books. John expressed himself very clearly and had learned a lot from his five years of raising Sean [Lennon].

Do you have any exhibits in the works? Or any other books?

BG: There is a new permanent installation of 45 of my photos in the Billiard Room [in the Clocktower Restaurant] at the new Edition Hotel on 24th Street. This year, I released a new book of photos of Yoko Ono, See Hear Yoko, and there was a reissue of…The Clash. Photographs by Bob Gruen….My large 500-photo monograph, Rock Seen, is now in its 4th printing. I’m currently working on an autobiography.

Is there anyone you haven’t yet photographed but still hope to?

BG: I’ve met many very interesting people, and I can’t say there is anyone special I can think of I’d like to photograph. But I go out all the time, and I’m always happy to meet new people.

If a person were thinking of getting into photography as a proper hobby, is there a particular camera you’d recommend to start with?

BG: The camera doesn’t matter as long as you’re comfortable with it; they all do mostly the same things. It’s what you do with it that matters.

Is there a photograph or a particular shoot that you’re most proud of? Or see as your biggest accomplishment?

BG: I don’t like to list “favorites,” but certainly my photo of Tina Turner. Catching multiple images in one shot is a good one, and the world’s favorites — my John Lennon in the New York t-shirt or Led Zeppelin in front of the airplane — are pretty good, too.

BG: I’m busy with my career most of the time, but I like to travel and visit with my family and grandchildren now.

Finally, Bob, any last words for the kids?

BG: I always tell people that if you take a lot of pictures, you’re bound to get a good one, and if you only show the good ones, people will think you’re good. Other than that, learn from the past, look to the future, but live in the present. 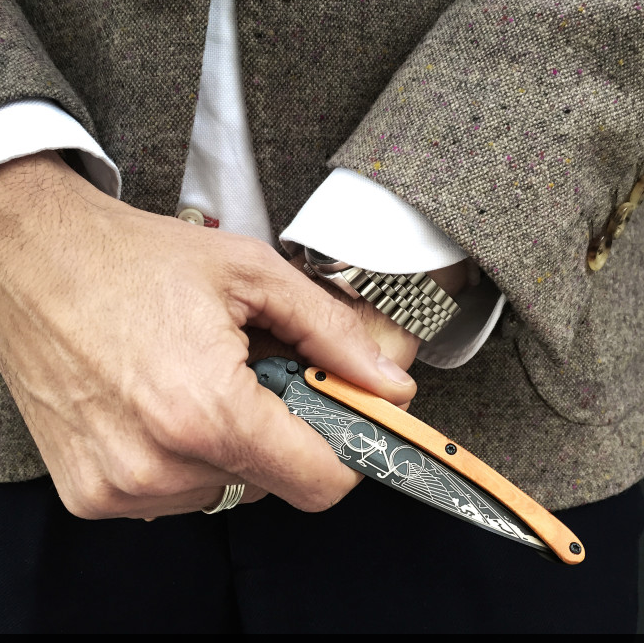 Top Features to Consider when Buying a Pocket Knife

Pocket knives are a must-have for people who enjoy outdoor activities. They feature compact designs, and they...