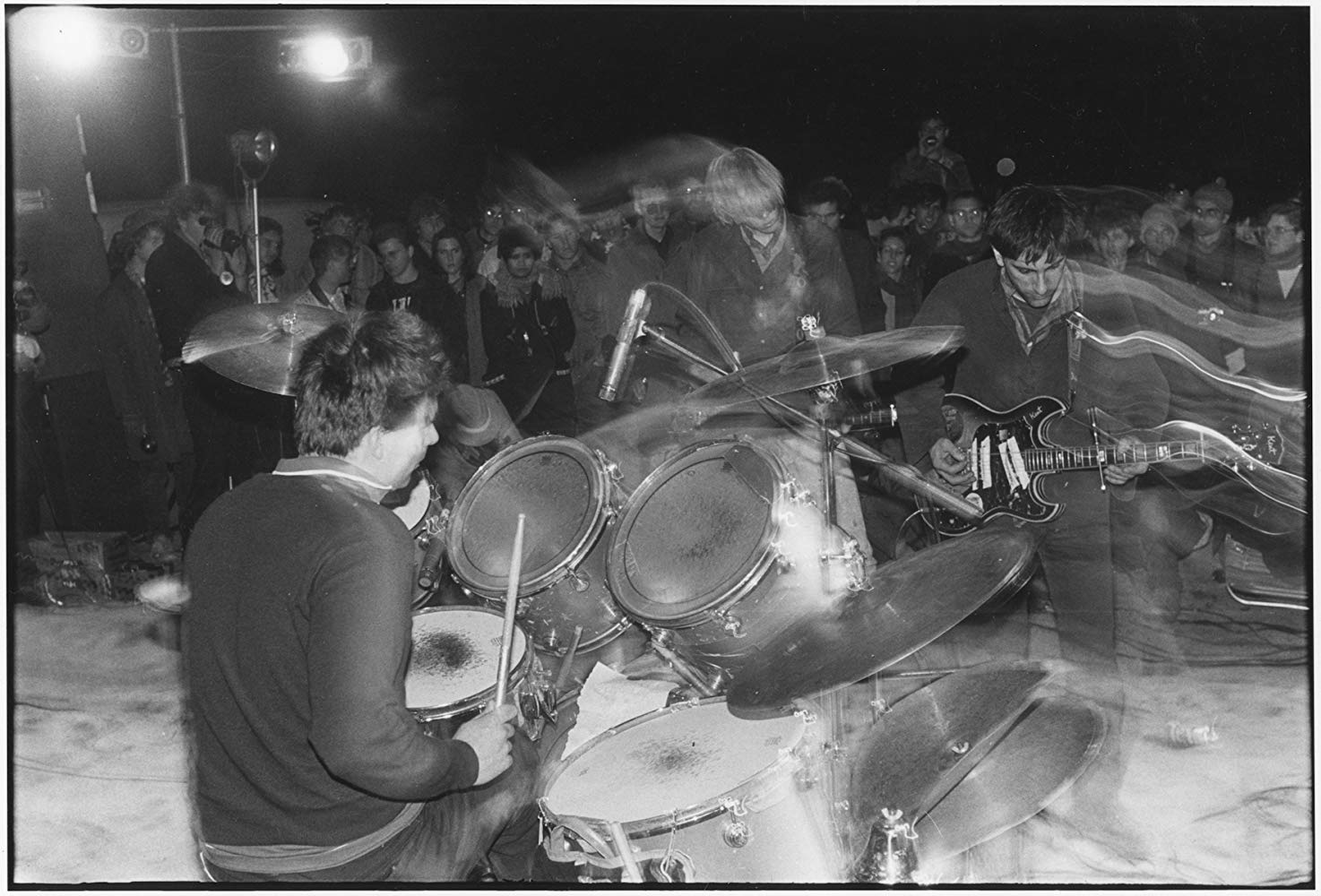 The story of punk rock in the US reads a bit like the story of jazz: a time of musical experimentation where even influential moments and artists can slip through the cracks of history. Many stories were never written down, and many artists failed to leave a trace: no recordings, few pictures–only the memories of those who were there to see and know them.

That’s part of what makes Desolation Center such a treat. The documentary is a wealth of never-before-seen pictures and videos, revealing a near-forgotten story about a series of guerrilla music and art performances in 1980’s Southern California that changed the music world. Director and sometimes-protagonist Stuart Swezey mixes buried photos and live performance footage with interviews of attending musicians and concert-goers. The result is a brilliant, if sometimes hyper-focused, story of youthful innovation and rebellion, and which directly inspired projects like Lollapalooza, Burning Man, and Coachella.

The ‘80s So Cal punk scene, as Swezey remembers it, was a hotbed of diversity and musical experimentation. It was also a favorite raiding target for the police, who were looking to drum up headlines and media attention. At 20 years old, Swezey founded a production company, Desolation Center, aiming to produce shows where the police wouldn’t find them. Early attempts focused on obscure Los Angeles locations, with no success. As long as they were in the city, he decided, the police would find them.

The solution he came up with was a secret concert in an undisclosed location in the Mojave Desert. Punks clamored onto bright yellow school busses for an hours-long drive into the wilderness. The “stage” was small and ran on a generator that barely worked. The wind and sand were so severe that Swezey had to reposition the busses to protect the stage. Nobody made any money; everyone was dehydrated; it was a huge success.

Over the next few years, Desolation Center produced only a few more shows. A second desert show featured pyrotechnics artists Survival Research Laboratories, and German experimental band Einstürzende Neubauten, who made music with scrap metal and construction tools. Another show performed on a hastily-crafted stage built onto a whale-watching ship. Each attracted more attention while focusing–for the most part–on the local punk rock scene.

We are lucky that so much of these events were preserved. Desolation Center disbanded after only a half-dozen shows–long before they reached the mainstream–leaving the underground sensation to fade into obscurity. As of this writing, neither the film nor the production company have wikipedia pages. If the performances had happened a decade earlier, the documentary probably wouldn’t exist. Instead, home video technology captured rare performances, reactions, and emotions in ways that the cameras of the late ‘60s and early ‘70s could not have. It is one thing to hear about Survival Research Laboratories blowing up a cave, or to see a picture of Einstürzende Neubauten banging rocks on sheet metal. The videos bring the stories to life.

If the documentary suffers from anything, it is overly-focus and a sometimes-monotonous pace. The story marches from one performance to the next, start to finish, with little consideration for a larger story or evolving cultural context. For such an influential series of events, there is little discussion of changing culture until modern festival founders pop up at the end to cite Desolation Center as an inspiration. The format, at times, feels like a count-by-numbers procession of events which begins to become tedious as the story goes on.

Overall, Desolation Center is still a fascinating watch. If you’re a punk rock enthusiast, you’ll love the never-before-seen footage and reflections into an influential music scene. If punk rock is not your thing, there is still a wealth of hilarious, absurd, and sometimes heartfelt anecdotes of a movement full of anarchic experimentation and youthful rebellion. If you’ve never given much thought to punk rock before, bring a pen. You might want to write down a band name or two for later.