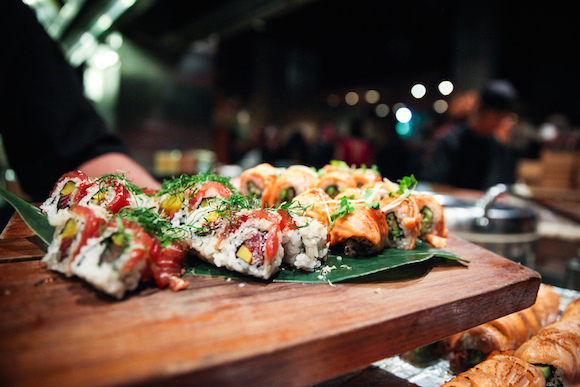 Picture yourself at a lavish cocktail party straight out of Sex and the City and this is what the 10th anniversary celebration of EN Japanese Brasserie felt like.

On Tuesday night the well-known West Village restaurant, EN Japanese Brasserie, celebrated its 10th anniversary with a blowout party hosted by Martha Stewart, Julian Schnabel, Questlove and founder Reika Yo. The event featured many of the signature Japanese dishes and cocktails that have made the restaurant so popular over the past 10 years. The high-class, authentic Japanese restaurant is one of Martha Stewart’s favorites and she was thrilled to come out and celebrate the anniversary with EN Japanese Brasserie.

Chef Abe Hiroki offers a modern approach to the rich traditions of Japanese cooking, always savoring the peak flavor of ingredients. Working with his favorite fishmongers, foragers and farmers and using seasonal ingredients, he prepared multiple traditional Japanese dishes that are frequently served at the restaurant.

The party was attended by some of the trendiest people in New York and the outfits seen throughout the evening looked like they came straight from the runway. The food samples were exquisite, the open bar yielded many happy party goers and the evening was not one we will soon forget here at DOWNTOWN. Everyone hit the floor dancing as great music was played throughout the night.

Head to EN Japanese Brasserie to experience authentic Japanese food and style and for an all-around great evening.

A scene from behind the bar. Photo: Courtesy of Angela Pham/Billy Farrell Agency

Questlove and Reika Yo at the 10th anniversary event. Photo: Courtesy of Angela Pham/Billy Farrell Agency