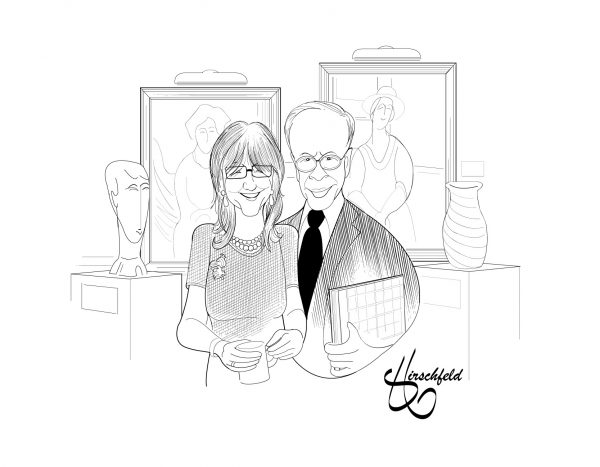 For decades, the iconic faces of Broadway were brought to life through the iconic animated caricatures unmistakably drawn by Al Hirschfeld.

Hirschfeld, the subject of the award-winning documentary, “The Line King,” created portraits of many of the most famous New York actors and personalities throughout his life, adding his unique and distinguishable style to each portrait.

Sadly, the great New York artist and distant cousin of New York developer and philanthropist, Elie Hirschfeld, passed away on in 2003.

But miraculously, his work is carried on today by young Matt Hirschfeld —another relative of the cartoonist extraordinaire!

Matt Hirschfeld grew up in St. Louis, where Al lived before moving at age 10 to New York. Matt began drawing at an early age and was constantly exposed to Al’s drawings — and to reminders from relatives that he had the Hirschfeld art gene.

“There’s a scene in ‘The Line King’ when Al is on a computer and he says that it would take another lifetime to learn how to use the computer to do what he does. That’s when my eyes lit up, and I thought it’d be interesting to do just that. He drew the whole 20th century, and I want to draw a chunk of the 21st.”

Elie recognized the brilliance of Matt’s work and commissioned him to create a portrait of himself and his wife, the distinguished Dr. Sarah Schlesinger Hirschfeld M.D. who is a Senior Attending Physician and Associate Professor of Clinical Investigation at The Rockefeller University.

“Al was not only a relative, but a dear friend and I admired his work greatly,” Elie Hirschfeld said. “Finding Matt was unbelievably fortuitous and if I can expose his work to others, I’m thrilled to do it.”

“Al was the consummate documentarian of the faces of the 20th Century,” Elie Hirschfeld says. “Matt‘s work is a stunning and appropriate continuation of the legacy he created.”

See more of Matt’s exceptional work on his website.