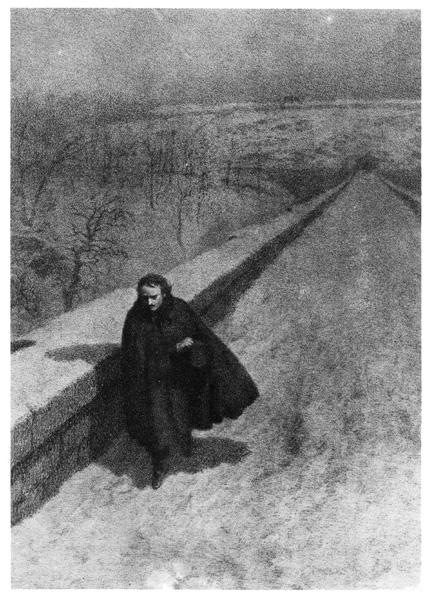 Edgar Allan Poe on the High Bridge, an imagining made by illustrator Bernard (B. J.) Rosenmeyer, circa 1930

The skies they were ashen and sober;

The leaves they were crisped and sere-

The leaves they were withering and sere;

It was night in the lonesome October

Of my most immemorial year…”

It is early evening in late October. The gray sky serves as a haunting backdrop for the falling leaves. It is the quintessential setting for the spirit of the season. Halloween is only days away. Festive conversation centers on the harvest celebration, hayrides, apple cider and the quest for a perfect pumpkin. Others turn their thoughts to witches, black cats, graveyards and of course, Poe.

On October 9, 1849, the die was cast and the legend of Edgar Allan Poe was born. Just two days following his mysterious death in Baltimore, a hostile obituary appeared in the New York Daily Tribune. The first paragraph set the tone for what would shape the Poe reputation and become the accepted opinion of the man’s character into the next century:

“Edgar Allan Poe is dead.  He died in Baltimore the day before yesterday. The announcement will startle many, but few will be grieved by it. The poet was well known personally or by reputation…but he had few or no friends…” The article declared him as a man without morals who “walked the streets in madness or melancholy, with lips moving in indistinct purses…”

The slanderous notice was penned by Rufus Griswold, a mediocre writer, who had first met Poe eight years earlier. Griswold published the malicious attack under the cowardly pseudonym, Ludwig, because Poe had delivered an uncomplimentary lecture on Griswold’s most popular anthology compilation. He was unforgiving and harbored an intense dislike of Poe throughout the remainder of his life. Ironically, Poe had personally appointed Griswold as the executor of his literary estate! By this odd twist of fate, Poe had become the victim of revenge, much like the characters in some of his own stories.

Critics followed with preposterous allegations that Poe possessed the same qualities as his fictional characters: drug addiction, neurosis, and psychosis. The more reliable accounts of Poe’s character suggest a disillusioned introvert, insecure, an egotist, who was possibly an alcoholic. He lived his adult life in utter poverty while perfecting his craft as a writer, poet, editor, and critic in Richmond, Baltimore, Philadelphia, and New York. The Lower Manhattan residences where he made his mark included tenements at 137 Waverly Place and 113 ½ Carmine Street in 1837; 130 Greenwich Street and 18 Amity Street in 1844; 85 West 3rd Street, previously known as 85 Amity Place, and 195 East Broadway in 1845. Poe also lived uptown at a farmhouse during the summer of 1845, while completing The Raven, which is now 84th Street, between Broadway and Amsterdam Avenue. In the spring and summer of 1846, Poe moved to Turtle Bay, at a farm located at 47th Street and Second Avenue. His final New York residence was at a small farmhouse in Fordham from 1846 to 1848, on Kingsbridge Road near Fordham Road, which was later moved in 1913 to its present location in Poe Park, at Kingsbridge Road and the Grand Concourse.

America’s earliest writers considered him as everything from mediocre, to having mere flashes of brilliance. Ralph Waldo Emerson referred to him as “The Jingle Man.” James Russell Lowell stated Poe was “three-fifths genius and two-fifths sheer fudge.” T.S. Eliot later remarked his intellect was of “a highly gifted young person before puberty.”

The real tragedy was that the acclaim Poe so desperately sought during his lifetime would not originate in his native America, but in Europe shortly after his death. What is indisputable is that Poe became the most well-known and first widely-read American writer to influence literary Europe. The French poet, Charles Baudelaire translated his writings, influencing Mallarme, Verlaine, and Rimbaud of the Symbolist movement. His notoriety spread to Germany where Nietzsche, Rilke, and Kafka were captivated by Poe’s explorations into the irrational worlds of imagination. In Russia, his presence impacted Dostoyevsky’s characters and themes. Poe also influenced many English, Irish and Scottish writers, including Stevenson, Kipling, Joyce, and Doyle.

The tide turned in America during the early 20th Century, as advanced scholarship elevated Poe to an American literary icon. He is regarded as the father of the modern horror story (The Masque of the Red Death; and The Fall of the House of Usher), and an acclaimed poet (The Raven; Annabel Lee). Scholars came to recognize many of Poe’s additional contributions: the father of the detective story (The Murders in the Rue Morgue; The Purloined Letter; and The Gold Bug); an innovator in modern science fiction, fantasy and satire (The Balloon-Hoax; and MS Found in a Bottle);themes of evil, psychotic, and split personality (The Cask of Amontillado; The Tell-Tale Heart; The Black Cat; and William Wilson), as forerunners to the schizophrenia diagnosis. Poe’s prose-poem (Eureka), a cosmological treatise on the creation of the universe, set forth his explanation of the “night sky” conundrum, which is now almost universally accepted by astrophysicists. Poe, as a critic and editor, sought to raise the quality of American literature by promoting nationalism with an unwillingness to accept England’s continued domination of the book-publishing market in America.

The image of Edgar Allan Poe as the mysterious, brooding loner, a misunderstood genius, lurking in the shadows of our souls, will never escape him, despite his many enduring contributions. The testimony of the poet, Walt Whitman captures the image of Poe that will remain with us forever: “In a dream I once had, I saw a vessel on the sea, at midnight in a storm…On the deck was a slender, slight, beautiful figure, a dim man, apparently enjoying the terror, the murk and the dislocation of which he was the center and the victim. That figure of my lurid dream might stand for Edgar Poe, his spirit, his fortunes and his poems-themselves all lurid dreams.”

Byline: John Esposito is a freelance journalist from New Providence. His work has appeared in various newspapers and magazines including USA Today, The Philadelphia Inquirer, Greenwich Time, Star-Ledger, Downtown Magazine – NYC, UNICO, and The Irish Echo.