Ed Helms in “The Clapper”: A Meditation on Fame and Self Worth 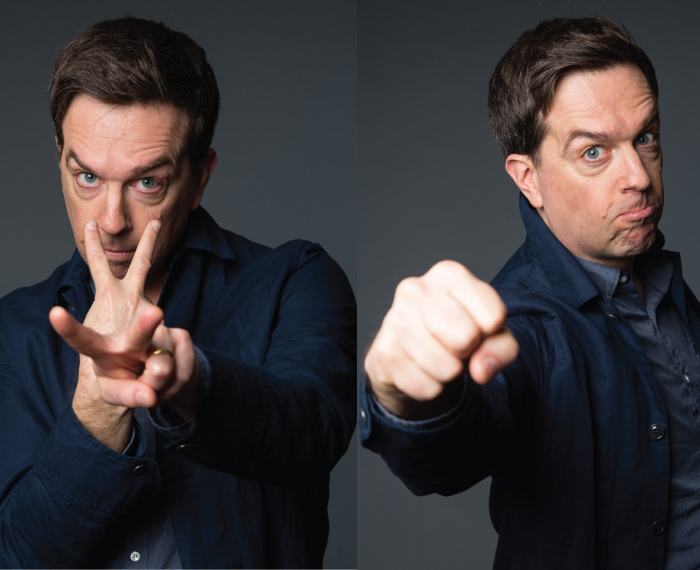 In Hollywood they say if you are on time you are late. I am forty minutes early but might as well be ten late. When I walk in the studio where I am supposed to meet the players and makers of the movie “The Clapper,” the other writer has already taken the quiet corner in the office, and the director that I am supposed to interview is already being interviewed. A pretty brunette says “Hi! You must be the writer. Ed is being photographed right now. When he finishes, you can talk to him. We have to take him out of here fast because he is allergic to cats!”

I am here and he, Ed Helms, is here to talk about a tale that clashes with the mayhem that surrounds the promotion of a film. A tale that intersects what people think of Hollywood; a place where everyone lives in glitz and fame, with the reality of what is: a place where mere mortals, like most of us, work in an industry that moves the city. In “The Clapper,” Eddie, played by Helms, is a clapper for infomercials who sees his simple and happy life blow up when fame finds him.

As I’m trying to find a quiet place for the interview, Helms sits in a corner strumming a guitar. I pull up a chair and ask how he is doing, he looks me in the eye and says: “Fantastic” which gives me no reason to doubt that this is exactly how he feels, cat and all. I am feeling a little unsettled and since music is always grounding to me I ask if we can just keep doing this (meaning him playing and me listening quietly). He says that we may not be able to hear the recording (meaning the recording I’m supposed to be doing for our interview).

Camila Gibran: Maybe you should just become a musician instead, what do you think?

Ed Helms: I’m halfway a musician. I have a band, but maybe it’s time to just bag acting and go full time into music.

CG:  Let’s talk about acting and the stories it can tell. You are also a producer on “The Clapper.” Why did you choose this narrative?

EH: Well, this is a very powerful story to me, but ultimately it’s very funny which is what I’m drawn to. Also, there’s a tremendous amount of pathos in this story. It’s about a person who sort of becomes famous against his will. Culturally there’s this sort of belief that fame is wonderful and it’s this thing that everybody chases after, that it somehow has intrinsic value. But here’s a guy who isn’t really seeking it and ultimately it just causes a lot of blow back in his life and he doesn’t want it. I think that’s a really rare and special person who is just kind of ok with the way things are. His only ambition is to be content, and to have a healthy relationship.

CG: Which is deep down probably what every human being wants…

EH: Yes, but most of us are sort of saddled with ambition and striving and trying. So in a way, this very humble guy, who lives a very small and contained life, he is not someone we usually make movies about. He is not someone who you would pass by on the street and think, ‘I bet that person’s interesting.’ But then, when you start to peel back the layers and you look at this person, he’s complex and he’s very funny, but also he has a powerful story to tell.

CG: Today we are inundated with ways of telling stories, so many different kinds of media. Why film?

EH: I grew up with movies, I grew up loving movies, and loving television, and they were very fixed formats at that time. In the 80s and 90s. You had to go to a movie and then eventually, when I was a teenager, you could rent a movie, on a tape, and watch it at home. All of these limitations preserved this form as a convention. We had feature films and TV shows. Now, there are so many endless streams of media, and endless ways to consume media, that it can take so many different shapes and forms, playing different lengths, TV shows now have no fixed length, when you watch what would be a half hour comedy, on Netflix that can be 20 minutes, or it’s 40 minutes, it’s just whatever and that’s kind of liberating and beautiful in one way, but in the same way that a sonnet is a defined form, and a great poet is going to create a beautiful sonnet by adhering to that form, or a haiku or something, we are sort of losing those structures and I think losing limitation also endangers quality in some ways.

CG: Do you believe the classic structure of film should be preserved, to protect the quality of creative work?

EH: I think that we took for granted for so long that a film was a special thing and more then ever we can sort of look at it as a very defined art form that has built in limitations and those are beautiful and those help us construct a format that’s understood.

CG: The world is a very different place than a year ago. Has this changed what you, as a creator and performer, are drawn to?

EH: I’m still drawn to things that feel positive and uplifting at the end of the day, or really funny. I think that this movie has a lot of both. It’s a very thoughtful and deliberate meditation on fame and self worth and love, and at the end of the day, it’s a beautiful, a very hopeful funny and poignant love story. In it’s own way, it’s a fairytale, and I love that, just putting something positive out there in the world, because it feels like the world needs it.

With that I tell him I’ve got what I need. Leslie, the photographer says she wants a few more shots with a different backdrop and without hesitation he agrees. He gets up, lays the guitar against the wall, which at some point during the interview he had stopped playing, and follows her.

I stay where I am, watching as actors, publicists, assistants move around the room striving. Thoughts linger: about being saddled with ambition and the idea that fame has some intrinsic value, about self worth, the concise way of telling a story and the contents of one’s life.

And for a moment I wonder, if we could slow down the movie of our own lives, would we then be content with what we have? And if so, on any given day as we pass each other on the street, would our thoughts be: “I bet this person is interesting.”