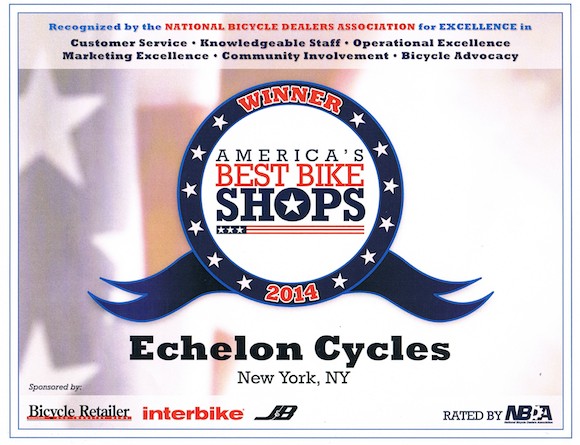 Echelon Cycles, located in the West Village, was recently named one of America’s Best Bike Shops by the National Bicycle Dealer’s Association. It is estimated that 4,100 local bike shops exist in the United States, a number that excludes the large box stores. To be recognized for such an award involves a number of accomplishments.

First and foremost, all shops interested must be independent with a physical structure that features a service department, sells bicycles and also sells parts and accessories. Shops seeking this prestigious honor are required to complete an extremely detailed application. They must explain what characteristics of their shop make them unique to other shops, what contributions they make to create a more bike friendly planet, and lastly how they develop customer loyalty. In addition, they are visited by a mystery shopper and awarded points based on the shopping results. Only the highest performers are then chosen for this award.

I recently visited Echelon to do my own assessment of this outstanding award. I sat down with co-owner, Pablo D. Castro, and it did not take long for me to realize why this shop made such a herculean list.

Born and raised in Manhattan’s LES, Castro’s love for the bicycle began at an early age. In his early 20’s, before the fax machine was invented, he was a messenger in the city for almost 10 years. He began racing during that time and was fortunate enough to live in Europe, competing in numerous European races. After returning from Europe, he enrolled at the Fashion Institute of Technology and completed his degree in Fashion Design. It was here that Castro nurtured his fashion talents and his attentions to detail, something that is quite evident when you visit his shop. It was during the economic recession that Castro realized he wanted to break away from the corporate life and give something back to society. During our conversation, Castro was quick to give credit to his lovely wife Nana for suggesting that he return to cycling by opening a bike shop. Teaming with his good friend Daniel DeNigris, a graduate of the University of Connecticut, the two sought out a location for their shop. Ironically, it was one night while they were out having dinner in the West Village that they discovered their current location, 51 8th Avenue at Horatio Street, a perfect fit for the shop.

Since opening five years ago, Echelon Cycle’s goal has been customer service and attention to detail. Castro was quick to point out that he does not discriminate, giving the same attention to his customers regardless of their monetary desires. “Family” is the word he uses repeatedly.

“When you buy a bike from us, you are a lifelong member of our family,” he explained. “We offer lifetime adjustments as long as you own the bike.” Echelon Cycles services a wide range of customers from kids to racers.

This philosophy is further demonstrated by his relationship with his staff. He repeatedly praised their knowledge and work ethic, and how important it was to the shop’s success.

So the next time your needs involve a bike shop, consider a short trip to the West Village and speak to either Pablo or Daniel. You will immediately understand why Echelon Cycles is one of America’s Top Bike Shops.