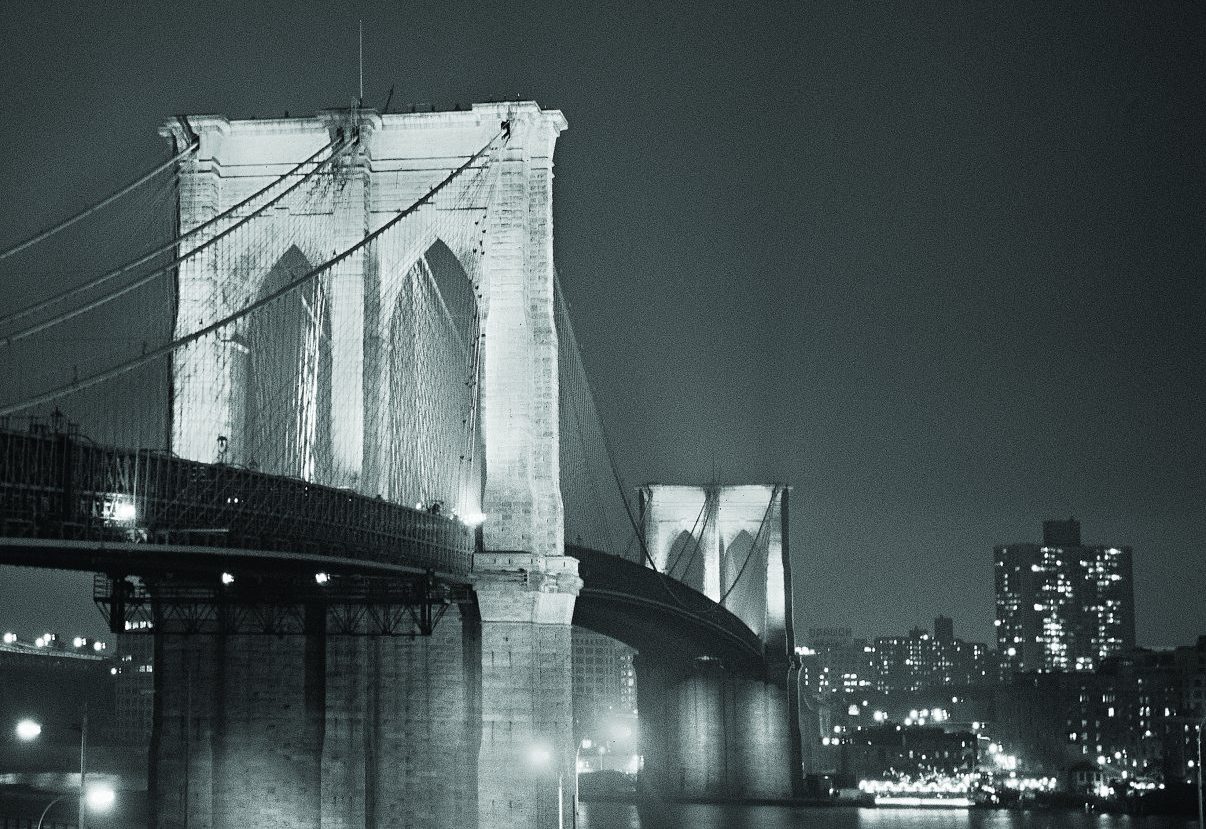 Photography and excerpts by Barbara Mensch

From her loft on Water Street, Barbara Mensch can almost touch the massive approach to the Brooklyn Bridge. “It’s my muse, it is always with me,” she says. For over 30 years, Mensch has been photographing the Bridge and the Seaport area, and her work is a visual and oral history of an area that is a fascinating part of the history of New York City. Her books—In the Shadow of Genius and South Street—reveal hidden truths about one of the most storied neighborhoods in New York. In 1999, Mensch was given unprecedented access to photograph inside the massive stone structures that make up the approach.

From In the Shadow of Genius: I showed up at the makeshift office, located in a trailer next to the bridge. The foreman gave me a hardhat and an industrial flashlight, then he designated one of the construction workers, “Big Mike,” to escort me. As we walked through the same open door that I had peered into months before, groups of laborers, carrying tools and safety gear, were going in and out. With a rush of excitement, I was about to explore the depths of the Brooklyn Bridge.

Following my escort through the metal entrance, my eyes adjusted to the void illuminated only by a few construction lights. The smell of mildew and choking dust intensified as we continued further in. I wrapped a handkerchief around my nose and mouth, following my guide who pointed with his flashlight to a large hole in the ground, which seemed to reach down to at least fifty feet. The long ladder, placed without any reliable support, was leaning to one side of the hole. Descending the ladder first, “Big Mike” shouted: “Follow me.”

The South Street seaport bears little resemblance today to its rough and tumble fish market beginnings. Its history is the origin story of New York itself, and that history is riddled with romantic seafaring adventurers, rule- breakers, mob bosses, and hard-working men and women who built this city with calloused hands, bent backs, and the basic human desire to survive. Mensch’s South Street captures the Seaport—through photos and stories—in all of its rough drama and determination.

From South Street: I crossed Pearl Street, past the Seaport park, and who comes along but the captain on the N.Y.C. police force. “Frankie, we were out in Brooklyn today, we’d like to talk to you.” And then along the sidewalk comes this Irish guy that we’d see hangin’ around the market every night. We nicknamed him “The Beard.” He came walking up briskly. He acted very personable. Then he said, “Would you like to get into the car so we can sit down and talk?” In the car they told me, “Be a survivor, so-and-so is going to go to jail, and his brother, and so-and-so from Peck Slip is going to jail, you be a survivor. We know how it is down there, we see you work hard, you get all that fish water on you, and the smell, and working hard, and you get wet, you have to work hard for a living, we see what it’s like down there in that market, it’s a rough place, that’s a terrible place.” They kept trying to impress upon me to be a survivor. A lot of people were going to go down. And I could make up my mind, make a decision, save myself and not go down with the rest. I called my lawyer that night and went the next day and found out that they were going to give me immunity.