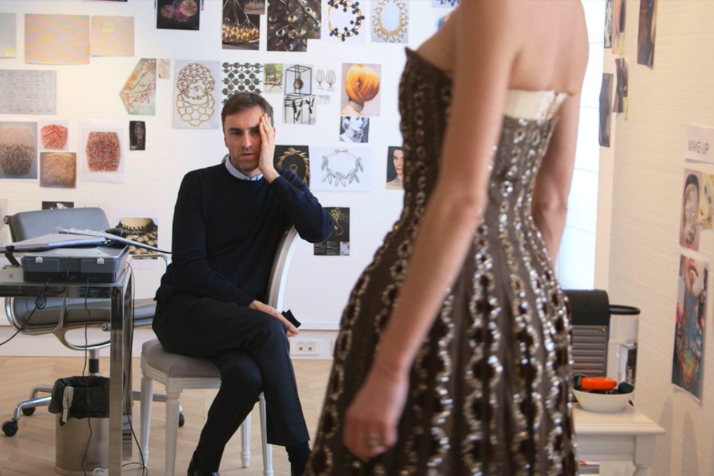 The film focuses on Raf Simons, the 46-year old Belgian designer who became Christian Dior’s creative director in April of 2012. Simons took over after John Galliano was dismissed from the post following his alleged anti-Semitic remarks and generally unstable behavior.

The main focus of the film will be this tense, transitionial period at the fashion house, in which Simons had only eight weeks (instead of the usual four to five months) to design Dior’s Fall 2012 collection.

Simons accepted the challenge, and showed 54 different designs that earned critical acclaim. DiorMag called the show “a manifesto … a total redefinition of haute couture, of all it is, and all it stands for.”

Simons began his career in furniture design, but changed direction after seeing his first fashion show: fellow Belgian designer Martin Margiela’s Paris Fashion Week show in 1991. He launched his own menswear label  in 1995, then transitioned to womenswear, becoming Jill Sanders’ creative director in 2005.

Although Simons seemed an unlikely choice for Dior at first (his minimal, youthful aesthetic didn’t quite match up with the French house’s fanciful designs), he has fully embraced his new position and Dior’s rich heritage.

Dior et Moi was written and directed by Frédéric Tcheng, whose past projects have included the popular fashion documentaries Diana Vreeland: The Eye Has to Travel and Valentino: The Last Emperor. Similar to the Valentino film, Dior et Moi is a behind-the-scenes look at the creative process in fashion design, with plenty of attention given to the designer’s team of collaborators and seamstresses.

The film debuts on April 17th at the Tribeca Film Festival.