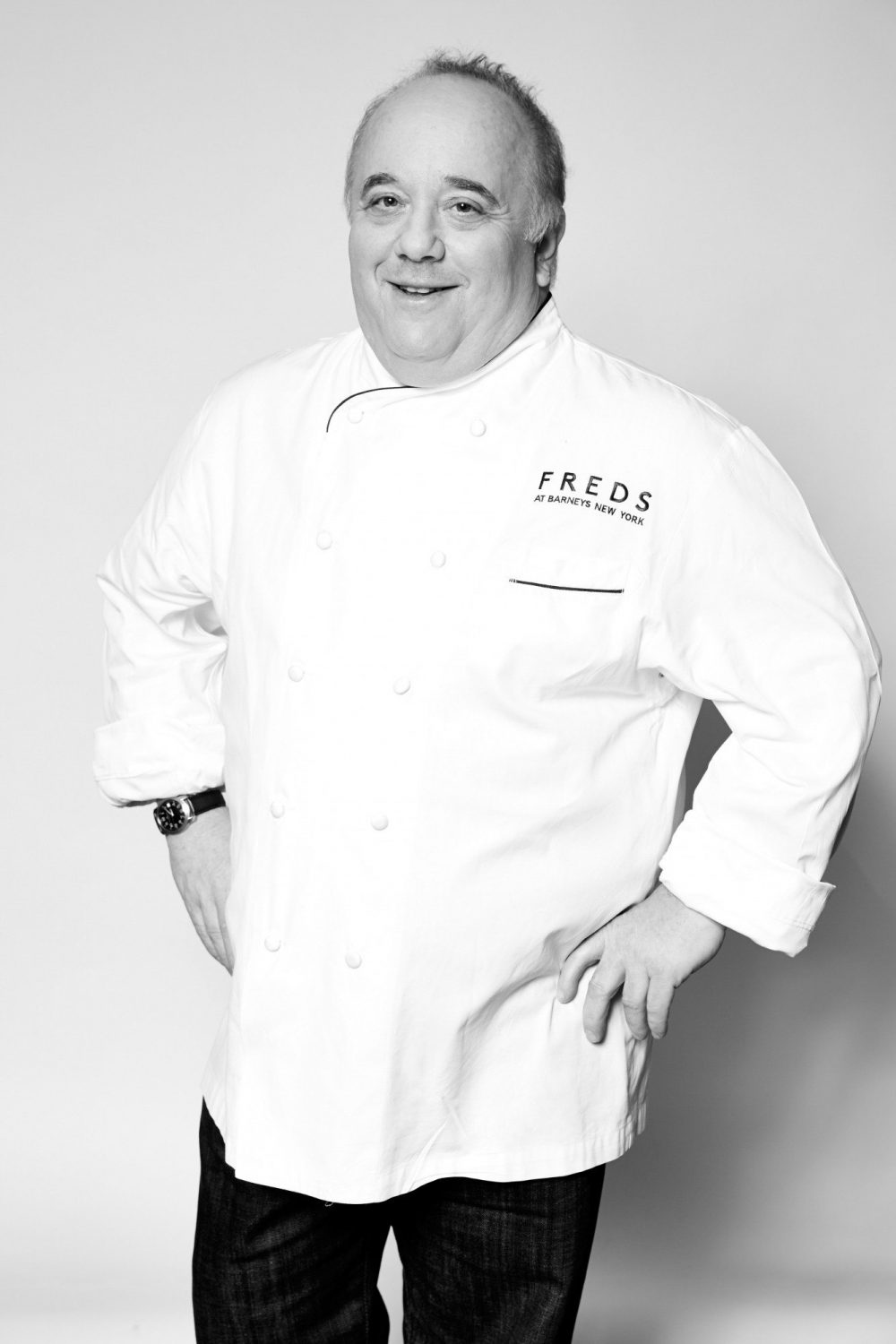 A veteran of Barneys New York for two decades, Chef Mark Strausman has overseen the openings of Freds Madison Avenue, Chicago, Beverly Hills, and most recently, Chelsea. He is a native New Yorker — he grew up in Queens — and his Barneys roots predate his tenure in the Freds kitchen; he purchased his bar mitzvah suit at the original Barneys New York, a location which the new Chelsea flagship store now occupies.

Prior to working with Barneys in the United States, Chef Mark trained abroad at Germany’s Grandhotel Hessischer Hof, Switzerland’s Le Montreux Palace, and Amsterdam’s Amstel Hotel. He returned to New York in the 1980s, becoming the Executive Chef at the Hamptons’ Sapore di Mare. Next, he opened Campagna in the Flatiron District in 1994.

Campagna led to working with Barneys New York and Freds. On Jun. 28, Freds’ Chelsea restaurant extended its hours and menu, in addition to starting to serving liquor; previously it had only served lunch between 11:00 AM and 7:00 PM. Freds is famous for its bagels, which Chef Mark has been known to demonstrate the making of. Mark caught up with Downtown to talk about Freds and plenty more.

For more information on Freds, click on over to www.barneys.com/freds. Barneys New York is on Twitter via the handle @BarneysNY, while Mark is on there as @MarkStrausman. Mark can be tracked via his WordPress site and also has cookbooks available via Amazon.

How would you describe Freds to someone who has not yet been there? Is there a way to describe the cuisine?

Mark Strausman: Freds is the perfect example of a restaurant that has something for everyone. It’s classical and trend-oriented, but not trendy. It’s intimate and a local neighborhood restaurant, but also a renowned destination.

How does the New York restaurant compare to that of other locations?

MS: I view the different Freds locations the way I view my children. They come from the same family, but each one has its own individual personality and preferences. I tailor the menus in each location to the tastes of the locals, so in New York we make bagels and bialys, we do a special Passover menu. We also do special items for Christmas in New York, which is a little different from the other locations.

I see that there are bagels on your menu. It’s often said that bagels are only good in New York and New Jersey. Any idea why that is?

MS: I’ve never heard that the bagels are good in New Jersey, but that’s where I buy my bagel boards for baking, so maybe there’s some truth to that. People say it’s the water, but I think it’s more who’s making the bagels. There’s a tradition of bagel-making in New York that doesn’t exist elsewhere.

What is your favorite item on the Freds dinner menu?

MS: No one has a favorite child. I like it all.

What can you tell me about the dinner menu?

MS: I aim to create a menu that uses the finest quality, local ingredients but in dishes that people can eat every day, not just on celebratory occasions. The dinner menu is very neighborhood-oriented, meaning there’s something for everyone and it’s food that’s light enough that you can eat it every day,

What is the biggest challenge of running an establishment like Freds?

MS: Keeping the energy up every day, so that even after 20 years, each day feels fresh.

What was your first job within the hospitality world?

MS: I sold peanuts at Shea Stadium when I was a teenager.

What was it that inspired you to work with food in the first place?

MS: As a teenager I complained about my Mom’s cooking, so she suggested I do it. It turned out that I had a talent for it and I really enjoyed shopping and cooking for the family.

Word is that you got your bar mitzvah suit at Barneys. Was that where a lot of your clothing came from as a child? Or was that a favorite of your family for special occasions?

MS: Like a lot of people of my generation, it was a destination for special occasions.

All these years later in your career, what is it that keeps you based in New York City?

MS: I was born here, my family is here, and it’s has become one of the culinary capitals of the world. Why should I leave?

Makes sense. So when you’re not busy with your career, how do you like to spend your free time?

MS: Watching competitive sports of any kind, including the Scripps National Spelling Bee, which was recently on ESPN.

Finally, Mark, any last words for the kids?

MS: Shave, hide the tattoos, and please, God, put sound-proofing in your restaurants! But I love you.