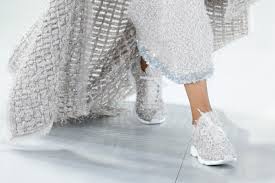 Karl Lagerfeld, who has designed for Chanel for four decades, chose custom made Massaro sneakers for the fashion house’s Haute Couture Spring-Summer 2014 show in Paris. The models jogged down the stairs and trotted around in light pink, blue, and white tennis shoes, embroidered, wrapped in tulle and chiffon, and adorned with sequins. Mr. Lagerfeld told NYT, “You can be in fashion without being a victim.” Lagerfeld still kept to his usual black attire with a pair of snakeskin boots; “For myself, I don’t do sneakers,” he said.

Each pair took an approximate 30 hours to make, and are expected to retail around 3,000 euros. They were paired with floaty, ethereal dresses, corsets, knee and elbow pads, and even a few fanny packs. As usual, Mr. Lagerfeld wowed with his ability to honor Coco Chanel’s vision while making a fresh, modern statement.