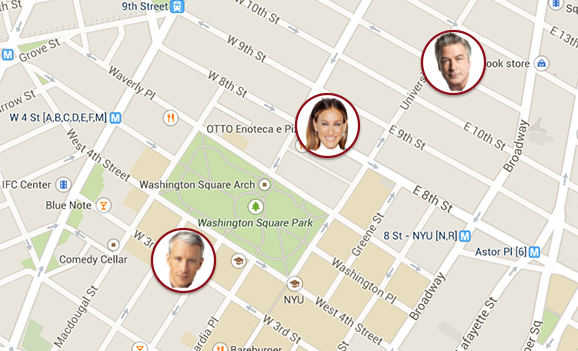 New York City is filled with stars, and many of them reside right here in Lower Manhattan. Check out our favorite celebrities living downtown and why we love ‘em, part two. Click here for part one of this series.

Alec Baldwin
Where: Greenwich Village
Why We Love Him: You may know him as the über-conservative, hard-nosed television executive in Tina Fey’s 30 Rock, but in reality Alec Baldwin is one of Lower Manhattan’s favorite philanthropists. Baldwin contributes to a slew of charities, including People For the American Way (PFAW), Coalition for the Homeless, and People for the Ethical Treatment of Animals (PETA). At the end of a long day in front of the camera or behind the next big movement, Alec looks for the comfort of home in Greenwich Village.

Anderson Cooper
Where: Greenwich Village
Why We Love Him: This television personality never hesitates to report the hard-hitting news, even if it means rocking the boat a bit. Anderson Cooper has traveled to the epicenter of global conflict and put his life in danger, all in the name of the news. His dedication to in-depth coverage is honorable, to say the least. Plus, he’s not too hard on the eyes. Stay safe Anderson, we want you returning back to Downtown Manhattan in one piece.

Sarah Jessica Parker
Where: Greenwich Village
Why We Love Her: Sarah Jessica Parker is quite the Manhattan socialite, both on and off screen. Best known for her portrayal of sex columnist Carrie Bradshaw in HBO’s Sex and the City, this Golden Globe winner has served as the UNICEF spokeswoman in 1998, 2003 and 2006. Parker is also one of Downtown’s best dressed, and she’s passing along her unique style to her three children.

Alicia Keys
Where: SoHo
Why We Love Her: Talented, beautiful, and smart? This Girl on Fire belongs Downtown, but Keys is more than just a platinum pop artist. She’s also the ambassador for Keep a Child Alive, an organization that assists the fight against AIDS by providing life-saving treatment to infected children and their families. Her efforts have taken her around the world, to Africa and beyond, but at the end of her travels she always returns to her Lower Manhattan home.

John Legend
Where: SoHo
Why We Love Him: John Legend brings style to SoHo. He’s calm, cool, and super talented. Legend is a philanthropist, a Grammy-winning platinum artist, a UPenn grad, and most importantly, a resident of Downtown Manhattan. In 2008, he established the Show Me Campaign, which fights poverty by stimulating social, economic, personal and educational growth in underprivileged African villages. He also works to promote education reform in order to give all children equal opportunity to succeed. We’re glad John Legend can call Downtown his home.

Chase Crawford
Where: Financial District
Why We Love Him: On television he played one of Manhattan’s most wealthy teens. Off the screen, he’s a national heartthrob, but there’s more to this Gossip Girl pretty boy than good genes…he also has good jeans. In 2007, Crawford partnered with Do Something and Aeropostale to encourage teens to donate old jeans to the homeless. He understands that not everybody can live the scandalous life of Manhattan’s elite, and he works to give back to his Downtown neighbors.

Sacha Baron Cohen
Where: Financial District
Why We Love Him: Political correctness means nothing to Sacha Baron Cohen, and we like it that way. Cohen’s humorous characters always keep us laughing, while also broadcasting (rather obscenely, at times) important social commentary. Whether he’s Ali G, Borat, or Bruno, we’re glad this comedy king brings his ‘sexy time’ Downtown.

Tyra Banks
Where: Financial District
Why We Love Her: This supermodel is always on point. From the start, Tyra Banks has promoted self-love; she owned the runway despite being roughly 30 pounds curvier than her swimwear model counterparts. Today, Tyra’s classic style, charismatic charm, and powerful presence make her a force to be reckoned with. Banks has done it all: modeled, produced, published, and more. After working her way to the top, Tyra Banks has made her way back down to FiDi.