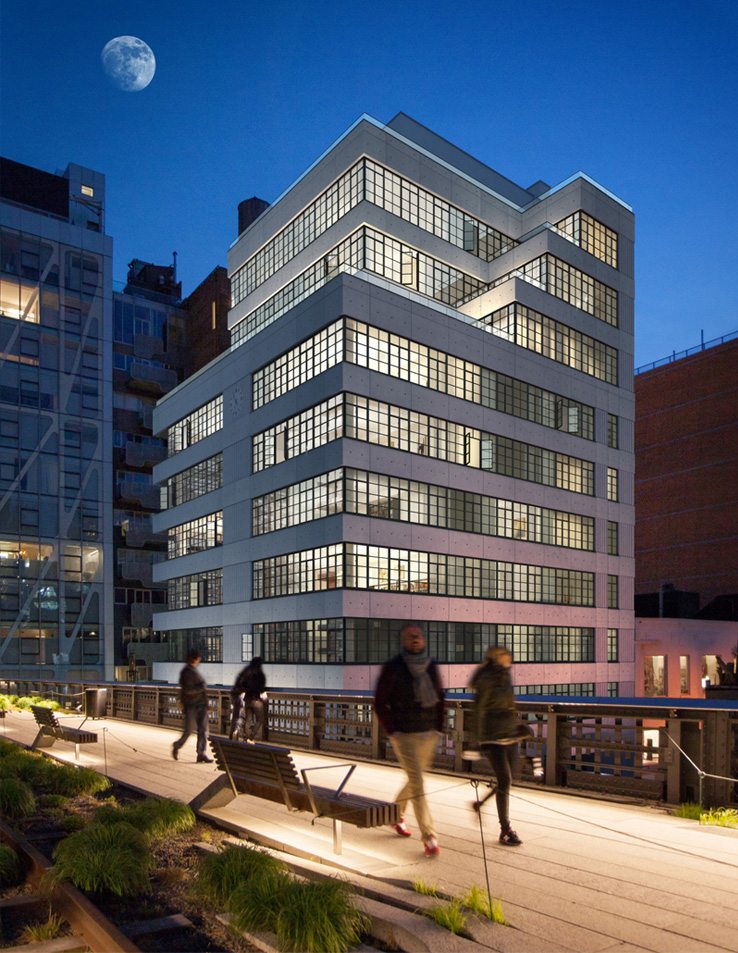 Situated on the High Line in West Chelsea at West 24th Street, you can’t help but notice a large modern-looking concrete building with large, industrial windows.  It is one of the latest residences to make a splash onto the downtown real estate scene.

508 West 24th St., constructed by Tamarkin Co. and led by developer and architect Cary Tamarkin, is an architectural marvel with 10 stories and 15 residences.  The condominium opened during the fall of last year, and the building recently sold its last residence.  According to Tamarkin, the building is mainly comprised of three-bedroom residences that range from 2,000 to over 3,300 square feet.  Each residence has 10-foot high ceilings, white oak floors and custom walnut and marble kitchens.  Over half the residences also offer a private outdoor space.

When asked if he considers his style contemporary, Tamarkin is quick to define what contemporary means to him.

“Contemporary to me means modern today. And that implies to me stuff I don’t like.  I would say [my style] is classic, modern architecture inspired by the ’30s, ’40s, ’50s and ’60s. Like the guys I really look up to.”

Some of Tamarkin’s inspirations include Marcel Breuer, Corbusier and Louie Kahn, all of whom are influential figures in the world of architecture and design.

Among the unique features of the development, besides it being on the High Line, is that the entire building is made out of cast concrete, which Tamarkin says is a departure from the materials he usually uses.

“The building is made of casting place concrete, which, as far as I can think of, has not been done at all in the city in like 50 years, so that’s pretty cool,” Tamarkin says. “That’s the first time I ever did that, most of our buildings are brick and steel windows…but it’s a material I’m definitely interested in.”

Part of his inspiration to use concrete for the residence came from the surrounding buildings in the area.

“Directly to the south of us is HL23, which is a very interesting building…it’s this curving, dancing, well done thing…and then there’s another building that’s metal, thin metal and dancing going to the north of us,” Tamarkin explains. “So rather compete with those, this is sort of the opposite…I just wanted to build a rock and concrete was the heaviest thing I could think of…so I wanted to make that statement and anchor that whole zone.”

One of the main challenges of the project was working with the material, which Tamarkin explains as being really tricky to line up, as well as evaluating the quality of the concrete.  Tamarkin met with consultants to go over the different mock-ups of the concrete, to get the the quality, color and consistency of it just right.

“There were these great concrete consultants that work for IMP…and some people have really mastered the art of concrete, but it also does what it wants to do,” Tamarkin says. “It’s like you’re wrestling with it, as opposed to bricks where you’re laying them one-by-one.”

Though it was a challenge, Tamarkin is definitely open to working with concrete again as a material. For his most recent upcoming projects, however, concrete as the main building material will be put on hold. Tamarkin is working on another downtown residence at 550 West 29th St., which he says will be a 65,000-square-foot residence with 20-foot high ceilings in every loft.  Additionally, his firm also purchased a building at West End Avenue at 87th Street that will be undergoing a renovation with 14-foot high ceilings on every floor, a penthouse and 10-foot high windows.

Tamarkin estimates that the building at 29th Street will be completed in a year and a half, and the building on West End will be done in three years.