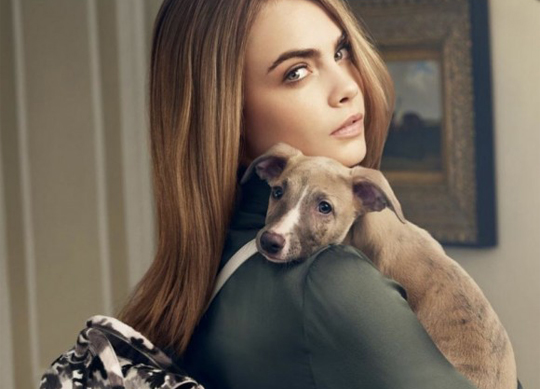 After months of anticipation, Cara Delevingne has finally released photos from her personal Mulberry Bag Collection. The 21 year-old British model collaborated with Mulberry to create her first personal three-in-one carry-all bag collection. Mulberry’s last celebrity collaboration was two years ago, when they teamed up with the chart-topping singer Lana Del Rey. Though identical in style, Delevingne’s bags come in three sizes (mini, medium, and large) and in seventeen different colors and fabrics. The bottom of each bag reads ‘Made in England,’ a duplicate of the stamp tattooed on the bottom of Delevingne’s foot. The bags feature two handles and Mulberry’s signature golden lock in front; you can choose whether you want to carry the bag as a backpack, a tote, or over the shoulder. A special edition Mulberry bag displays a heart-shaped patch and a lion rivet, both based on Cara’s tattoos. Delevingne’s photo shoot and launch was set in the Royal Suite of Claridge’s Hotel during London’s Fashion Week back in February. The big secret is finally available to the public and the pictures are utterly gorgeous. Fans of Delevingne were surprised to find that Cara’s peculiar style has been put aside to let in a more classic and elegant look, accompanied by some adorable animals. Of course, words can only go so far. We’ll let the photos from the shoot do the rest of the talking.