Simplicity Scores in Buyer and Cellar 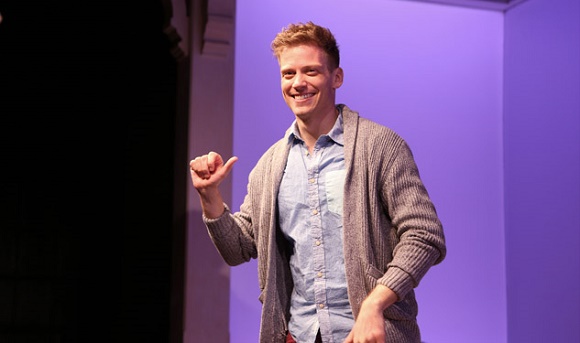 A normal stage production has numerous elements to break down; set design, lighting, casting, and dialogue are just a few examples subject to scrutiny when attempting stage perfection. But what if a whole production relied on the performance of just one actor; one person to convey an entire play’s worth of ideas?

Buyer and Cellar takes on this challenge, and as New York’s longest running comedy, it proves that one person can man the stage alone and deliver a caliber show with minimal effects. The production tells the story of Alex Moore, a struggling actor who takes on the most unique role of his life: working a sales floor located in the basement of Hollywood legend, Barbra Streisand.

The starlet transformed the basement of her Malibu home into a shopping center with fixtures like an antique store, a clothing outlet, and a frozen yogurt shop. The story of Buyer and Cellar is fictional, but Barb’s basement mall actually exists, and is documented in her book My Passion for Design.

Barrett Foa is currently portraying Alex Moore in the production, and he said the role has been a blast to play, but the stamina required for a 100 minute monologue comes with a price.

“It’s a little bit lonelier than I anticipated,” Foa said. “But when you’re up on stage it doesn’t feel that lonely because you’re playing all of these different characters and I almost feel like they’re all on stage with me.”

Foa replaced Michael Urie, the production’s original lead who recently performed the role for the 400th time and is currently leading a national tour of Buyer and Cellar. Foa will lead the New York performances until its final show on July 27, 2014.

Foa’s loneliness is reflective of the job Alex takes on in the play. When he reports to his first day of work, the basement mall is populated only by the dolls in the antique shop, until one day Barbra finally comes down to relish in her unique creation. After a hilarious negotiation over the price of one of those dolls, they strike up a friendship that carries the story forward. Alex begins to unravel the challenges he’s facing in life, and we get to know the real Barbara beyond her celebrity facade.

On stage, Foa portrays every character: leading man Alex; Streisand through a well-executed Babs impression; and 5 more characters who he meets along the way. Foa faults on a few lines during the productions 100 minute duration, but his conviction never wavers. He said the imperfections can often benefit the performance; Foa explained that by constantly breaking the fourth wall and narrating what his character is going through whilst going through it, he builds a relationship with the audience that permeates throughout the performance.

“I’m not some automaton, I’m a human actor and [they’re] a human audience,” Foa said. “We get to have that kind of relationship. It’s flawed and that makes it interesting being a little bit messy, and not clean and perfect, and sterile.”

Buyer and Cellar illustrates the power of celebrity through concurrent stories of one person’s ailing aspirations of fame, and another’s distress due to the distinguished popularity of being Hollywood’s sweetheart. Both stories are told with sincerity through the eyes of one man in Barbra’s artificial utopia. However, the illustrious environment is up to the audience to imagine since all they can see is Alex in his one room basement apartment, and the only tool at their disposal is his descriptive dramatization and conviction.