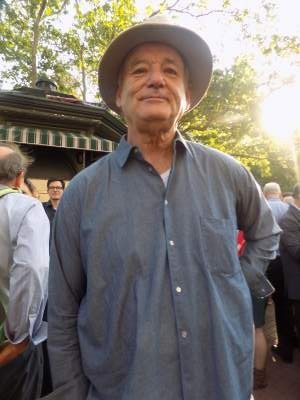 Actor Bill Murray led a group of poets and poetry enthusiasts across the Brooklyn Bridge for the 20th Annual Poets House Bridge Walk.

The Poets House Bridge Walk is a tradition which consists of reading New York-inspired poetry across scenic locations on the Brooklyn Bridge, and stopping for wining and dining on the other side. It is a yearly fundraiser for the free Poets House cultural activities which take place throughout the year. The tradition dates back to the Poets House founder poets, Stanley Kunitz and Elizabeth Kray. Kray had a knack for putting on poetry walks and put one particular walk together to celebrate the Brooklyn Bridge. The modern walk is now done in her honor.

Each poem read was both New York centric and celebrated the city.

The beginnings of the walk. Photo courtesy of Laura Seaman

“This is one of those great events that attracts people who are not even necessarily into poetry. Because we read poems about the city in the places they are about,” said Poets House executive director, Lee Briccetti.

The Poet’s House champions the importance of the arts and art programs in everyday life.

“The arts are not a luxury,” said Briccetti. “The arts give us a way to find each other. To develop empathy for each other. To feel our own sense of connection to the whole universe. And to me that’s part of social justice”.

The walk began on the Manhattan side of the bridge near where Bill Murray first filmed Ghost Busters, which he admitted he still watches “two times a week.” Following a speech by downtown Councilwoman, Margaret Chin, the walk began with poems by children from PS 1. The kids’ poems ranged from topics including PS 1 being haunted because they only use five of six floors, a reflection on various locations in New York, and a dialogue between the Brooklyn and Manhattan bridges.

“Manhattan Bridge. Your blue is ugly,” said one young poet in-character as the Brooklyn bridge.

“Well I don’t want to sound too much like a poet, but I find that this particular event is really…it touches people,” said Murray. “Just marching across the bridge, and hearing these poems, if you just went so far as hearing them on the other side it would change you. Change your day, change your week. No, it would change all of you. It has an effect. They’re powerful words. They’re written by professionals, they’re designed to touch you.”