Ben Hope Reflects As Curtain Closes on Once 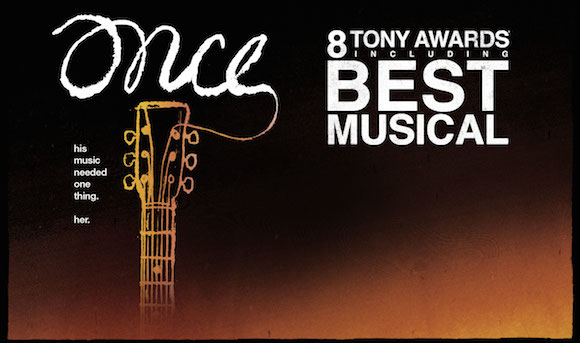 Broadway celebrates and says farewell to ONCE on Tuesday, January 6th. The night started with a set from Ben Hope and the “Uptown Outfit,” and concluded with songs from ONCE, preformed by the beloved original cast. Ben Hope, the standby for “Guy” for three years running, played with his band the “Uptown Outfit” to start the show off right. The audience then enjoyed performances by original cast members, “Guy,” Paul Alexander Nolan, and “Girl,” Jessie Fischer. This was a night to remember for a Tony Award-winning Broadway musical production that touched the hearts of many. Before the event started DOWNTOWN was able to interview Ben Hope about his acting and musical career.

DOWNTOWN: What made you move from Alabama to NYC?

BH: I got the idea of moving to Manhattan ultimately because of my passion for theatre. In 2005, I finished up at the Flat Rock Playhouse in North Carolina. My plan was to move back home and figure out the next step. A few days later my friend called me to tell me he had a room open up at his place in NYC. I figured that I wanted to go eventually, so why not go now? It was a spontaneous, but good decision.

DOWNTOWN: What was your musical experience like in Alabama?

BH: I played mainly with my brother and father, they taught me the ropes. I had a band with my buddies in high school, but looking back on it I’m not sure we were all that great. We sort of peaked at our first gig for Miss Hoover High School, which was awesome, there were 4,000 students that attended the high school. We also played at the Alabama Theatre, which is a big venue.

DOWNTOWN: Who are your favorite country artists?

BH: My all time favorite country artist is Garth Brooks. He’s a member of a group of artists called, “The Class of ’89,” the artists who cranked up the Rock ’n Roll side of country and brought it to the forefront.

BH: I am not completely familiar with modern country artists. I currently follow Hayes Carll, he is a great song writer with an awesome gravely voice.

DOWNTOWN: What is the best country song of all time?

BH: Of all time? That’s tough, I don’t think I could pick just one. I would probably say, “Lost Highway” by Hank Williams, “Much Too Young to Feel This Old” by Garth Brooks, or “Grand Tour” by George Jones.

DOWNTOWN: Do you prefer acting over music?

BH: Luckily, I have a degree in musical theatre, so I can combine the two. My theatre career is at a good level, so for now, I am putting it on back burner to focus on music. My goal is to get the band to a place that matches the level of my theatre career. Most of the band is made up of actors, which makes it hard to stay together due to the high demand.

DOWNTOWN: What was your experience with “ONCE”?

BH: It was a dream come true. This was one of the most talented groups of people I have worked with. Everyone was so easy to be around, we appreciated each other on and off stage. We are still all so in love with each other. The last three years working and performing together has made us into a family, it was truly a life-changing experience. It was a higher level of work than I was used to, which created a steady comfort in my life. I was able to get married and live more like an adult than I had before.

DOWNTOWN: What sets “ONCE” aside from other shows?

BH: “ONCE” has a pre-show, which makes it a unique production. It made the story that we melted into relatable for our audience. They could interact with us and then trust us as musicians and actors. This aspect really made for a special night.

DOWNTOWN: Did you have any interesting interactions with audience members during the pre-show?

BH: One thing I will always remember about the pre-show was when DP Kelly would dance with audience members. It was funny to see how they would react. Personally, I found in strange when my mother would come on stage during a pre-show. I would be interacting with audience members that I didn’t know and then be like, “Hey Mom!”

DOWNTOWN: Would your family come to a lot of your shows?

BH: Yes, my family is extremely supportive. If they didn’t live in Alabama they would be at every show. Otherwise, they work very hard to be present.

DOWNTOWN: How long has your band been together?

BH:“Uptown Outfit” has been playing together for five years. Tonight, we have three original members, which is very rare with how hectic all of our careers are. We have a new drummer and base player, who are both awesome.

BH: We play everywhere, we try to spread love to all the boroughs. We play in the East Village, Queens, and Brooklyn. We haven’t played in Staten Island yet, but we are considering it for the future. As a band, we haven’t left the city, but we plan to hit the road late this summer or early this fall.

DOWNTOWN: What are your favorite places in downtown Manhattan?

BH: That’s tough, downtown has a lot to offer. I love the dessert/restaurant bar, Milk. My favorite dessert on the menu is cereal milk ice cream, it tastes exactly like the sugary milk at the end of a bowl of cereal. I am also a big fan of Momofuku, right across the street from Milk.

DOWNTOWN: What is the ideal venue to preform at?

BH: We played at Hank’s Saloon, in Brooklyn. It’s an awesome place, and attracts a crowd that is very fond of our music and country vibes. As a band, we are still kind of learning the best places to play. We have gotten way more love for our music in Manhattan and Queens than expected, since our music genre isn’t the most popular in this area. In the future, we would love to play at Skinny Dennis, in Brooklyn. It fits the dive-bar vibe that we give off as a band. In ten years, we hope to go big, hopefully ending up playing at the Garden.