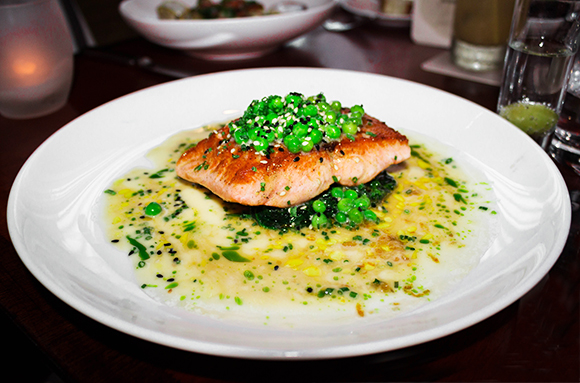 Downtown Manhattan is, once again, lucky enough to receive another dining venture from the restaurant and development company HPH, headed by restaurateur Peter Poulakakos–Bacchanal.

DOWNTOWN was invited to experience the wine-driven, energetic restaurant, touting humble Executive Chef Scott Bryan’s soulful cuisine. Pulling up to the corner of Bowery and Broome St., in an offbeat location in Little Italy, we find Bacchanal resting at the base of the Sohotel. Inside, the restaurant has an open concept layout, allowing guests to be a part of the food-making process with full view of the kitchen and chef. A sprawling wooden bar serves as the focal point of the dining area, reflecting the centrality of wine and cocktails in relation to the cuisine, highlighting the spirit of Bacchanalia from which the restaurant’s name derives.

With the arrival of our appetizers–grilled Spanish octopus, crisp sweet breads, and hamachi crudo– a fresh batch of cocktails arrived. The Bacchanalia, a sangria-inspired mixed drink, and the passion fruit infused cocktail named The Mitch” expertly enhanced the flavors of the fresh ingredients comprising our initial serving.

For our main course, we were served the Chef’s most notable dishes: roasted farm chicken over polenta, grilled skirt steak with black beans tinge, atlantic codfish with manila clams, and scottish salmon in a ginger soy vinaigrette. Each dish was presented in a clean, refined manner with each bite boasting the same qualities.

The meal was capped off with dessert cocktails, the minty Grasshopper, an espresso and scotch whiskey Talisman, and the Tiramisu. A peach tarte tatin, flourless chocolate cake, and vanilla panna cotta were also apportioned, boasting delicate sapors that left the guest feeling light and not saturated in too many competitive flavors.

During the meal, Peter Poulakakos and David Oz sat down to briefly discuss the vision behind Bacchanal. Realizing the growing residential population in Lower Manhattan, Paulokakos and Oz decided to create a restaurant that reflected the downtown vibe–an unpretentious, progressive environment, embodying the New York spirit. Poulakakos affirmed the impetus behind the Bacchanal vision, “We want to be a part of New York and make New Yorkers feel comfortable. No pretension.” This standard is visible throughout the restaurant, from the food, beverages, employees, and clientele, to the decor. Oz added, “We want to excel in all aspects: staff, food, environment. It all has to be more than food.”

And more than food it is. The quality of the Bacchanal experience lays in the laid-back appeal that is inclusive and inviting. One can relish in the food and drink without feeling overwhelmed or restricted by ostentation. Such modesty is what lead the co-owners to select Chef Scott as their culinary head, as he eschews the celebrity of chefdom, preferring to speak through his food.

After basking in the restaurant’s relaxed environment and savoring our candid meal, DOWNTOWN grasps what Chef Scott is trying to communicate via his cuisine: it’s a pleasure to revel in Bacchanal.