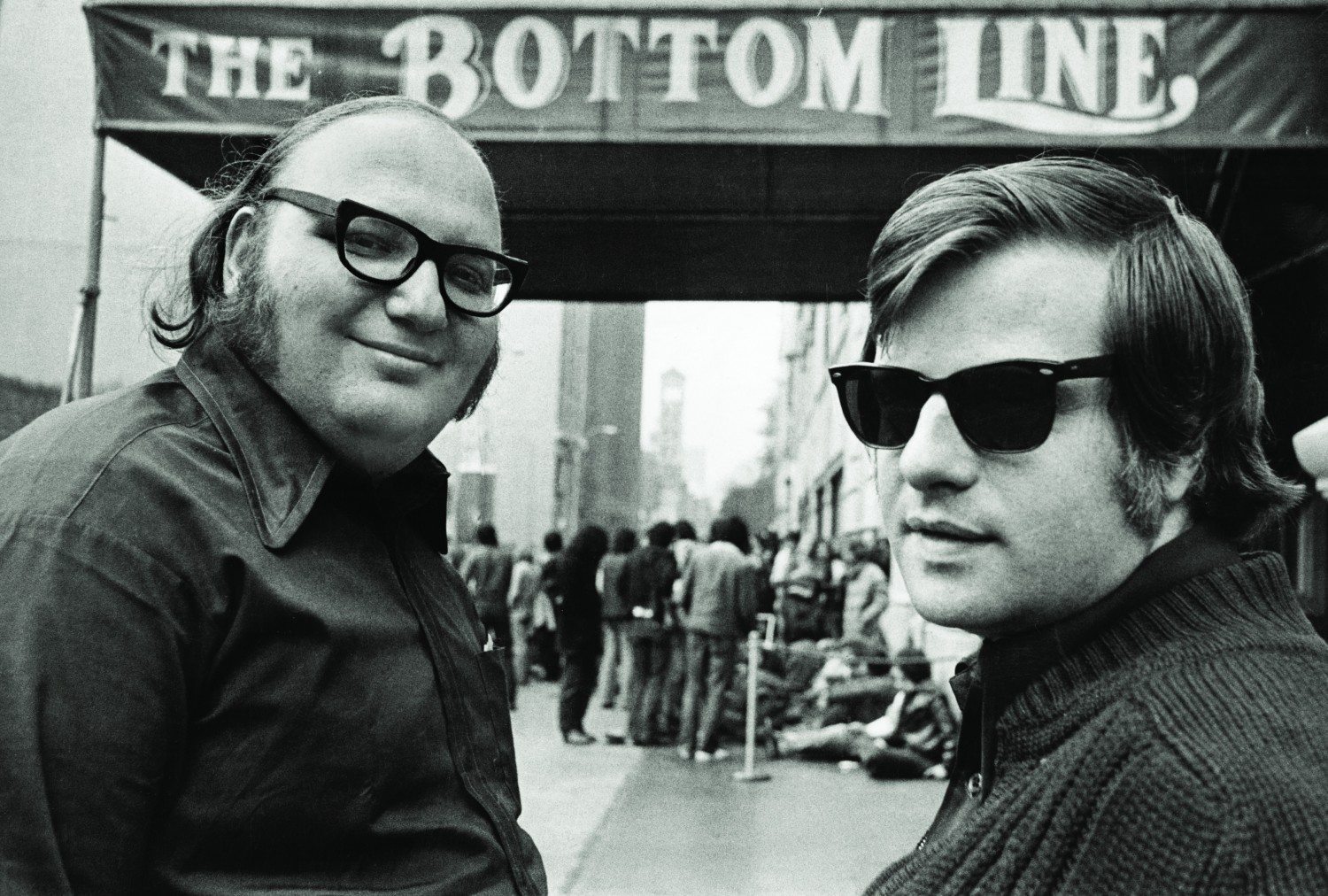 Located at 15 West 4th St., The Bottom Line was a prominent music venue opened by Allan Pepper and Stanley Snadowsky in February 1974. Bruce Springsteen played there on the Born To Run tour, among other gigs. Lou Reed recorded his Live: Take No Prisoners album there. Harry Chapin chose to play there for his celebrated 2,000th concert. Prince, Hall & Oates, Eric Clapton, Van Morrison, The Ramones, Miles Davis, Billy Joel, Peter Gabriel and Cheech & Chong are among the other legends that played at The Bottom Line.

The venue closed in January 2004 as a result of its landlord, NYU, continuing to raise its rent. However, Allan Pepper continues to keep the legacy of The Bottom Line alive in a variety of ways. First, he has an album series called The Bottom Live Archives, which has released 10 titles as of this article’s posting. Tony Orlando, Doc Watson, and Pete Seeger with Roger McGuinn are the series’ latest three releases. Second, Allan has been working on a book about The Bottom Line, as likely to include photos never before seen. Third, per my Q&A with Allan, never say never on the venue re-opening.

Allan kindly answered some questions for Downtown over e-mail, discussing the past, present and future of The Bottom Line. For more info on upcoming titles for the Bottom Live Archives, click on over to www.bottomlinearchive.com.

L to R, partners Stanley Snadowsky and Allan Pepper in front of “The Bottom Line” in 1975.
CREDIT: Peter Cunningham

Do you feel that the legacy of The Bottom Line is where it should be?

Allan Pepper: Well, I know that The Bottom Line has a place in music history and pop culture.  And I know that for the thirty years of its existence, we affected the lives of millions of people on every level from performers and their fans, to employees, to the industry people who did business there, and of course to the invaluable customers who walked through those doors. 11 years after we closed, we continue to hear from those people on a weekly, if not daily, basis. In fact, with the release of The Bottom Line Archive series of live performances, I’m touched by the great response we’ve had.

What did The Bottom Line offer that other venues did not?

A: The Bottom Line had a much larger stage than most clubs and a tech crew of six people, which was unheard of in 1974. Most clubs had just one person who did both sound and lights. The sound system was state-of-the-art and we provided on stage monitors so the band [members] could hear each other. There were two dressing rooms behind the stage so an artist didn’t have to pass through the audience to gain access to the stage. And as a bonus, both dressing rooms had their own bathrooms!

As the story goes, Bruce Springsteen offered pay the club’s back rent owed. Why do you think he was so willing to help keep the club open?

A: It was actually Sirius Satellite Radio that put the entire amount owed in an escrow account to go directly to NYU on the condition that they gave us a new ten-year lease.  Bruce separately offered $100,000 towards the club’s back rent if it would help to keep the club open. I think Bruce made the gesture because he appreciated how important the club had been to his career, and it was his way of paying it forward so it could be there for someone else. Bruce’s generous offer meant a great deal to my partner Stanley and myself.

Your three latest releases in the series include performances by Tony Orlando, Doc Watson, and Pete Seeger and Roger McGuinn. Do you have a target goal as to how many releases you’re going to put out?

A: Since the end of March, we have now released a total of ten titles. The other seven shows include Willie Nile, The Brecker Brothers, Kenny Rankin, Harry Chapin, Janis Ian and two volumes of In Their Own Words, the songwriters series which was a staple of The Bottom Line. We’re hoping to release fourteen titles in 2016.

Are there plans to put out other albums beyond live releases as you had done with Bottom Line Records?

A: At this point we are only talking about releasing shows that were recorded at the club from 1974 to 2004, and as you can imagine, we have a huge reservoir to draw from.

Do you have an all-time favorite performance that you witnessed firsthand at The Bottom Line?

A: It might surprise you to know that after 30 years and thousands of shows there is no all-time favorite performance. However, there are certain nights and shows that I will never forget. This is not a definitive list, but a baker’s dozen of shows that I still think about: Dr. John opening night Feb. 12, 1974, Bruce Springsteen Born To Run Tour August 1975, The Be Stiff Tour, every David Bromberg show, Lou Reed, [the first production of] Leader Of The Pack January 1984, Doc Watson, Sonny Rollins, Barenaked Ladies, Dolly Parton, In Their Own Words, every Downtown Messiah performance, and A Christmas Gift For You December 1988.

What is your favorite venue in Manhattan to see a show at?

A: I live in New Jersey and don’t get into Manhattan that often. Currently, I don’t have a venue of choice.

Is there anyone you haven’t seen in concert that you still hope to one day?

A: The only artist that I wanted to see in concert that I never got a chance to is Frank Sinatra.

Do you think you’ll ever get back into the concert venue business again?

A: I have not closed the door on reopening The Bottom Line. But I wouldn’t seriously entertain the thought unless the finances were available and committed.

In your eyes, what is the biggest challenge for a concert promoter these days?

A: There are two challenges that every concert promoter must navigate. First, keep your fixed costs as low as possible. Second is to negotiate a fair and equitable deal with the artist’s representative. What makes this tricky is the definition of fair and equitable is vastly different, depending on whether you are the promoter or the agent.

A: No favorite album, but some favorite songs: “Will Anybody Know That I Was Here” by Mary Lee Kortes, “FM Radio” by Dar Williams, “My Old Neighborhood” by James Maddock, “Tired Bones” by Henry Gross, and “Caribbean Jewel” by Tony Orlando and the Lefty Brothers.

Aside from music-related work, how do you like to spend your time?

A: Most of my time is spent on projects related to The Bottom Line. Between Bottom Line Archives and talking to publishers about a book about The Bottom Line, there’s not a lot of free time. However, the way I relax is usually spent reading. And like my musical preferences, my literary choices are eclectic.

Finally, Allan, any last words for the kids?

A: Don’t wait for opportunity to knock on your door, jump right in! Try to find an entry-level job in an area that interests you — i.e. a record company, booking talent, recording studio, concert promotion. If you can’t find an opportunity, create your own — try to get your friends’ band a gig with a local promoter, try and help a band manage their social media, find a bar or a restaurant that has as slow night and see if you can interest the owner in booking some music shows to help on attendance on those nights.

Two easy rules to remember…Number one, there is not a job that you won’t make a contact at that will be useful to you in the future. This is a business of networking and contacts and those contacts are priceless. Rule two, don’t ignore someone because you don’t think they are important enough. The person you blow off today will be the person years from now running a major talent agency or the new hot record label in town.