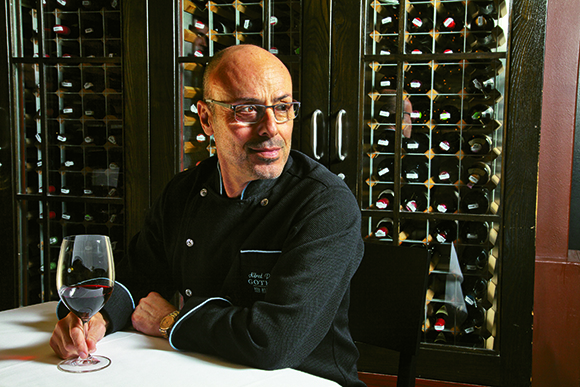 Alfred Portale has built a reputation of excellence over three decades at Gotham Bar and Grill.

The first time I ate at Gotham Bar and Grill in the 1980s, it changed the way I looked at American food. I distinctly remember the dish— a Yellowfin Tuna with a Pinot Noir sauce and Gigante beans—and it was refined, beautifully presented and luscious. This was every bit as good as any of the Michelin restaurants I had experienced in Paris or the South of France. Then I met Chef Alfred Portale and instantly became a groupie, which is unusual for me. His dedication to sourcing the best quality ingredients, even before it was the thing to do, was apparent in every dish. Whether it was his legendary “skyscraper” seafood salad or his impeccable risottos, every dish had star quality. No one had ever seen the likes of his “architectural” presentations, a term coined by then New York Magazine restaurant critic Gael Greene. Even the simplest of dishes were transformed into works of art. This March, Gotham Bar and Grill celebrates its 30th anniversary, and among the countless accolades, the restaurant has received five three-star reviews from five different New York Times critics. This crowned jewel of New York restaurants has definitively changed the way the world looks at American food— elevating it to American cuisine.

You started your career making jewelry, what made you change to the culinary arts?
I was always interested in art. I studied drawing and painting and sculpture. The interest in jewelry came because I wanted to turn my passion into a living. A couple of years into designing jewelry, I found a copy of a French cookbook called Modern French Culinary Art, and it had magnificent color photos of grand buffets and ice sculptures and carvings. I thought, “Wow!” That’s edible art, and that’s what I want to do.

Sounds like that was your epiphany.
At the same time, I learned about the Culinary Institute, so I thought—“Hey! A school I could go to for two years and graduate a full-blown chef and be making ice carvings and these beautiful platters?—I’m in!” I just loved what I was doing at the time and fully emersed myself in it.

Was there good food in your household?
I grew up in an Italian-American home where dinner was very important. My mother was a great cook. We had big dinners and parties and she made everything and I helped her make Christmas cookies and raviolis. She canned her own tomatoes to make sauce—I have very, very good childhood memories about food.

How did your parents react when you told them you wanted to become a chef and go to cooking school?
At the time my brother was a doctor, my sister was a teacher and I was going be a chef and I think they thought…

Have they been here to eat?
Sure, many times.

They must have been very proud.
I think they didn’t want all of my early success to go to my head so they were not that outspoken, not to me anyway, but they were to friends and relatives. To me, I think they played it down hoping to keep me modest.

So you went to the Culinary Institute, you graduated at the top of your class and then what?
I moved to New York, and my goal at the time was to go to France and work in a three-star Michelin restaurant.

Which you did ultimately do.
Yes, when I was at the Culinary Institute, they were interviewing for a position that was kind of vague, but it was to work with Michel Guérard to help him open Comptoir Gourmand, so I applied, hoping that would be my ticket to France. It was an incredible experience. I learned how to cure meats and to make charcuterie, terrines, pâtés, rilletes and jambon de Paris. It was fabulous! Then after a year-and-a-half I went to France, spent half of the year with the Troisgros brothers and the other half with Guérard.

And that changed your life?
It did. When I returned to New York, my first job was at the Polo Club. There were quite a few famous people that came out of there. I was hired to replace Daniel Boulud who was the sous chef at the time but had just been hired to be the chef at the Plaza. I was there a year and I got a call from the chef at Tucano and I went there and was the sous chef for a year, and then I came to Gotham Bar and Grill in ’85.

Was that when you really emerged as a celebrity chef?
You know, in ’85 they called us American regional chefs, but our cuisine was more eclectic, borrowing from various cultures and traditions. I was excited to put all of my training to work at this magnificent restaurant, and I introduced fine dining into it without any of the stuffiness that came along with it at the time. We wanted it to be an American brasserie- style restaurant with top-quality food. [Continues]

Alfred Portale is the City Bites chef profile of DOWNTOWN’s Spring 2014 Edition. If you would like to continue reading the entire interview, you can find it in our latest issue on newsstands now!