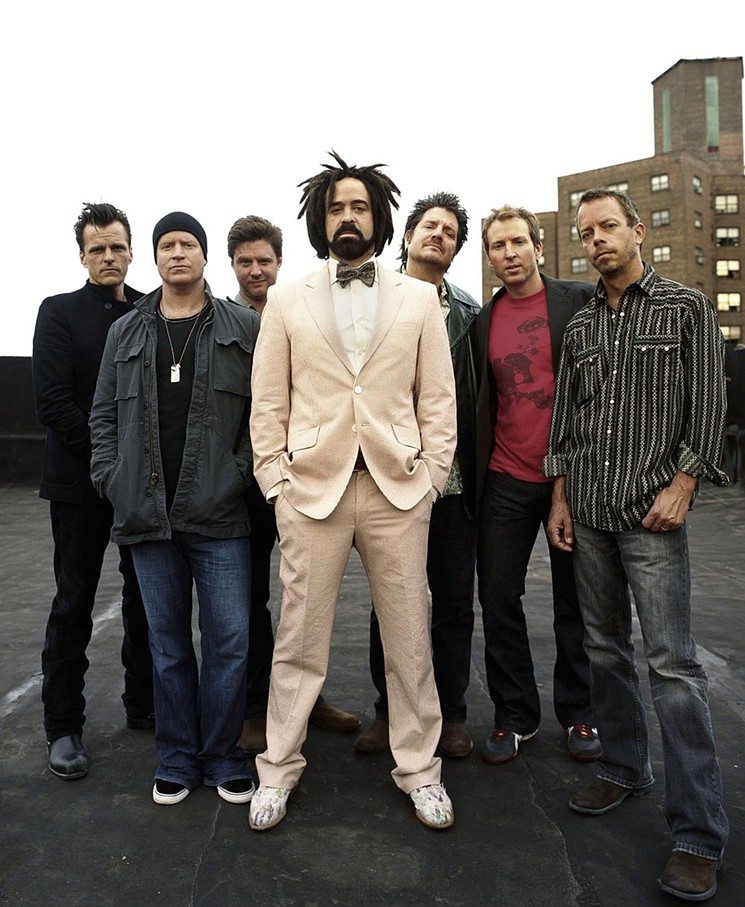 In the group’s 25-year history, Counting Crows has sold over 20 millions of albums, with more than a dozen big hit singles to its credit. Songs like “Round Here,” “Mr. Jones,” “A Long December,” “Hanginaround” and “Accidentally In love” are still playing on the radio, and Counting Crows is still playing arena and festival stages around the world. Summer 2016 brings Counting Crows on the road for a headlining tour with Rob Thomas, including a Jul. 31 stop at Jones Beach.

Adam spoke to Downtown about the upcoming Rob Thomas tour, his history with New York and plenty more. He and can be followed on Twitter via @CountingCrows, while the Counting Crows website is plenty full of exclusive videos, photos and recordings.

How did the opportunity to tour with Rob Thomas come up? Managers and agents talking? Mutual friends?

Adam Duritz: There are always a million ideas from people about summer touring. I’m sure this one comes up all the time for both of us. The difference is that this year neither of us already had other plans, so when Rob and I spoke about it, we just decided it sounded like too much fun to pass up.

AD: Personally, I don’t care all that much about indoor vs outdoor — I just really like playing, but I think people prefer to go to outdoor gigs in the summertime. That’s a good enough reason for me.

20-something years ago, Alex Chilton opened some dates for Counting Crows. Have there been any legends that you’ve wanted to open shows for the band but you weren’t able to land?

AD: No, not really. We just mostly like to tour with bands we love. I idolized Big Star growing up and they asked us to open for them at The Fillmore in San Francisco in the Spring of ’94. I knew Alex also really wanted to tour his own band and I wanted people to see my idol play so we asked him to come out that summer. It was all pretty informal. For me, it was a chance to hang out with a guy I liked who was also probably my biggest influence as a musician.

AD: I remember it was at Wetlands and we got Jeff Buckley to open for us. It was also one of the first headline gigs we ever played outside San Francisco. Luckily it was a tiny club, because I doubt many people had heard of either one of us at the time. Still, we packed the place. It was a zoo and I was fucking thrilled.

Do you have a favorite venue to play in New York?

AD: A lot of them are closed these days. I loved Tramps and Brownies and Roseland Ballroom, but they’re all gone now. I’m not even sure I ever played Tramps or Brownies except drunkenly sitting in with friends, but I saw a ton of great gigs at both places. I still really dig Central Park and Bowery Electric. The truth is any gig in New York City is still a gig in New York City, and that will always be the coolest thing in the world. I used to really dig the Beacon Theatre and I probably still would, but I blew my knee into a million pieces jumping off the drum riser there during the Recovering The Satellites Tour and it’s hard to forget that association.

Back in the 1990s, you had a great record label going with Neilson Hubbard, Joe 90 and the Gigolo Aunts on your roster. Do you look back on the days of E Pluribus Unum fondly?

AD: Hmm, yes and no. I still believe we made a pretty much perfect run of great albums on that label, but we failed to sell many of them and that was our job, so I’ll always feel like we let the bands down in that sense. I’m very proud of signing those bands and making all those records, though. I signed all three of them and I was there in the studio working on all those records. I’m very VERY proud of that. But it’s hard to be TOO proud of simply not stifling someone’s creativity. That should be a no-brainer for any record company and it’s the great tragedy of our business that it’s somehow not. Still, a record company’s main job is to market and sell great music to make a living for its artists and we failed miserably at that. It’s unforgivable.

Also, I hated that name. Ugh. My partners came up with it while I was off signing Gigolo Aunts in Boston, I think. I came back and said “WTF is E Pluribus Unum?” They said “It means ‘Out of the many, the one.’” All I could think was, “Oh great. Out of the many possible names, the one fucking horrible name.”

After this tour with Rob Thomas has wrapped, what’s ahead for you?

AD: Beats me. I’m not really great about thinking ahead. Another record?

Might we ever see a memoir written by you?

AD: No way. I will never understand everyone’s unflagging interest in airing their dirty laundry. There were times you were right and there were times someone else was wrong and, waaaahh waaaahh, nobody understands me and my side of the story, blah blah blah…Is that really a good reason to write a book? It seems to me like a good reason to take a crap but that’s about it.

A writer and I spoke about making a book out of all the interviews and conversations we had over the years, and I could see doing that because at least that’s about music and it’s interesting. But the memoir thing? I don’t think so. It’s nobody’s business but ours.

Is there something you wish more people knew about Adam Duritz?

AD: There probably is, if I think about it, because you don’t really know me unless you actually know me. But I mean, who cares? I can sum up everything that really matters in a sentence or two: I wrote a bunch of songs with my friends and we all recorded them together. It was very cool. It’s still very cool.

Anything you really want to find out about me is in there if you care to look. The rest is just not really important.

Beyond music, when you’re not working, how do you like spending your free time?

AD: I spend time with my friends, I watch movies, and I play too much Sudoku to keep my mind from spinning out of control. That’s about it, really.

AD: Dream and do. That’s all there really is to life. You dream about things and then you go make them come true. Take all your liquid thoughts and make them solid things. It’s a waste of a life to do anything else.