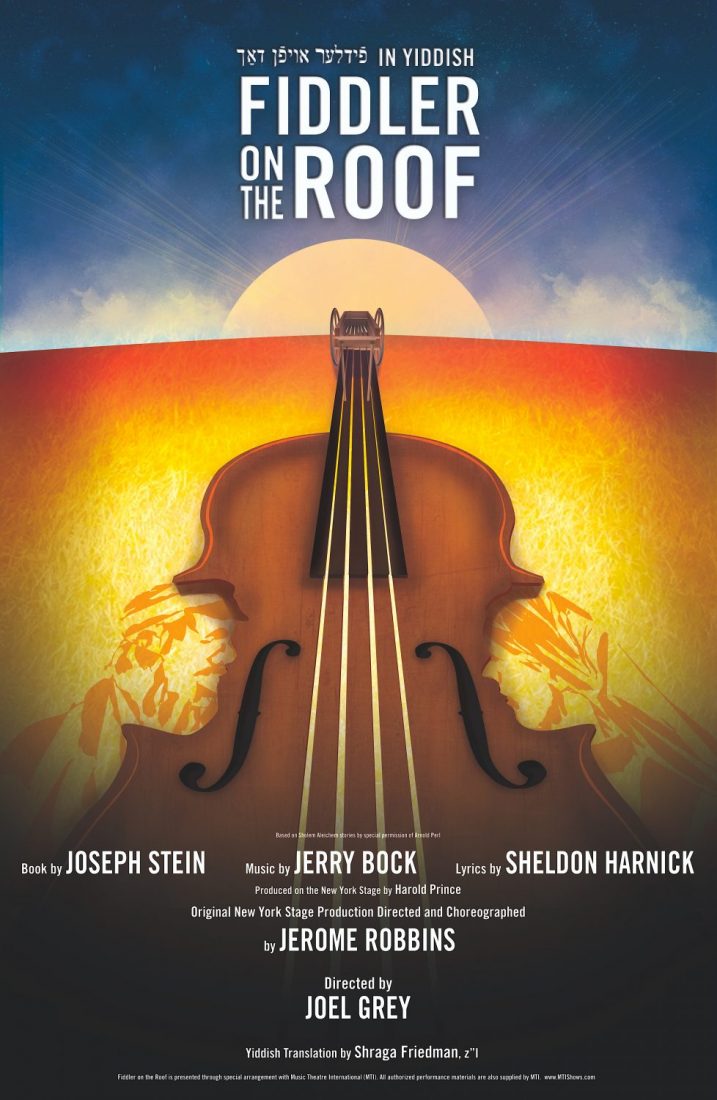 Legendary stage and screen actor Joel Grey will directNational Yiddish Theatre Folksbiene’s United States’ premiere of Fiddler on the Roof in Yiddish in downtown this summer.

“For me, it feels like Fiddler is coming home,” Joel Grey says. “This will be a bold and rich re-imagination, with a highly acclaimed group of theater artists from Broadway that will respectfully re-envision this classic theater touchstone in fresh ways.”

Throughout his illustrious career, Joel Grey has exemplified a stunning artistic ability to enliven the stage and screen through memorable roles, such as George M. Cohan in George M!, the Wizard of Oz in Wicked, and his multiple-award-winning performance as the Master of Ceremonies in Cabaret on Broadway and in film.

One of only eight people to win an Academy Award and Tony Award for playing the same role, he seamlessly transitioned from stage to screen to directing, earning a Tony Award Nomination for his co-direction of the Broadway revival of The Normal Heart in 2011.

Fiddler on the Roof in Yiddish, based on the Tevye the Dairyman vignettes by renowned Yiddish author Sholem Aleichem and translated by Shraga Friedman, has not been staged professionally since its world premiere production in Israel more than 50 years ago. The Off-Broadway production will take place at the Museum of Jewish Heritage, Edmond J. Safra Plaza, 36 Battery Place, NYC, from July 4 through August 26—presented in Yiddish with English and Russian supertitles.

“We are proud to announce that Joel Grey, one of the most respected artists of our time, will be directing the first Yiddish language version of Fiddler on the Roof in U.S. history,” says National Yiddish Theatre Folksbiene Chief Executive Officer Christopher Massimine. “When NYTF presented Joel Grey with a Lifetime Achievement Award five years ago, we lauded his accomplishments on stage, in film, and on television, and at the heart of all of this work has been a commitment to providing audiences with captivating performances. We are excited that he will bring this same inspiration and creativity to this unprecedented presentation of Fiddler on the Roof.”

Tony Award- and Pulitzer Prize-winning lyricist Sheldon Harnick and legendary producer and director Hal Prince – who was the original producer of Fiddler on the Roof – have been consulting with NYTF on the production.

“Joel Grey is a terrific director. He is well-versed in the material – it’s in his bones,” Hal Prince said.

Joining Mr. Grey for the production are Tony Award-winner and multiple Tony Award-nominee Beowulf Boritt, Set Design, whose credits most recently include Come From Away, Prince of Broadway, Hand to God, On The Town, A Bronx Tale, and Rock of  Ages; and, Ann Hould-Ward, Costume Design, Tony winner for Beauty and the Beast and Tony nominee for Into the Woods and Sunday in the Park with George.

“The Yiddish translation connects the masterpiece by Jerry Bock, Sheldon Harnick, and Joseph Stein to the source material by Sholem Aleichem in a very moving way.  It enriches the way that an audience in 2018 will understand the culture, language and customs which sustained the Jewish people for a thousand years in Eastern Europe and how modernization forever changed it,” said NYTF Artistic Director Zalmen Mlotek.

Fiddler on The Roof features music by Jerry Bock, lyrics by Sheldon Harnick, and book by Joseph Stein. The original Broadway production of the show, which opened in 1964, was the first musical theatre production in history to surpass 3,000 performances; the show won the Tony Award for Best Musical as well as eight other Tony Awards in 1965, and since has been performed in every metropolitan city in the world, from Paris to Beijing.

The Yiddish translation was artfully crafted by noted Israeli actor/director Shraga Friedman in 1965, and deepens the connection of the work to Aleichem’s original stories. Friedman, a native Yiddish speaker, was born in Warsaw and escaped a War-Engulfed Europe with his family, making their way to Tel Aviv in 1941.

Friedman, well acquainted with the Aleichem’s works, used his translation to infuse Fiddler with literary references to the original Tevye Stories as well as other stories by the beloved author (i.e. “If I Were a Rich Man” is translated into Yiddish as “If I Were a Rothschild”).

Born in Cleveland, Ohio, Joel Grey started at an early age on perform on stage, making his professional debut at the age of nine as Pud in the Cleveland Playhouse production of On Borrowed Time. The son of Goldie “Grace” and actor, comedian and musician Mickey Katz (who won regard for his Yiddish-English comedy songs), Joel Grey’s theatre career took off in the early 1950’s, with credits that have included Chekhov’s The Cherry Orchard; Anything Goes; Wicked; Chicago; George M! (for which he was nominated for a Tony Award); and, Cabaret (for which he won a Tony Award in 1966). He played the role of Ned Weeks in the Public Theatre’s original Off-Broadway production of Larry Kramer’s seminal play The Normal Heart in 1986, and co-directed the Tony Award-winning Broadway premiere in 2011.

His film credits include Cabaret (for which he won an Academy Award for Best Supporting Actor in 1973); Buffalo Bill and the Indians; Remo Williams: The Adventure Begins; Dancer In the Dark; and The Seven Percent Solution. On television, he appeared on Alias, Oz, Buffy the Vampire Slayer and Grey’s Anatomy, among other shows, and won Golden Globe and Drama Desk Awards. In 2013, he directed On Borrowed Time at the Two River Theater. His memoir, Master of Ceremonies, was released in 2016 (Flatiron Press).

NYTF is collaborating with filmmaker Max Lewkowicz of Dog Green Productions, who is creating the musical’s official video documentary, Fiddler. “Fiddler on the Roof has always been part of my background in terms of understanding musical theatre,” said Max Lewkowicz. “But as I got older I began to realize a lot of things about the piece; it’s not a simple musical, it’s very complex, and what makes it amazing is that it deals with so many different themes that we as human beings can connect to.”