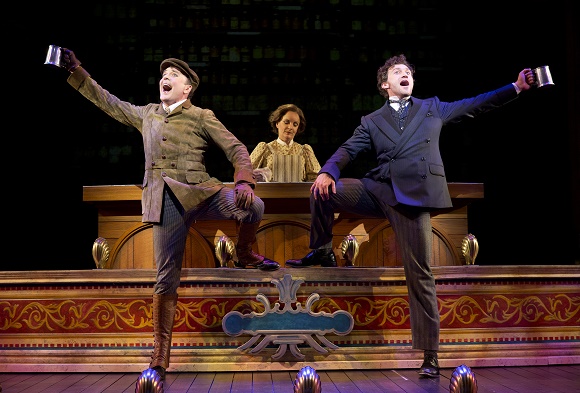 Many of us have wondered what our lives would be like if we found ourselves with an immense fortune. The road to riches normally requires hard work; it’s full of obstacles that must be persevered before fortune can be found. Of course, there are the few cases when a person is born into a fortune, with a silver spoon in their mouths. The legacies of millionaires and royalty face fewer challenges thanks to inheritance passed down to them.

A Gentleman’s Guide to Love and Murder is a story of inheritance earned through wrathful determination. The events of the musical unfold through flashback, as Monty Navarro (Bryce Pinkham) is in a jail cell writing a journal recounting the events leading to the eve of his possible execution. His first recollection begins with his days as a common Englishman in 1907, when he learns his recently deceased mother was an abandoned member of the royal D’Ysquith family. Upon realizing he is ninth in line to inherit the throne of Highhurst, Navarro decides to murder the eight D’Ysquith’s who stand in his way of opulent living.

Gentleman’s Guide was the recipient of four Tony awards at this year’s ceremony out of 10 nominations, more than any other production and taking home the coveted Best Musical and Best Book awards. Each of those victories was well-earned as the musical presents a spectacular display of one man’s greed wrapped in an uproariously funny show.

The musical is a grand showcase for all of its actors. Pinkham conveys Navarro’s diabolic intentions while also giving the audience a view into the character’s conflicted motivations. As he gets closer to his goal, Navarro must also deal with two women vying for his heart. Pinkham plays his one character to perfection, but the entire D’Ysquith family is portrayed by one man (Jefferson Mays), who completely dominates the stage with eight characters, each one funnier and more engaging than the last.

One of the most important aspects of a musical is, of course, the music. The songs of Gentleman’s Guide are just as funny as the dialogue spoken by the characters. The show opens with lyrics warning those in the audience with weak constitutions to leave the theatre, but irony is abound as even the most brutal events of the productions are delivered with punctual comedic timing and catchy tunes that will make you tap your toes, and leave you aghast and laughing all at the same time.

A Gentleman’s Guide to Love and Murder is a near perfect Broadway show. A show characterized by the murders of an entire family seems like an odd fit for a musical comedy, but the production is a perfect blend of foul and funny. Filled with terrific performances and every emotion on the scale of sensation, A Gentleman’s Guide to Love and Murder leaves nothing to be desired. The themes of selfishness and death have never been as hysterical as they are here.