A Conversation With Paddy Boom 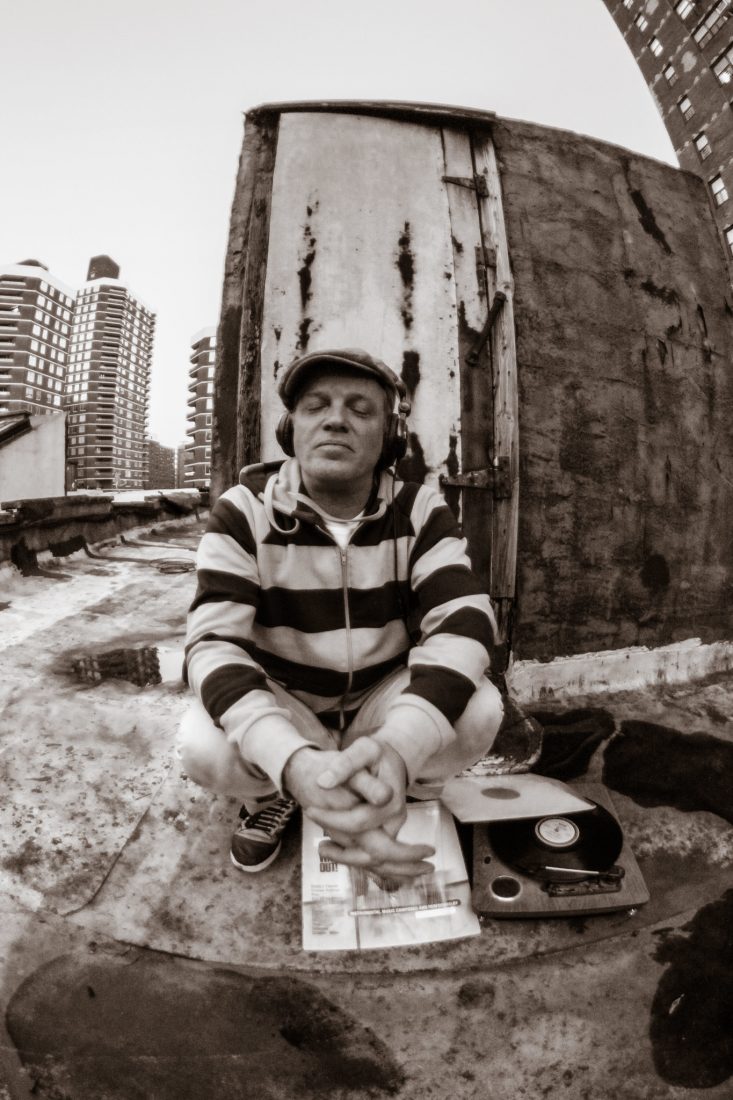 All photos by Alice Teeple

You’d never know it was pouring outside Artists & Fleas. Thunderbolts and lightning dot the skies over Chelsea Market, but in here, the vibe is mellow. The DJ booth is blaring War’s Low Rider as shoppers mill about, heads bopping. At the helm of the turntables is Paddy Boom, greeting passersby with high fives.

“Check these out! Painted them myself,” he says proudly, pointing to his feet, shod in silver sneakers. “Gonna look cool when they start peeling.”

Paddy Boom, né Patrick Seacor, has been a fixture on the LES for three decades. The former Scissor Sisters drummer also plays with the legendary band Faith, and fronts a new experimental outfit called Death By Comfort, which debuted at Parkside Lounge in June.

“We don’t have actual songs,” he explains, “but I have a Gil Scott-Heron vibe. I’ll speak poetry while we jam. Sometimes songs are fourteen minutes long. Remember the kid’s show Wonderama? They’d ask someone in the audience for good news. I do that with my audience, but chant DEATH BY COMFORT. Every show’s an exorcism.”

Life took a U-turn for Paddy after his 2007 departure from Scissor Sisters to care for his mother. A series of devastating blows ensued, including his savings depleted by an investment fraudster. It speaks volumes that he has “I REFUSE TO LOSE” tattooed on his left arm. He is, however, embracing voluntary loss.

“I’m losing attachment and possessions; abandoning the idea of constant more, more more,” he explains. “I’m shedding everything. My apartment is so minimal now. Mom used to say ‘possessions possess you.’ I suddenly had to go from a big house to a one-bedroom. All I need is a place to put my book down. I feel free. I appreciate what I’ve got. Pared it down to special things with real meaning. You don’t have that perspective with a consumerist mindset; you get numb and hungry…death by comfort.”

In addition to performing, Paddy Boom is often seen biking through Lower Manhattan, records strapped to his back for DJ gigs. Curious about the band he’s spinning? Get ready for a music history Epic of Gilgamesh. Dude knows his shit, AND half the performers. Which comes to his next adventure: event hosting.

The other iron in the fire is an upcoming book about his Scissor Sisters days: “Most of it is already written! I kept so many journals when we were touring.” Paddy loves spinning yarns as much as he does tunes, so stay tuned.

This hustler of culture is ready to write the next chapter of life.