Celebrating 25 Years of Taste of Tribeca 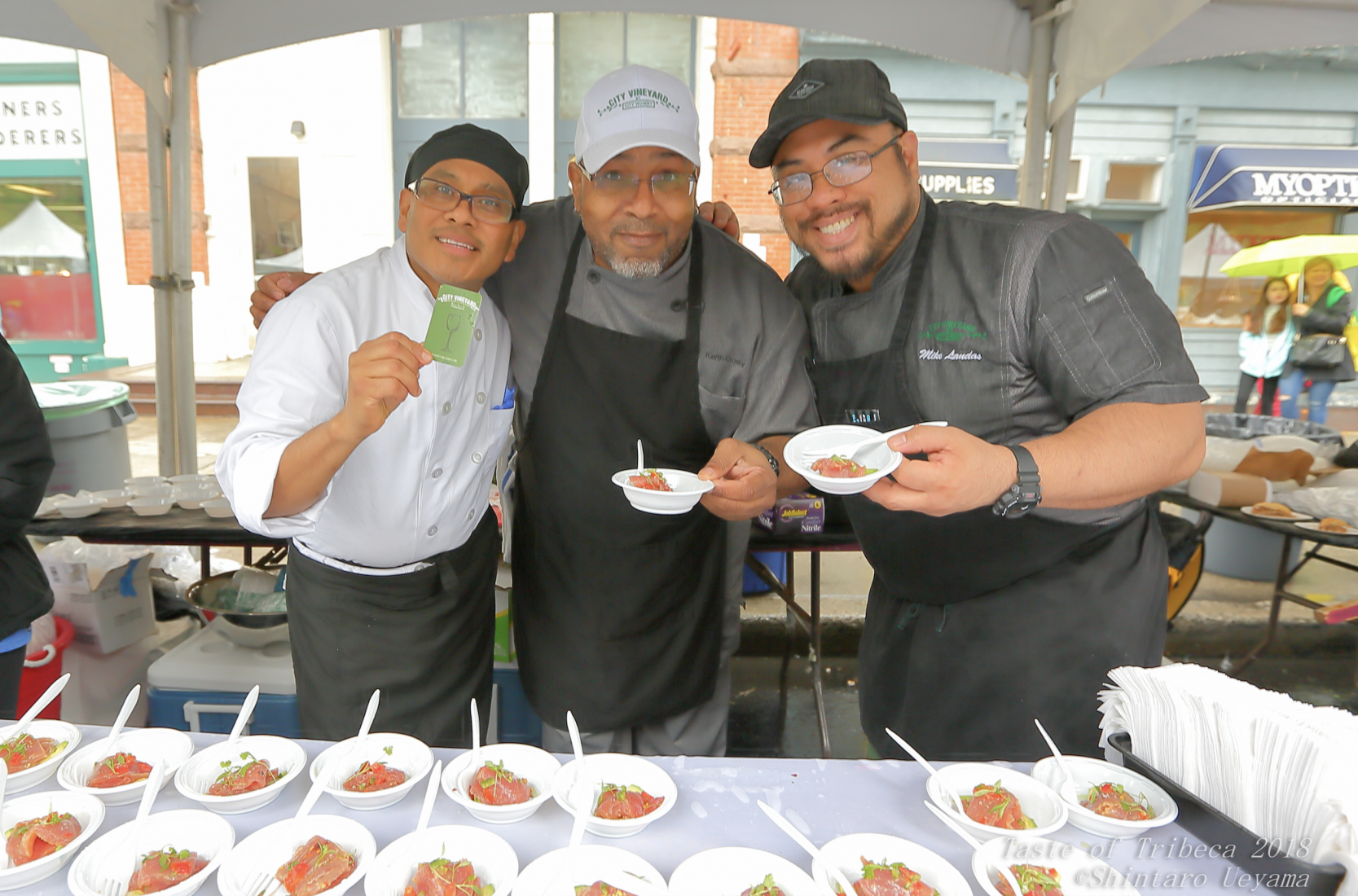 In honor of Taste of Tribeca’s 25th iteration we chatted with four people involved: Tracy Nieporent, Director of Marketing & Partner of the Myriad Restaurant Group whose restaurant Tribeca Grill has been part of the event since its inception, Franco Vlasic, Owner of Holy Ground, Matt Abramcyk, Owner of A Summer Day both of which are joining the festival this year, and Bettina Teodoro, co-chair of Taste of Tribeca.

Downtown: What does it mean to have been part of this event for its whole life?

Tracy Nieporent: It’s very meaningful for Tribeca Grill to be celebrating 25 years as an original participant in Taste of Tribeca. That’s a quarter century, which is a significant amount of time in everyone’s life! The Tribeca neighborhood has changed and evolved in many ways over these years. The Tribeca Grill has been the site of many memorable celebrations, and the Taste of Tribeca gives us the opportunity to support our local public schools in a festive setting with our neighbors.

Downtown: How did you get involved in the first place?

TN: Tribeca Grill is now in its 29th year, and has always been civic-minded in supporting a wide variety of charitable causes. We have a deep commitment to the neighborhood, whether it’s sponsoring a Little League team or the local schools, and participating in an important local culinary event is a tangible way to help.

Downtown: Why is it so important to have this event?

TN: As a product of NYC’s public schools, I know how important it is to support them. But it’s also an opportunity to bond with our neighbors in a celebratory environment. It’s wonderful when a guest comes to our booth and says that they were a young student during the early years of Taste of Tribeca, and are now starting their own families. That is an amazing feeling. With all the changes in the Tribeca neighborhood, the feeling of community is strong and vital.

Downtown: How did you get involved with Taste of Tribeca?

Franco Vlasic: Our partners have been doing Taste for years!  We have watched over the years just how impactful and fun a neighborhood gathering is.

Downtown: What does it mean for your restaurant to be included?

FV: Being a part of the Tribeca neighborhood and community has been important to us since day one. Intertwining our restaurant’s identity with the neighborhood’s rich history was something we spent a lot of time considering before we opened and thus “Holy Ground” is named for what the area was known as to locals in the mid 1700’s. We take a tremendous amount of pride in being a Tribeca restaurant and we look forward to getting to serve our neighbors!

Downtown: What are you most excited about?

FV: For us it’s a fantastic opportunity to give a little taste of what Holy Ground is all about to members of the community that may not know about us yet, we’re definitely most excited about that. We are also really excited to support other local businesses, that’s what the essence of community is really all about. Plus, there is truly no better way to kick off the summer season than serving our neighbors BBQ!

Downtown: How did you get involved with Taste of Tribeca?

Matt Abramcyk: Our partners and sister restaurants have been doing Taste for years.   We wouldn’t miss it as we have seen how much it brings the neighborhood businesses and people together. With today being such a digitally focused world, we believe the most powerful marketing is being able to meet our neighbors in person. Being a new restaurant in Tribeca and having the opportunity to meet our neighbors face-to-face, serve them great food, and hang out with them is every restauranteurs dream!

Downtown: What does it mean for your restaurant to be included?

MA: We are a true part of the local community. We have the opportunity to support other local businesses which always creates a positive impact on a community. We also get to learn about our neighbors, talk to them, and let them know the doors are officially open to Summer Day! Nothing brings people together more than good food and we are excited to be able to contribute to that.

Downtown: What are you most excited about?

MA: Having the sun shine over all our friends and community members, making “A Summer Day” into reality! Our restaurant exudes that “feel good” experience of hanging out with friends and family, eating good food, drinking rosé and cocktails, listening to music, watching the kids run around…the essence of a perfect summer day. Taste of Tribeca allows us to share that experience, we couldn’t ask for anything better!

Downtown: How did Taste of Tribeca start?

Bettina Teodoro: Taste of Tribeca was started on the shipping dock of the former Bazzini building on Greenwich and Jay, where Sarabeth’s is now, by a small group of PS 150 parents in response to cuts to the school’s art budget. Tribeca was an artists’ neighborhood and they believed the school should have an excellent art program. At the same time, Tribeca was becoming a dining destination, so the parents developed the idea of a fundraiser built around restaurants offering tastings to promote themselves. They worked with the local restaurateurs and community leaders, and the idea took hold. For the first few years, Taste of Tribeca was held on Jay Street because the Bazzini company generously provided all kinds of infrastructure support, but within a few years it outgrew that space and moved to its present location on Duane Street.

Downtown: What does it mean to be at the 25 year mark?

BT: Taste of Tribeca exists because different groups — parents, restaurants, and sponsors — come together and make it happen. It takes incredible effort on everyone’s part to pull off this one-day event, and that we are still doing this after 25 years shows the strength of our community.

Downtown: What have some challenges been throughout the 25 years?

BT: I can only speak about my involvement for the past six years, and as co-chair for four. Our goal is to produce a high-quality event that looks and feels like it has been produced by professionals, when in fact we are parent volunteers from all different backgrounds. It isn’t easy, but we owe it to our supporters to give them an effortless and enjoyable experience.

Downtown: What are you most excited about this year?

BT: Seeing all of these great restaurants and local businesses come together is always exciting. In addition, this year we have a very special guest: Chef David Waltuck, the owner of the former Chanterelle, will be serving alongside his colleagues from the Institute of Culinary Education in nearby Brookfield Place. Chanterelle was one of Tribeca’s first fine dining restaurants, and it participated regularly in Taste of Tribeca until it closed in 2009. Chef Waltuck readily agreed to return for our 25th anniversary and we’re thrilled to have him. Finally, as an eco-nut, I’m proud that we are eliminating single-use plastic bottles from this year’s event!

Downtown: How did you decide to ditch the single-use plastics?

BT: There are too many disposable products in this world, and we can’t recycle it all. At Taste of Tribeca, we could easily produce 50 bags of recyclables over the course of one day. We resolved to cut into that. So instead of handing out bottles of water, we will have on hand two NYC Water On The Go stations so our festival-goers can help themselves to a complimentary and unlimited supply of cold tap water. They can drink directly from the fountain or fill their own reusable bottles. This is a work in progress. We haven’t yet found an affordable and sustainable alternative to plastic cutlery, but that is next on our wish list!